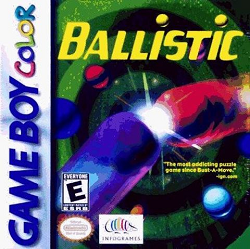 In this review, we match things up with the puzzle game Ballistic. We find out if this Game Boy Color game is worth playing again.

This game was released in 1999 and was also known as Puzz Loop in Japan.

The field features a spiral that loops around about one and three quarters around to an end line. Balls of various colors start appearing from off screen and work their way around to the center. At the center is where you shoot more balls into this loop. If three or more of the same color balls connect, they vanish. If you let the balls make it to the center, then it’s game over for you. If you eliminate one set and the result causes three more colors to touch, then you score a combo, eliminating those in the process. This is a great way to avoid imminent danger of losing the game.

As time goes on, you’ll advance through levels. If you reach a certain level, then more colors get introduced. You start with red, blue, and yellow. You’ll get grey, green, purple, and who knows how many additional colors with various shapes in them.

There are three modes. The first mode is panic mode. This mode is basically just a regular endless version of the game. Keep playing as the levels progress until you lose the game. You’ll get to post a high score if you do well enough.

The final mode is called time attack mode. In this mode, you have to clear a predetermined number of balls before clearing the level. This is a timed mode, so the faster you get to your target, the better.

Do note that this game also has the option of easy, medium, or hard in terms of overall difficulty in the options menu. By default, you get the medium difficulty.

When I say the title, I thought it was going to be the 16-Bit Windows clone of Arkanoid ported over to this system. I was surprised when it has nothing to do with either game. Instead, it was basically a highly stripped down version of Bust-A-Move.

This is probably one of the shortest games I’ve played in a long time. It took less than an hour for me to get a good idea of what the game is all about. In that short period of time, I also got bored quickly. While I get that this game is unique, I thought this game example of why unique doesn’t necessarily mean it’s a good game. The learning curve is pretty much non-existent, but the depth of this game is almost wafer-thin. Once you get the basic premise of the game, there’s little else to experience in this game.

One oversight in this game is the fact that the developers never separated the high scores between the difficulties. If you play the hard mode, then play the easy mode, chances are, you’ll get a higher score from the easy mode and you’ll top the score board. As a result, easy mode is a way of cheating in this game as hard mode puts you at a huge disadvantage.

Generally speaking, this game is a very basic puzzle game you’ll get bored of quickly.

Graphically speaking, there really isn’t a whole lot to say about it. While it got the job done, there was nothing hugely impressive with this game either. The various menu screens do certainly try to be expressive, but there was hardly any wiggle-room in-game.

The audio was OK, but nothing huge. The sound effects were a bit basic. The music was also not exactly noteworthy or memorable.

Overall, this game is too simple for its own good. While it tries to be unique with the spiral system, it comes off as simply a stripped down 360 degree stripped down version of Bust-A-Move. You’ll spend 1 minute figuring out the game, and 30 minutes of playing through the modes before getting bored of it. Definitely nothing I would recommend.

Overall
Furthest point in game: Got the top score in both Panic and Time Attack mode. Completed one level in the CheckMate mode.