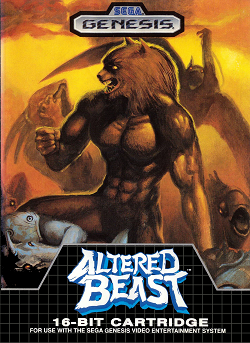 In this review, we rise from our grave in the Sega Genesis game Altered Beast. We find out if this beat ’em up game is worth a play.

This game was released in 1989. It is a port from the arcade game.

The basic story is that Zeus has resurrected a warrior from the dead. Now with a new life, the warriors task is to rescue Zeus’ daughter.

In the first level, you take on the hoards of the undead. As yo travel along, you’ll notice blue wolves that run by you. Defeat them and you’ll see a small item hover upwards. Collect this item and you get a power up. Collect three power-ups and you’ll transform into the altered beast on the level.

If you encounter the game foe without being fully powered up, the enemy will flee and you’ll be forced to take on an additional leg of the level. So, getting the power-ups early on can be crucial for your advancement in the game itself.

In total, you have three lives to work with. Lose all three lives and it’s game over. You have three dots of life to work with for each life. Sometimes, when you take damage, it doesn’t wipe out an entire dot. Instead, it will change from blue to another color like yellow, orange, or blue.

One stumbling block for this game is the difficulty. I can’t seem to really get past the second level boss, though I have been able to do a nice amount of damage on it in the fight. It seems other players found the difficulty to be a bit much as well.

Thanks in part due to the difficulty, the length is also pretty short. It’s easy to die off early, even when you are careful with your movements.

In spite of this, the game has a certain fun factor to it that makes the game worth playing. Some of that can be attributed to the fact that the game, at the very least, gives you a small chance towards the beginning. Enemy movements can be predictable, which means it’s more than possible to figure out how to take little damage in various parts of the game.

Generally speaking, this game has its flaws. The difficulty and length are two big ones for me. Still, there is plenty of variety and the game does provide learning opportunity for the players along the way. So, it isn’t that bad of a game at all.

Graphically, this game is pretty impressive for the time. The characters are well animated and well drawn out. The effects are pretty decent as well, even if they are a bit cheesy by today’s standards. Keep in mind, this game was released a year after games like Double Dragon and Contra. It was also released on the same year as Bad Dudes and The Adventures of Lolo. The graphics and detail are almost comparable to SNES titles which hit the market four years later. So, I would say the graphics are very well done.

The audio is also quite impressive. The music is pretty good for the time. The real crown in jewel for the game is the voice samples which is a rare novelty for console games at the time. Not only are there voice samples, but also the fact they were pretty crisp in terms of quality. Combined with pretty decent music for the time, I’d say the audio is very well done.

Overall, I wasn’t sure what I was going to get while playing this game. coming out of this, I can honestly say I am pleasantly surprised how much this game has to offer. The variety between levels is great and the gameplay is pretty action-packed. This game is far from perfect thanks to the short length and difficulty. Still, there is a certain level of entertainment to be had from this game anyway. The graphics for a console game at the time is actually impressive. It gives NES titles at the time a serious run for their money. The audio is also nicely done – especially with the quality of the voice samples. A game worth playing.