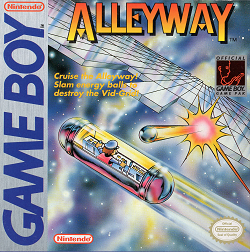 In this review, we bust up some blocks in the Game Boy game Alleyway. We find out how well this action puzzle game plays.

This game was released in 1989. It is one of a small number of launch titles.

While the game adopts some images from the Mario franchise, this game is largely a clone of Breakout.

You play a paddle and the goal is to break every breakable block without letting the ball fall into the pit below.

This game has a number of features that appear as you progress through the levels. In some levels, you have blocks that rotate and wrap around in the field. There is also a bonus level you encounter every so often. In this level, the ball travels straight through the blocks, breaking every one of them along the way. While you get a number of points in this level, you also have a limited amount of time to get them in.

As you progress to more difficult levels, the paddle will shrink if the ball touches the top of the playing field. This makes things more difficult.

In addition to this, the ball will travel more quickly as more blocks get removed from the playing field.

Considering the limitation the Game Boy has to offer, the controls are surprisingly good. You can move left and right as you would expect. However, you can adjust the speed with the A and B buttons. A button speeds up the paddle while the B button slows it down. I find that using the A button is rare and only used in extreme circumstances. More often, however, I end up using B a lot to fine tune the angles. This feature definitely gets a thumbs up from me.

A lot of people, however, liken this game to the game Arkanoid. Indeed, there are a lot of features borrowed from early iterations of the game (Doh It Again is a later iteration). This includes shrinking paddles, the ball traveling straight through blocks, and unbreakable blocks.

What I also noticed is the fact that the moving field resembles a feature found in another Breakout Clone, Fireball. If you play the migrating game, you’ll notice blocks moving around as well.

The only real feature that this game brings to the table is the use of the A and B buttons to manage the speed. This does make the game more manageable, but it is also likely a feature made out of necessity more than anything else.

Another thing people criticize this game for is the fact that it gets boring. While I wasn’t bored stiff, this game does get bland and repetitive after a while. This is, definitely not the most boring game I’ve ever played, but this game is far from exciting after a while.

One good thing about this game is the fact that this game features reasonable ball physics. Breakout had a tendency to have weird physics with the ball itself. This game, at the very least, fixes this problem.

Generally speaking, while the bonus levels and moving blocks do make for some interesting gameplay, features like this are hardly new in the world of Breakout clones. The ball physics are pretty solid and the controls are very well done. Unfortunately, the game also gets pretty repetitive after a while.

The graphics are very basic. This game also has the unfortunate habit of getting the ball to move quickly enough to generate screen blurring. This does get in the way of gameplay a little. While there is some interesting details in some parts, you have to go through the game with a fine-toothed comb just to get some decent graphics. Passable, but nothing exciting.

While there is a few tracks in this game, in-game itself is very stale. With limited sound keeping players occupied, this only serves to amplify the repetitive and dull nature of this game. This game needed to do better in this area and it didn’t really perform that well.

Overall, this is a very weak launch title. A lack of innovation really hurt this games chances for success. Repetitive play also didn’t earn this game many favors either. While I do applaud the controls, it’s hard to find ways of giving praise for this game. The graphics are very basic and the ball even suffers from blurring when it gets up to speed. The audio quality is barely present in this game as well. Probably a game you should skip over.