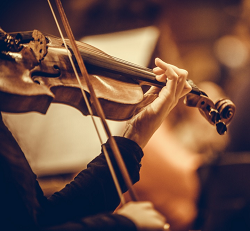 Copyright fraud and abuse is a longstanding and all too common problem on platforms like YouTube. It is also hitting classical musicians hard.

Copyright fraud and abuse has caused widespread damage to both creativity and free speech. People who don’t own content abuse the system to take down content they don’t own. Sometimes, it’s the comparatively innocuous reason of a false positive generated by the notoriously bad copyright bots. Other times, it’s a much more malicious case to silence perfectly legal free speech or to extort money out of victims.

We’ve seen the whole spectrum of examples of this problem. Last month, we saw C-SPAN get hit with copyright fraud over public domain material. That is likely a case of a false positive.

On the other side of the spectrum is one of the more extreme examples of malicious copyright fraud. Last year, we covered the case where a copyright troll sent DMCA takedown notices to YouTubers over content the troll never owned for the purpose of extorting money from them. When YouTubers refused to comply with the extortion, the troll would utilize the information in the system to SWAT them in an effort to further pressure the YouTubers to pay the extortion money. It was a case so extreme, YouTube actually stepped in and sued the troll.

We really could go on and on with our examples, but the latest one we are learning about revolves around classical musicians. With the COVID-19 pandemic, many of these live performers find themselves to be without access to an audience. So, a number of them decided to get creative. They took their talents and skill and moved online. They are sharing their skills by playing public domain classical music for audiences on social media. It’s a great way to get around COVID-19 restrictions, maintain the skills, and, more importantly, reaching your audience. Perhaps what is even more important is the fact that all of this is legal. The sheet music has fallen into the public domain decades ago and they are playing the music with by their own hands. In short, it is, legally speaking, their own work at this point.

Of course, just because it’s legal doesn’t mean it is immune to DMCA takedown notices. As many readers of this site know by now, anything, no matter how legal it is, can be subject to DMCA takedown notices anyway. That is the case with these classical musicians who are now facing waves of copyright abuse on social media. From The Washington Post:

That is, until that recent Sunday, when his audience started to disappear, one by one, all the way down to none.

“What the hell is going on?” Spence recalls shouting to his son across the living room as the viewer count conspicuously dropped. Just minutes into the airing of the concert, Facebook issued Spence a notification that his video — an original performance of an hour-long piece composed by Mozart in 1786 — somehow contained one minute and 18 seconds of someone else’s work, in this case, “audio owned by Naxos of America.”

Spence, and presumably Mozart, would beg to differ.

“They’re blocking my use of my own content,” Spence said later in a phone interview, “which feels dystopian.”

But classical musicians are discovering en masse that the perceptivity of automated copyright systems falls critically short when it comes to classical music, which presents unique challenges both in terms of content and context. After all, classical music exists as a vast, endlessly revisited and repeated repertoire of public-domain works distinguishable only through nuanced variations in performance. Put simply, bots aren’t great listeners.

After the removal of his clips, Spence’s only recourse was to file a dispute with Facebook by filling out a single-field form. This was followed by six hours of fruitless chats with various Facebook representatives. It took nearly four days to clear the spurious claim, and in the interim, Facebook suspended Camerata’s access to live-streaming.

Clearing copyright claims has since become part of Spence’s new routine, casting emails into an opaque dispute system he describes as “the DMV on steroids.”

And the hits keep coming: YouTube blocked a recent live stream of a recorded Camerata performance of Carl Nielsen’s Wind Quintet, Op. 43, after it attracted a swarm of five automated copyright claims from different record companies. It’s gotten to the point where Camerata videos are prefaced by a warning screen, explaining their anticipated disappearance in advance.

For a lot of these performers new to places like YouTube and Facebook, this whole concept of posting perfectly legal content and getting hit with copyright claims is a novel concept. The article leaves the impression that there is this flaw in the system only recently discovered. However, this flaw has been around for years. Multitudes of YouTubers have long complained about how perfectly legal content has been falsely taken down.

Back in December, long before the pandemic gripped the whole world, one YouTuber fed sheet music into a MIDI synthesizer. He then shot footage of bees. After that, he combined the two and posted it on YouTube. The music was derived from public domain material and the footage was shot himself. Everything about he video is perfectly legal. That didn’t stop the copyright trolls from taking down his content anyway.

In fact, last year, YouTube issued new tools for handling copyright claims. This after years of backlash over the critically flawed ContentID system and subsequent dispute system. When those tools were released, they only served to disappoint because it only allowed YouTuber’s to cave to complaints faster. In short, it ultimately solved next to nothing.

Moreover, digital rights organizations and advocates have long argued that content creators need protection from the Copyright DMCA systems in place now. Such reasonable calls often get responded to by false claims that those people believe that infringing activity is free speech and that the people making the arguments shouldn’t be believed. This despite the mountains of evidence of pointing to the contrary. Instead, the corporate lobbyists only concern is how to restrict copyright even further and allow the system to be even more susceptible to abuse. That is ultimately where we stand today.

So, for those classical musicians just joining us in this copyright debate, welcome to the fray. Your perfectly legal activities will get viewed as though you are just another evil copyright scofflaw. Sorry it is distressing, but this is the kind of shenanigans we’ve been fighting against for years. Just know that you are in good company at this point. This example of what is wrong with copyright in the US will get added to the pile over there.