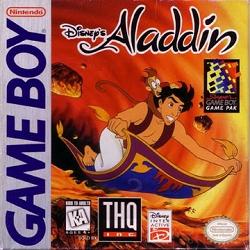 In this review, we ride the magic carpet in the Game Boy game Aladdin. We find out how well this adventure game plays.

This game was released in 1995. It is the second to last port ever released.

You play the character Aladdin. He is a thief that becomes a person of interest to the grand vizier, Jafar. Aladdin is guided on a quest to the Cave of Wonders to retrieve a lamp from the forbidden treasures and return it.

While your objectives in the different levels do vary, you are always told what to do during the cut scene between levels. You also get a message at the beginning of the level to tell you quickly what you need to do. Sometimes, the objective is to just make it to the end of the level. Other times, you need to collect an item or two.

Along the way, you encounter a number of obstacles. Sometimes, the obstacles are spiked floors. Other times, the obstacles are gaps. You can jump on spring-like poles protruding from walls. You also avoid small swinging wrecking balls. Sometimes, you move along horizontal rope with your hands. In other times, you find yourself climbing and jumping off of vertical rope. Suffice to say, there are plenty of things you encounter to make things more interesting.

There are also a number of enemies you fight with. The most common enemies are guards. The two most common guards are the ones that swing a sword at you and the one that throws knives at you. Other guards can swing other weapons at you. Other enemies in the game include knife throwing statues, knife spitting fish, and even deadly snakes.

Aiding you are two different attacks. You have the sword swing. You can duck and stab or you can deliver a standard slash. This weapon offers short range, but plenty of power. The other weapon you have are bombs. You have a limited supply of them. While the power is not as good, the range is much greater. Good for dispatching enemies at a distance.

While the bombs come in limited supplies, you can collect them as an item throughout the level. In fact, this is probably the most common item pickup you can locate.

Another item pickup is the lamp. With one exception, the lamp kills off all enemies on the screen the moment you pick it up.

A more useful item, however, is the heart. The heart restores some of your health. Do note that your health is denoted by the vapor coming from the lamp on the lower banner. Run out of vapor and you are on your last hit.

You can also pick up gems. While the gems don’t appear to do much, you can spend them on the salesman you can randomly encounter. A free life is worth 5 gems while the other item (often a wish) is worth 10 gems.

On a rare occasion, you can collect Aladdin tokens. Each token grants you an additional life.

After you beat the level, you can play the genies bonus game. This game involves an item located in the genies mouth. This item quickly changes from one item to the next. Randomly thrown in are “lose” icons. Get this item and you lose the game. If you press “A”, you use a genie token and collect whatever item you stopped it at. Useful for upcoming levels.

One positive point to be made here is on the difficulty. On the default medium difficulty, I found the game to be about right. Some areas are a bit challenging while others simply test your problem solving skills.

The most painful aspect of this game is the fact that this game sacrifices playability for cinematics. If you fall down a short distance, you’ll do a well drawn out animation for Aladdin to get back up. While this looks pretty nice, your controls are locked for the course of the entire animation. If an enemy is standing over top of you swinging a sword, you are going to get hit the second you regain control. This is a pretty annoying element in the game.

Another problem is ropes. The game detecting you getting close enough to a rope to hang on can be very hit or miss. Sometimes, you have to move back and forth over top of it until the game finally realizes you can grab hold of it. Other times, the game can’t help but latch you onto them with no effort. It’s pretty hard to tell what you are going to get until you try to get on one to climb up. Kind of annoying if you ask me.

Another point is that the game is a little on the short side. While the game is able to challenge you in a number of areas, it’s also possible to beat the game in about 3 hours. I’ve played Game Boy games released earlier that take more than a day to complete, so this is short by the standards of others that I’ve played.

In addition to this, the ending is very anticlimactic. It’s one of those endings that basically says, “You win!” “Game Over”. Ouch. While there is a small animation of Aladdin and Jasmine flying away while the credits are shown, it is still a punch in the gut to me.

Still, the level design in the levels is fairly well thought out. It can be a little confusing at times (especially when it comes to what happens after you die in the middle of the level), but the general concepts are pretty sound. You even have a large number of environments you run through in the process.

Overall, this is one of those games that has its flaws, but isn’t too bad. It is a little on the short side and grabbing ropes can be buggy. Hard falls can also be annoying. Still, the level design is pretty sound and the difficulty is about right. A decent game all around.

Graphics can be a bit buggy. There are the occasional items that seem to vanish in later levels. While everything is nicely drawn out, the contrast becomes an issue from time to time. Trying to tell platform from wall can be difficult – especially in the dungeon level. Blurring is also a bit of an issue in this game. Animation sequences in the sprites are nicely done, though.

The audio can be a bit limited. While what is in there is pretty good, you don’t get much in quantity. In fact, the final stage repeats one of the bright and cheery songs. In my view, a mismatch in theme if you ask me. Sound effects are pretty decent, though.

Overall, this is pretty good, but flawed game. The ropes are glitchy, the game is short, and the ending is pretty disappointing. Still, while there is limited levels, the levels that are there do take you through a wide variety of environments. The difficulty is also about right. The graphics are a little buggy with items disappearing and the occasional slowdown. Contrast can also be a bit of an issue on some levels. Blurring is also a minor issue. The music is good, but too limited for my taste. The sound effects are OK. An overall decent game.

Overall
Furthest point in game: Beat the game on the default medium setting.