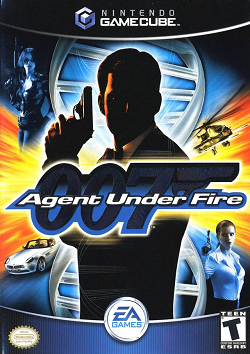 In this review, we find ourselves once again saving the world in another first person shooter bond game. This time, we are playing 007: Agent Under Fire for the Gamecube.

The plot follows James Bond as you investigate a weapons smuggling ring. Agent Nightshade has been discovered and captured. As you investigate, Bond finds out that the operation involves a cloning conspiracy against various political leaders around the world (which sounds quite a lot like the plot from Hybrid Heaven, really).

A number of features that appeared previously reappear in this game. The most obvious reoccurring feature for us was the difficulty system. While the names are slightly different, you do get a sort of easy, medium, and hard mode. These are “Operative” (easy), “Agent” (medium), and “00 Agent” (Hard). Unless we missed something in the gameplay, one notable difference is that there is no 4th difficulty (a custom difficulty). So, whatever the settings are in the difficulties, that is all you get to play with.

While that is a similarity in the game, there is one big difference between this and Goldeneye: what changes in each difficulty as you play the level. While enemies are harder to kill and you can take more damage as the difficulty gets harder, no new areas open up and you don’t get any additional objectives if you replay a mission on a different difficulty. This seemed a bit anti-climactic after beating the game on easy. In fact, we found that there is very little noticeable differences between playing the first level on Operative and Agent. The levels are rather challenging once you play them in the hardest difficulty, but again, the real difficulty seems to lie mostly in the levels themselves. Evil Summit, for instance, was definitely challenging on both the Operative and 00 Agent difficulties. Trouble in Paradise on any setting wasn’t exactly that difficult. One big difference in the 00 Agent is the disabling of auto-aim. Really, though, playing the different levels in the Operative difficulty is mostly just for getting used to the levels. On Agent, you should be making use of the aiming system so you can get your headshots to conserve ammo. 00 Agent simply tests you on your ability to use the aiming feature. So, disabling the auto aim isn’t a huge thing by the time you’ve played all the levels on both Operative and Agent.

Another big difference is how levels are unlocked. If you beat one level, you unlock the next level. You can play that level at any difficulty you like. This is in contrast to Goldeneye where if you beat a level, all you get is the next level on that difficulty. You can only unlock all the difficulties in the next level if you are beating every level on the hardest difficulty. So, it’s possible to just play all the levels on Operative, then challenge Evil Summit on 00 Agent after to beat the game. This design decision, in my view, shortens the life of the game since you can skip levels you can’t beat on a particular difficulty so long as you beat it on any difficulty.

A huge pitfall of this game is the designs of the levels. Unlike Goldeneye where there are huge expansive areas and whole facilities to explore, this game suffers from a very linear play. All you get half the time are the standard corridor, room, corridor, room, finish style levels. As a result, there’s very little room for exploration save for an optional room just off to the side every so often. It isn’t until you reach the last few levels where level designs actually start to be decent in design. Even then, it isn’t exactly amazing either. Because of the simplistic level design, it isn’t hard to spend an afternoon beating this rather short game. There is, after all, only 12 levels to be had here.

A returning feature in this game are the use of gadgets. In all, though, you’ll probably only find yourself using a particular gadget in maybe 3 or 4 levels. Device use in this game isn’t as poorly implemented as what was found in The World Is Not Enough, but I think it could have been better implemented. The idea of so many of them revolving around a cell phone was a bit weird. I would think that some of the gadgets could have been built into a, say, a wrist watch or belt since many devices found in the movies were less multi-functional.

There was certainly an effort to change things up with the driving and rail shooter levels. These areas weren’t that bad, but the unfortunate part is the fact that it seemed more effort was made to make these sort of secondary levels impressive than the main first person shooter levels. The fact that rail shooting levels outshone some of the first person shooter levels is a bit saddening. Still, the effort to change things up is certainly something to give a thumbs up to.

A good reoccurring element that returns in this game is a nice small arsenal of weapons. While there is certainly a lot of overlap between weapons, I didn’t find too much to complain about in this game. Not amazing, but it was a pretty decent effort.

Unless there is something I missed between The World is Not Enough and this game, a new feature is the points system. Previously, the game simply counted your time as a measure of how successful you were in beating a level. Now, time is simply one element as the game tallies things like how much damage you took, your ammo efficiency, difficulty, and “Bond moves”. This all goes into a total score upon completion of a level. If you surpass various thresholds of points, you’ll be awarded a medal. If you do particularly badly, you won’t even receive a medal at all. The awards go up from bronze, silver, gold, and platinum medals. If you get gold or platinum, you’ll unlock small features such as golden guns or even golden grenades (???). These small features can either expand the multiplayer experience or help you in small ways in the single player missions. I thought this award system change was interesting.

The Bond moves, one of the ways you can score points, are particular things you can do in a level. If you successfully pull of a “Bond move”, you’ll get an audio cue and a 007 symbol appearing on the corner of your screen. For maximum points, you need to make ever Bond move. Some Bond moves are as simple as breaking through a lock. Other moves are using features on a level to your advantage (such as blowing up a particular object to take out a number of enemies all at once).

Another feature is the collection of items only available on certain difficulties. This is similar to what is found in Star Wars: Shadows of the Empire on the N64. In this case, it’s an all or nothing effort. If you collect all of the items, you get a nice sizable bonus in points. However, missing one means you get nothing.

Generally, it is good to see a game try to find ways of bringing more concepts into a first person shooter. Unfortunately, in this case, it seems to lose focus on the first person shooter elements. The level design and shortness of this game really hurts the overall gameplay in this. The ease of accessing different difficulties does help in the shortness of this game. In the end, you end up with, at best, a very mediocre game on this front. Once you’ve played through it, there’s not a whole lot of motivation for me to go back and play it again as well. A disappointment considering where this game franchise was when it first entered the N64 platform.

Graphically, this game was pretty decent. The effects only somewhat rival what is found in big games previously made such as Perfect Dark and Diddy Kong Racing, but what does help set this game apart is that models are capable of showing small bits of free movement such as talking and raising an eyebrow. So, a pretty good job done here.

The audio was pretty good. The voice work and special effects were pretty decent. The music does go back and forth depending on what is happening in the level. For instance, if you are simply sneaking around unnoticed, then you get the general level music. If you catch the attention of enemies, however, you are treated with a different kind of music. This was an interesting concept as the change of music is no longer tied to if an alarm is sounding or you need to accomplish something in a particular amount of time. If it weren’t for the large selection of action music, I would’ve said that the music was rather repetitive thanks to it being almost exclusively about orchestral music. So, the audio does end up being pretty good all around.

Overall, I was hoping to find myself playing an excellent game to get this game franchise back on the right track after the stumble with The World Is Not Enough. Ultimately, this ended up being a rather average game. This is thanks largely due to the fact that the first person shooter levels were, at times, extremely simplistic in design. The game also ended up being rather short as you could go from beginning to end over the course of an afternoon. The added elements of the points system, Bond moves, rail shooter levels, and driving levels does spice things up a little in this game. Unfortunately, it wasn’t enough to save it from mediocrity. The graphics were pretty good and the audio was also fairly decent, but this game still remains one of those games where you play through, challenge a few of the harder difficulty levels, and later forget.