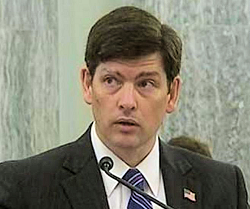 Nathan Simington has been confirmed as the next voting member of the FCC. It’s an effort to deadlock the regulator before Trump is out.

Throughout the Trump presidency, many note how many regulators have been hamstrung or otherwise damaged for the simple reason to serve Trump. The Federal Communications Commission (FCC) has been one such regulator. After Trump lost the popular vote, but became the president based on technicalities built in by Republican’s, the FCC effectively turned into the agency that would start wrecking the Internet among other things.

In 2017, the FCC killed network neutrality. Network neutrality is, of course, the idea that ISPs cannot favor or slow down/censor different kinds of traffic. It’s a critical pillar to retaining a free and open Internet. With this effectively killed, ISPs are free to introduce fast lanes and censor whatever they like. This ultimately means that they can pick winners and losers in the Internet market. So, the damage caused by the FCC killing this is stunning in and of itself.

As we would later find out, the FCC wasn’t done damaging the Internet.

A few months back, the FCC, at the behest of Trump, decided to try and gut Section 230. This is, of course, another key pillar to protecting the free and open Internet. Section 230 is the law that says that when a user posts something illegal online, the website isn’t automatically liable for the users action. Because of this law, the Internet has some very strong free speech protections in place. It allowed major platforms and websites to thrive.

Thanks to the Republican’s controlling the FCC, the FCC has become very hostile towards Internet freedom.

Now, it seems that Trump and his Republican enablers are trying to maintain this hostility towards freedom. The move is to replace Republican commissioner, Michael O’Rielly. The effort will keep the votes at 2 apiece. Trump, of course, lost the vote a second time. This time, however, technicalities are not enough to save him. As a result, time is running out to replace O’reilly.

So, Republican’s responded to the situation by ramming through the next FCC nominee, Nathan Simington. Objections have already been raised before by digital rights advocates an Internet observers. The Electronic Frontier Foundation (EFF), pointed out that Siminton is a threat to civil liberties. He is one of the key architects for the current effort to gut Section 230. So, the reasoning is pretty sound already.

Despite the objections, though, Simington has now been confirmed in a rushed process. From Variety:

The Senate voted along party lines to confirm the appointment of President Trump’s nominee to the FCC, Nathan Simington — who was opposed by Democrats. Simington’s confirmation, critics said, could stall the incoming Biden administration’s agenda, including the move to reinstate net neutrality rules.

Trump nominated Simington, who was previously a senior adviser at the National Telecommunications and Information Administration, to replace Republican commissioner Michael O’Rielly, who is exiting the FCC at the end of 2020. That’s because Trump declined to nominate O’Rielly for another term after the commissioner expressed doubt about the legality of the president’s order directing the FCC to explore how to interpret Section 230 of the Communications Decency Act to regulate social-media companies. That provision of the law currently provides a legal-liability shield for internet platforms that lets them moderate user-posted content.

Simington, whom critics point out has very little experience in the field of communications policy, was picked by Trump after Simington drafted the White House’s executive order on Section 230 to bar social-media companies from “engage in censoring or any political conduct.” The legality of such an action is disputed, but Trump and his allies are hoping to give the agency regulatory power over Facebook, Twitter and other internet companies.

The good news in all of this – if there is any at all – is that this keeps the vote to 2 and 2. Pai says he is leaving once Joe Biden is sworn in. So, it is possible that Biden can find someone to try and undo all the damage done in the last four years. Already, there have been reports about how a number of candidates Biden is eyeing could help restore network neutrality. Section 230, however, is the law that both parties intend to reform despite the lack of problems with that law. So, Section 230 will still remain a concern even after all of this.