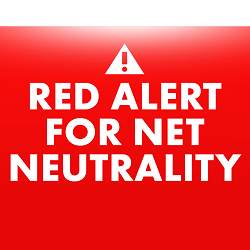 The Red Alert for Net Neutrality day of action is taking place tomorrow. Some of your favourite websites could be participating.

If you decide to browse some of your favourite websites tomorrow, you might get a home page that is much different then what you are expecting. That is because there is a Red Alert for Net Neutrality day of action taking place.

The day of action is being organized by Fight for the Future, Demand Progress, and Free Press Action via the Battle for the Net website. The day of action is being sparked by a critical US vote that would overturn the Federal Communications Commissions (FCC) decision last December to scrap network neutrality, an order that was published in the federal register in February.

Of course, the fight is far from over. Since the decision to repeal network neutrality, many states have thumbed their nose at the FCC and enacted their own network neutrality laws. Additionally, the order is being fought in the ninth circuit court.

On top of everything else, it is being fought in government. Back in January, a number of senators moved to get the ball rolling to overturn the FCC decision. That vote takes place tomorrow.

While some observers do think of this senate vote as a long shot to get the FCC decision overturned, it’s hard to argue that it is better to do nothing.

Without network neutrality, ISPs will be free to discriminate against different forms of traffic. This can include traffic shaping, outright blocking, or prioritizing some services over another. Many experts point out that should activity like this be permitted to take place, ISPs would be free to pick winners and losers in the Internet realm instead of letting the free market decide. Others argue that repealing network neutrality could have devastating consequences for free speech. It could, for instance, allow ISPs to slow down traffic to Netflix while keeping the traffic flowing freely for their own competing service.

At this point, network neutrality is certainly on the ropes, but not down and out yet. There are many battles to be fought at this point in time including the aforementioned state legislation and lawsuit.

Regardless of the outcome of the vote, the fight will be far from over. It is certainly just another step in the battle to save the Internet.