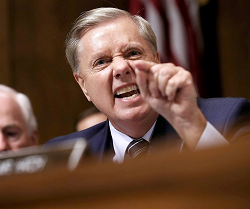 US Senator, Lindsey Graham, says he won’t support the military unless it involves adding Section 230 repeal to the NDAA.

Last week, outgoing US president, Donald “I Made Your Benefits Expire” Trump vetoed the NDAA. In doing so, Trump has defunded the military. The reason for the veto is because he threw a temper tantrum at Twitter over some fact-checking and wanted to eliminate Section 230. After pulling every lever he could, he made a last ditch effort by demanding that the Section 230 repeal be part of the NDAA. If it wasn’t going to be part of it, he said he’d veto it. Since the Section 230 repeal wasn’t part of the NDAA, Trump vetoed it, calling it a “gift” to China without offering any specifics.

As a result of the veto, the NDAA now goes back to Congress. In order to pass the NDAA, Congress needs to successfully get a super-majority of votes to override the veto. This means that Republican’s are going to have to choose: do they support the troops or do they support Donald Trump?

Today, for one Republican, the answer is to drop support for the military and support Trump. Senator Lindsey Graham said that we will vote against a veto override if the NDAA doesn’t contain Section 230 “reform”. From The Cheyenne Post:

South Carolina U.S. Sen. Lindsey Graham said he will not cast a veto-override vote in favor of an appropriations bill to fund military operations unless the act is amended to include a reform of Section 230 of the Communications Decency Act.

Trump vetoed the National Defense Authorization Act on Wednesday morning, citing several objections to the act, including that it lacked Section 230 reform.

“House’s refusal to wind down Section 230 for Big Tech shows they care more about Big Tech than working Americans,” Graham said in a tweet.

“Congress should vote to Repeal Section 230 as requested by President [Trump],” Graham added. “I will not vote to override presidential veto unless effort is made to wind down Section 230.”

Obviously, Section 230 is not solely about “Big Tech” and is actually about the Internet as a whole. Of course, facts and reality seem to matter little to some Republican’s these days, so that doesn’t really matter for him.

The real question here is whether Graham is one of only a few Republican’s doing everything they can to support Trump or if he will spark a wave of anti-military sentiment amongst Republican’s. We know where one person is going to vote now at least, so time will tell if others are going to join in on the effort to defund America’s military.