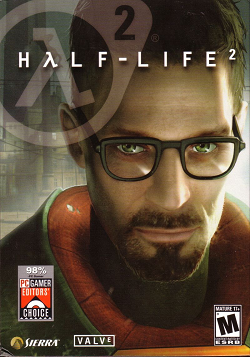 In this first First Impression video, we play Half-Life 2 for the very first time. This game was released on Steam in 2004, so we thought we’d give it a try.

Welcome to the very first First Impression video from Freezenet. Today, we are playing the Steam/PC game Half-Life 2 for the very first time. The video contains 10 minutes of actual gameplay footage. You can check it out directly on YouTube or directly below:

Earlier today, we announced this feature. Now, we are following through on this with our first video.

We should point out that we did have some technical difficulties when recording this video. After doing some extensive testing with the recording software, we totally thought that all systems were go given that all recording worked perfectly. When we played Half-Life 2 to get the raw first play through, the video ended up recording black. We had no idea until after the recording session because the game was full screen.

When we reviewed the footage after, we knew full well we can’t post that. A black screen would be terrible. So, we were left with a rather difficult choice: scrap the idea of making a first impression video entirely for this video game or replay the first part again even though it’s not technically our very first impression of the game. We decided on an interesting third option: re-create the video with all the actions and observations we made. It’s by no means ideal, but it’s the best option we figured we had.

On the second playthrough, we chose to point the camera at the screen to try and capture the best video quality possible. We thought we nailed it to a reasonable degree, so we recorded that. When we reviewed the footage, the camera wound up auto-focusing randomly and blurred at different points in the video. In addition to this, the horizontal was backwards (so, text on screen wound up being mirrored). We were prepared to plug our nose and post that, but then had a thought: try playing the game not in full screen mode. Our testing contained material in windows not in full screen.

When we recorded it a third time using this method, the video recorded just fine. The only caveat is that there is a thin bar along the top. Considering the other two options we have, this wound up being a no-brainer and chose the third video we captured. So, if you are wondering why I did not get the Submissive and Malcontent achievements in the video, that is exactly why.

We hope you enjoy this video and look forward to making more in the future now that technical issues have seemingly been sorted.