The government of Australia has released its latest survey about Internet censorship. They found that consumers are not exactly buying as much now.

It is a long established global consensus. Internet censorship to boost entertainment sales is never going to work. Whether it is through independent studies or expert opinion on the subject, most agree that censorship only really suppresses online free speech.

That of course is not stopping the music and movie industry from pushing ahead with lobbying governments around the world to implement Internet censorship. Following the failure of mass file-sharing litigation, high profile takedowns in the scene, dismantling networks, the seizures of websites, DRM, and three strikes laws, the industry continues to grasp at straws and now feels Internet censorship is the silver bullet that will solve all of their alleged problems.

In Australia, the industry got what they wanted and the country moved ahead with Internet censorship in 2014. In less than a year, the effort to censor the Internet was being abused. It resulted in lawsuits, one of which revolved around a construction company censoring a competitor. Internet advocates long warned about such abuse, but their calls were ignored and their predictions ultimately came to fruition.

Despite the massive amounts of abuse, the entertainment industry continues to push ahead for more and more censorship. Earlier this week, the industry went as far as attempting to censor fansub websites. So, they feel the destruction of free speech isn’t that big of a deal. They are even pushing for more of it.

So, the question is, what are the net results? If one were to look at studies and expert opinion, the prediction would be that it won’t solve anything and people won’t be magically rushing to the store to buy music and movies just because their website of choice is now blocked. A new survey pretty much confirms this. ITNews is reporting that people are paying less for entertainment and that people are downloading unauthorized content more than ever before:

“The average consumer quarterly spend among those that are 100 percent lawful has declined across all four content types,” the researchers said.

“This is a trend across the last three years for video games and movies and the last two years for music and TV programs.”

The report provides conflicting perspectives on whether that slide can be stopped.

The research also found the proportion of hardcore pirates is slightly up year-on-year. The researchers said there was an “increase in participants selecting ‘nothing would make me stop’ [infringing] – from four percent in 2015, 2016 and 2017 up to six percent in 2018.”

We took a spin through the survey (PDF) and found it to be an interesting read ourselves. For what we were able to see, the charts themselves spoke volumes: 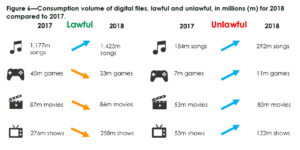 This figure alone is pretty much the exact opposite of what many lobbyists say would happen. The theory amongst the lobbyists is that if people are being blocked from accessing illegal content, they would flock to the stores and buy content legally. Piracy would drop and sales would skyrocket. The reality wound up being precisely the opposite. Piracy rose and sale largely fell. This is compounded by other charts throughout the survey:

Of course, as all things in life, things are not perfectly linear. There are circumstances where sales are up. Researchers did look into this further where spending habits rose and made a rather interesting conclusion:

In other words, where there were areas of growth, it was largely thanks to services that show efforts to adapt a business model and offer content in a more convenient manner. These findings are largely consistent with previous research which showed that the consumption of illegal content has little to no negative impact on the consumption of legally available content. The increase in legally available content will allow consumers to move from illegal sources to legal sources.

So, after all of this, it seems that Australia is finding that Internet censorship is proving to be an abysmal failure. If the stated goals of implementing censorship is to stem piracy and increase sales, the above findings prove that the opposite results wound up happening. Piracy is up and the consumption of legal content fell. Our previous coverage of the situation in the country also found that censorship also harms free speech. Every prediction from digital rights advocates have ultimately come true.

Now, whether or not the introduction of reality will start a discussion on whether or not the country needs to reverse their decision of implementing Internet censorship remains to be seen. The industry has already dropped a lot of money on lobbying for this demonstratively failed policy, so chances are, they won’t be backing down regardless of how much reality pushes back. The question will probably come down to how long will policy makers continue to allow this to go on before they finally admit that censorship to curb piracy is a mistake and being taking steps to dismantle the censorship laws. In the mean time, Australian citizens will continue to suffer from the consequences of this censorship policy.