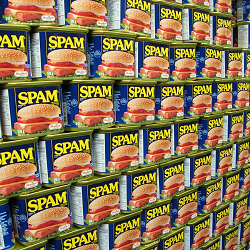 The Canadian Federal Court of Appeal has ruled that Canada’s anti-spam law is constitutional. Observers say this puts to rest some of the criticisms.

Canada’s anti-spam law is constitutional. That is according to the Canadian Federal Court of Appeal. While the case could still be appealed and head to the Supreme Court, the Appeals court unanimously upheld the law.

I’ve been able to cover this legislation from time to time. For example, in 2009, the bill ended up being delayed due to an election being called. As a result, the bill wound up dying on the order paper. Still, lawmakers vowed to re-table the legislation in the next sitting. Not only did they do this, but they ultimately passed the bill in the years since.

There’s been a number of criticisms levied against the legislation. One argument is that e-mailing people about a lemonade stand would somehow be illegal. Of course, one of the more interesting side effects is the fact that it actually hindered the surveillance of Canadian ISPs. This cropped up back in 2013. At the time, the then draft regulations conflicted with ISPs secret surveillance of Canadian Internet users suspected in being involved in child pornography.

Fast forward to today and the legal standing of the law is now much more solid. From Michael Geist:

The case could still be appealed to the Supreme Court of Canada, but the decision signals that Canada’s anti-spam law (now typically referred to as CASL) will remain the law of the land for the foreseeable future. The lobbying campaign at the Industry Committee in 2017 to overhaul the law was rejected, resulting only in recommendations to clarify certain provisions. The government response to the committee report months later was even more tepid, merely noting the committee’s concerns. Now the efforts to challenge the constitutionality at both the CRTC and in the federal courts have failed with the Federal Court of Appeal firmly dismissing claims that have repeatedly raised by the law’s critics.

I have written extensively about CASL, defending it when it took effect in 2014 (here and here) and making the case for the law in 2017 before the Industry Committee. My committee appearance focused on three issues: there is a real harm or risk to be addressed, the evidence suggests that the law has been effective, and that the claims that the law is too onerous or overbroad are overstated. The Federal Court of Appeal addressed all of those issues in its decision.

The ruling includes an extensive review of the CRTC spam investigation into a Montreal firm named CompuFinder that triggered the case, but the heart of the case is whether the law is unconstitutional. The argument touches on numerous issues, including whether the law falls within federal jurisdiction, violates the freedom of expression protections found in the Canadian Charter of Rights and Freedoms, or runs afoul of several other Charter provisions related to self-incrimination or the right against unreasonable search and seizure. There is also additional analysis of the specific CRTC investigation and application of the law to CompuFinder, which will be the subject of a follow-up post as it provides guidance on the interpretation of CASL.

In a follow-up, Geist also posted some further analysis of the court ruling:

The court also considered the issue of conspicuous publication under the implied consent exception. CASL says that consent can be implied if the person to whom the message is sent has posted their address, not conspicuously published a statement that they do not wish to receive unsolicited commercial email, and the message is relevant to the business or role of the recipient. In this case, CompuFinder argued that it had the necessary implied consent. The CRTC rejected the argument, noting that some emails were taken from third party sites and that relying on job descriptions alone were insufficient to prove relevance. The court agreed:

organizations seeking to rely on paragraph 10(9)(b) of CASL would do well to be prepared to state explicitly the ‘business, role, functions or duties’ of recipient individuals or organizations – I do not believe the terms in quotations require further definition – at least insofar as it relates to the subject matter of the CEM in question. The organization should then be prepared to elucidate, equally explicitly, the relevance of the CEM to the recipient’s business, role, functions or duties thus stated. The express terms of paragraph 10(9)(b) of CASL, in my view, require no less.

Finally, on the issue of a valid unsubscribe mechanism, CompuFinder’s emails often included two unsubscribe links – one working and one not. The CRTC ruled that this did not meet the necessary standard in CASL and the court agreed:

prior to selecting the functioning link, recipients are confronted with two alternatives with no clear indication as to which is the correct one to select. This, in itself, can cause delay and compromise the ease with which the mechanism is supposed to be accessible. These issues are compounded if the wrong mechanism is selected on the first attempt and recipients encounter an error message. It is not necessary to speculate whether this could create confusion and frustration among recipients – written statements from consumers seen by the CRTC confirm that it can, and has.

The case stands as the most important CASL case to date, providing both guidance on interpreting some of the provisions found in the law and strongly affirming that the law is constitutional.

One perspective someone might have is that this law likely won’t do anything to help the fight against spam as a whole. I would argue that this would actually be helpful on the part of Canada. If someone is trying to push spam in Canada, authorities now have a new mechanism to throw the book at them. Yes, this law would not apply to people outside of the country, but for Canada’s part, this country has their ducks in a row in at least trying to take down such operations. It’s far better than Canada doing nothing if you ask me.

What will be interesting to see is how this law is enforced and whether or not, in practice this actually plays a role in fighting spam in the first place. After all, we’ve seen situations where a law is put in place and authorities simply don’t use it when investigating suspects over alleged crimes.

An example of this is Canada’s anti-camcording law. In the 2000’s, the Motion Picture Association demanded that Canada implement a completely unnecessary anti-camcording law to thwart movie piracy. The law as pushed at the time is unnecessary because, for one, authorities were already going after theatre pirates, and, for another, authorities already use Canada’s Copyright Act to go after them. These legal realities didn’t matter to the international multinational corporate organizations who seem to have their own view on the state of Canada’s copyright laws. They lined up everyone they could to call on Canada to put anti-camcording legislation into law anyway, criminalizing an activity that is already illegal.

Lawmakers begrudgingly passed the laws which really was a waste of everyone’s time. After that, several more theatre pirates were busted in Canada and authorities simply relied on Canada’s Copyright Act to throw the book at them, thus proving once and for all what a waste of time that whole exercise was.

There was, however, a silver lining in all of that, though. Years later, the then questionably credible Special 301 report came out and placed Canada on a piracy watchlist in 2018. The credibility of the report was slammed by many because, in spite of the evidence, Canada passed anti-cam laws to make the already illegal activity of camming illegal. To this day, there is little evidence that Canada is the epicentre of theatre piracy. Yet, Canada did what the country was asked and that ended up changing nothing in the eyes of the Special 301 report. As a result, the Special 301 report wound up having zero credibility in the world of copyright lawmaking.

So, it’ll be quite interesting to see what comes from the anti-spam law. As the anti-camcording law shows, you never know for sure what effects a law will have down the road. In this case, the hope is that enforcement will occur in Canada to thwart spammers efforts. If this law is successful, maybe it can be a model for countries who haven’t yet passed laws to target spammers. Wouldn’t that be a positive spin-off of this law?