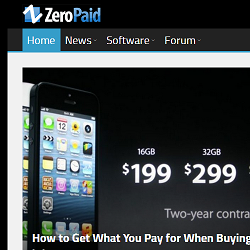 Things were growing seemingly pretty bleak for the website, but after 37 days of partial or complete downtime, the website is now back.

Over a month ago, we noted that filesharing news website ZeroPaid went down. The site, save for the home page, delivered database errors. Concerned, we contacted the staff of the site to see what was going on.

Since then, we’ve been monitoring the situation to see if the site is coming back online. As the days, then weeks, went by, worry grew as to whether or not it was actually the end of the site. Such worry isn’t unreasonable. Generally speaking, the longer a website is down, the less likely it is to come back online.

Yesterday, things started looking bleak for the site as the only page that was left online went offline. This left the website with only a Cloudflare cached version of the home page and the domain itself.

Still, administration seem to be upbeat these days, even joking about the ordeal. Jorge wrote on Twitter, “Did we forget to pay the server bill again?”. He also took a friendly jab at us, saying, “Sorry to disappoint you but the site is back online. :)”

For the record, we are not disappointed that the site is back online. The filesharing news scene would be a lot quieter without the site.

So, while there was quite the scare for a while, it seems that the site is, at the very least, more or less functional again.