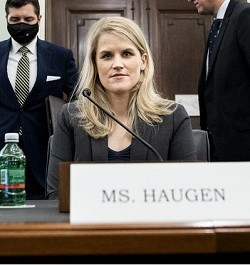 Frances Haugen blew the whistle on Facebook. While her testimony made headline news, will anything really change?

Another story making headlines is Frances Haugen, the woman who blew the whistle on Facebook. She testified before congress and gave her side on how things work in Facebook. Among the comments were how Facebook is seeking growth at all costs. If there is heat, then Facebook might take action for the health of its users, but otherwise, it’s whatever drives “engagement” whether it is good or bad content.

Indeed, after the Congressional testimony, the Electronic Frontier Foundation posted their response to what they witness. In their comments, the organization notes that what they are witnessing is a sign that breaking up the company might be in everyone’s interest:

Through her leaks and Congressional testimony, Frances Haugen, the “Facebook Whistleblower,” revealed a lot about Facebook’s operation. Many of these revelations are things we’ve long suspected but now have proof of: Facebook focuses on growth—of users and time spent on its platforms—to the exclusion of everything else. For Facebook, growth trumps all, even the health and safety of its most vulnerable users.

In her testimony, Haugen explained that at Facebook, metrics are king. Facebook’s “growth division” works to increase “user engagement,” and it succeeds. This is a circular process: Facebook identifies content that users “engage” with and promotes it, leading to more engagement. Facebook’s automated systems don’t evaluate what is being engaged with – they just identify and rank materials by engagement itself. So, according to Haugen, the automated scoring system will rank successful bullying as “engaging” alongside anything else that garners a lot of attention. Politicians who make extreme statements get more engagement, and are therefore ranked higher by Facebook, and are therefore seen by more Facebook users.

Ms. Haugen told Congress that she thinks Facebook should be reformed, not broken up. But Facebook’s broken system is fueled by a growth-at-any-cost model. The number of Facebook users and the increasing depth of the data it gathers about them is its biggest selling point. In other words, Facebook’s badness is inextricably tied to its bigness.

EFF’s position is that if when a company’s badness is inseparable from its bigness, it’s time to consider breaking that company up.

Some in the media are now questioning whether or not Haugen’s actions could lead to legal repercussions. From the CBC:

Facebook has recently taken a harsher tone toward whistleblower Frances Haugen, suggesting that the social network giant could be considering legal retaliation after Haugen went public with internal research that she copied before leaving her job earlier this year.

U.S. law protects whistleblowers who disclose information about potential misconduct to the government. But that protection doesn’t necessarily cover taking corporate secrets to the media.

Facebook still has to walk a fine line. The company has to weigh whether suing Haugen, which could dissuade other employees who might otherwise speak out, is worth casting itself as a legal Godzilla willing to stomp on a woman who says she’s just doing the right thing.

Reports suggest that her testimony before Congress is far from the only one. A BBC report says that she will also testify before lawmakers in the UK as well:

Ms Haugen will appear before the Online Safety Bill committee on 25 October.

It is examining a law to impose obligations on social-media companies to protect users, especially children.

Facebook firmly denies any such allegations, with boss Mark Zuckerberg labelling them “illogical”.

What’s more is that Haugen will also appear before Facebook’s Oversight Board. From The Verge:

Facebook whistleblower Frances Haugen said Monday that she will speak to the platform’s independent Oversight Board at its invitation.

“I have accepted the invitation to brief the Facebook Oversight Board about what I learned while working there,” Haugen tweeted. “Facebook has lied to the board repeatedly, and I am looking forward to sharing the truth with them.”

Haugen, a former product manager in Facebook’s civic integrity group, leaked a large cache of internal Facebook documents to the Wall Street Journal showing problems within the organization. She appeared on 60 Minutes two days before she testified before Congress that Facebook “repeatedly” misled the public about “what its own research reveals about the safety of children and the efficacy of its artificial intelligence systems as a role in spreading divisive and extreme messages.”

In a statement posted to its website Monday, the Oversight Board said in recent weeks “new information about Facebook’s approach to content moderation has come to light” as a result of Haugen’s actions. The board seeks to “discuss Ms. Haugen’s experiences and gather information that can help push for greater transparency and accountability from Facebook through our case decisions and recommendations.”

Some outlets are striking a more optimistic tone in that this testimony is different and this will finally lead to much needed change within the company. From NPR:

Revelations brought to light from whistleblower Frances Haugen, a former data scientist at Facebook, has led to what may be the most threatening scandal in the company’s history.

The pressure was turned up on Tuesday, when Haugen testified before a Senate subcommittee. She provided a clear and detailed glimpse inside the notoriously secretive tech giant. She said Facebook harms children, sows division and undermines democracy in pursuit of breakneck growth and “astronomical profits.”

The thing is, so much about the testimony is unsurprising. Only act when the heat proves to be too much, growth at all costs no matter what. Additionally, Facebook has been in hot water so many times, it’s difficult to even count the many ways it’s been in hot water. In April, internal e-mails showed that the company is utilizing the strategy of ignoring the major data breach and hoping it all goes away. At the time, the big story was that 533 million accounts were compromised in a massive data breach. To add spice to the story, there were the reports that Facebook failed to notify EU regulators about the breach and the fact that Digital Rights Ireland was preparing a lawsuit against Facebook in response.

Then there was the Cambridge Analytica scandal that saw people testify in both the UK and the US governments. That ultimately led to a lawsuit in Australia, a $1.6 million fine in Brazil, and a $5 billion fine in the US from the FTC. That ultimately didn’t really seem to deter Facebook given what happened on January 6th.

The thing is, one can’t help but look at the scandal after scandal after scandal Facebook is getting hit by. Every time a new one crops up, there’s no shortage of voices who say, “this time, Facebook is really in for it”. Yet, here we are, once again, with a company that is more focused on being a larger company above all else. Sure, there is the FTC taking another kick at the can in suing Facebook for anti-trust violations, but at what point do you start to question whether a particular scandal is going to lead to real meaningful reform within the company? We’ve been down this road so many times and so many times did the scandal seem like the tipping point for Facebook.

Everyone knows that Facebook is not exactly a shining beacon of hope. Some consider it one of the major cesspools of the Internet. At the end of the day, it always seems to be more of a case where Facebook gets hit with controversy, the absolute minimum is done to allay the possibility of regulatory or legal action, and things to back to status quo. If losing the personal information of almost every user on the site several times over, being the subject of foreign interference, and being used as a tool to cause harm in the democratic process (and the damage that was done in the process) isn’t enough to greatly reform what is going on in Facebook, I struggle to think what is. As immediate as this story of the whisteblower is, I struggle to get excited that this is what finally generates much needed reform within the company. It’s nice to think that Facebook will finally change for the better, but I can’t help but be skeptical that this is finally going to do it.