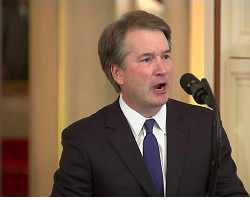 Trump’s new supreme court nominee, Brett Kavanaugh, is having his history combed over. It turns out, he’s a net neutrality opponent.

On the heals of word that California will go ahead with protecting network neutrality after all, it seems American politics is seeping into the network neutrality debate. Brett Kavanaugh was recently announced as the Trump administration’s new supreme court nominee. Naturally, his history is being combed over. What is being discovered now is that he has a long history of being an opponent of network neutrality.

According to Motherboard, the justice suggested back in 2016 that the laws (which are a pillar to online free speech) are unconstitutional and violate the first amendment:

In 2016, that court ruled to uphold net neutrality protections. But because not all of the judges were present when that ruling was made, the major ISPs behind the petition pushed for another hearing later that year. In the court’s decision on that request—they voted no, they wouldn’t reconsider the petition—Kavanaugh filed a dissent, arguing that the net neutrality rules were unconstitutional and comparing it to the rights of cable companies to not be forced to air certain programming under the First Amendment.

A year later, the justice said that ISPs are basically cable companies and should have the power to block access to any website they wish:

“Just like cable operators, Internet service providers deliver content to consumers,” Kavanaugh wrote in a 2017 dissent on an appeal to have the court reconsider federal net neutrality protections. “Internet service providers may not necessarily generate much content of their own, but they may decide what content they will transmit, just as cable operators decide what content they will transmit.”

While the nomination is not yet confirmed at this stage, this development is renewing fears that network neutrality, or at least what’s left of it, is potentially facing a greater uphill battle then once thought should there be an effort to restore it. If the battle in California goes all the way up to the Supreme Court, then with Conservatives holding the power, free speech may not stand a chance. The most that can be accomplished is having lawsuits that delay the quashing of Internet free speech protections in the US.

As with the way American politics works, a lot can happen between the nomination and the final confirmation. Delays can happen, mid term elections could play a roll in this, something can happen with some obscure procedural law. Who knows?

At any rate, this story certainly shows that the drama happening in US politics is certainly spreading into the tech community whether they wanted it to or not.