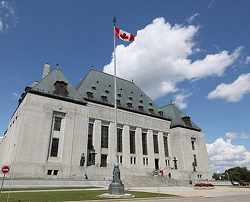 A recent Supreme Court of Canada ruling could have major implications for any potential file-sharing cases in the future.

It’s been one of the most talked about aspects of file-sharing lawsuits over the last decade. Is an IP address enough to conclusively say someone is guilty of infringement?

Almost everyone in technology circles would say the answer is no. There are plenty of situations where an IP address cannot be tied to an individual. When mass file-sharing lawsuits were a thing in the US years ago, one example typically crops up: multiple people in a household. It is, and still is, a common situation. A son or daughter goes online and downloads a whole bunch of infringing material. That person, in turn, uploads the entire collection to others, knowing that some networks favour those that upload lots of material. At the same time, that person doesn’t really have a good grasp of any of the consequences.

In the unlikely event that this person is caught, the IP address merely points to the parents because it’s their information that is on the bill. That parent not only has no clue about public file-sharing networks, but also has no clue why they are being targeted for material they never even heard of. While this opens a whole can of worms most of the time, the wrong person is clearly being targeted by legal threats.

Another example that is often brought up is war driving and Wifi password cracking. This sort of thing can be common in apartment complexes where you have a large number of people packed into a smaller space. One person in the building knows that they could get in trouble for uploading certain kinds of material on an open file-sharing network. In an effort to cover their tracks, they decide to crack someone else’s Wifi password. Password in hand, they assume another persons identity and do whatever they feel like with that connection. If repercussions take place, it’ll be directed at some other random individual.

Over the years, countless examples have cropped up showing that an IP address is not a very strong piece of evidence. In fact, we’ve seen studies where a University showed that a printer could be implicated in an act of copyright infringement even though a printer cannot even access a file-sharing network.

Unfortunately, major corporate rights holders hold on to this flawed theory that an IP address is a digital fingerprint and can be easily traced to a guilty party. This isn’t technologically accurate, but it is a critical piece of the puzzle for litigation. Without an IP address being admissible in court, it would make file-sharing cases far more difficult to prosecute. In fact, automated lawsuits would practically cease to exist if an IP address is not indicative of guilt.

As such, that’s what makes a recent Supreme Court of Canada ruling a critical one. The Supreme Court ruled that an IP address does not automatically mean a party is guilty. The decision could potential deal a serious blow to efforts to bring mass litigation into Canada. Michael Geist quotes the Supreme Court majority statement:

It must be borne in mind that being associated with an IP address that is the subject of a notice under s. 41.26(1)(a) is not conclusive of guilt. As I have explained, the person to whom an IP address belonged at the time of an alleged infringement may not be the same person who has shared copyrighted content online. It is also possible that an error on the part of a copyright owner would result in the incorrect identification of an IP address as having been the source of online copyright infringement. Requiring an ISP to identify by name and physical address the person to whom the pertinent IP address belonged would, therefore, not only alter the balance which Parliament struck in legislating the notice and notice regime, but do so to the detriment of the privacy interests of persons, including innocent persons, receiving notice.

The statement seems to follow what was ruled clear back in 2004 and 2005 in the BMG Canada Inc v Doe case. Obviously, this goes back a very long way, so Wikipedia does have an entry on this which is rather enlightening:

(1) applicant must establish a prima facie case against the unknown alleged wrongdoer; (2) person from whom discovery is sought must be more than an innocent bystander; (3) that person must be only practical information source; (4) said person must be reasonably compensated for expenses of compliance with the discovery order; and (5) the public interests favouring disclosure must outweigh legitimate privacy concerns.[1]

He noted that there was no evidence that the files being downloaded were illegal.[2] He held that under the Copyright Act, downloading a song for personal use was not illegal.[3] CRIA had only been able show that the users made copies available on their shared drives. CRIA also failed to show that there was no alternative to gain the requested information.[4] Von Finckenstein concluded that the plaintiff was unable to show that the importance of the disclosure outweighed the importance of the right to privacy, and denied the request for discovery.

The judgment of the Federal Court of Appeal was delivered 19 May 2005, at Toronto, Ontario.

Justice Sexton, for the court, upheld the core finding of the previous case, that the identities should not be revealed to the plaintiffs. He found that merely placing files in a shared directory does not constitute the “authorization” needed to infringe on the distribution right.[5] He modified the test required in this kind of case and also said that, given the preliminary stage of the proceedings, the lower court should not have commented on whether the alleged file-sharing was actually copyright infringement.[6] However, Justice Sexton only held that exceptions to the private right of copying were not considered, not that downloading a song in and of itself was a violation.

It’s this court ruling that pretty much shut the door for mass litigation in Canada for years. While there have been efforts since then (i.e. the Voltage cases) to reverse this, the Supreme Court ruling pretty much shuts the door once again to mass litigation. Now, the legal landscape on file-sharing says that not only is an IP address not enough to override privacy laws so plaintiffs can get subscriber information, but also that an IP address is not sufficient in assuming guilt.

With all three levels at one point or another shutting down the possibility of a legal mass litigation campaign, that makes mass file-sharing litigation that much more difficult to execute. Ultimately, the only option left is to unleash an army of lobbyists and push the federal government to reverse at least three separate court rulings and change copyright laws again. Whether or not any future efforts succeed is up in the air, but there have been successive copyright reform bills dying on the order-paper over the last decade due to public backlash.

Another possibility that could theoretically be seen is that rights holders simply return to abusing the notice-and-notice system. Over the last couple of years, there have been numerous reports where notices contained language that said that the accused is being sued and that they have to pay a settlement fee in order to make the litigation go away. This is a legally questionable tactic, but doing something legally questionable hasn’t stopped major corporate interests before.

Geist also noted this and called on the government to amend the notice and notice system to prevent this very type of abuse:

While some may feel that they have little alternative but to settle, the Supreme Court’s language sends a reminder that IP address alone may be insufficient evidence to support a claim of copyright infringement. Those that fight back against overly aggressive notices may find the claims dropped. Alternatively, contesting a claim would require copyright owners to tender more evidence than just an allegation supported by an identifiable IP address.

Moreover, the finding reinforces the need for the government to act by stopping the inclusion of settlement demands within copyright notices. The system was never intended to be used to send legal claims and pressure recipients to settle unproven infringement allegations. Indeed, with the court recognizing the privacy interests at stake and that an IP address alone is not conclusive of guilt, the decision increases the pressure on government to address the inappropriate conduct by rights holders who are using the system to pressure thousands of Canadians into paying hundreds of dollars despite the obvious limitations associated with their claims.

Regardless, it’s very hard to spin this ruling as anything other then a setback to major corporate copyright interests. It’ll likely only add further motivation to push through tough new copyright rules through various trade agreements such as NAFTA and CETA (via the ISDS provisions). At the moment, the behaviour of, for instance, major record labels, suggests that trade agreements are still a soft target and a means to circumvent the democratic process. With today’s developments, it seems that they are beginning to run out of options at this point.