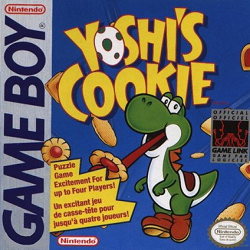 In this review, we play the game that makes dentists recoil in horror. We’re playing Yoshi’s Cookie on the Game Boy. We find out how well this puzzle game plays.

This game was released in 1993. It was also released on the NES and later on other systems.

This is one of many tile matching games released in the 90s. In this particular version, players need to create rows of the game tiles. These tiles are actually cookies. You use the cursor to select either a row or column. When you are on a row or column you want to adjust, you hold down “A” and move the row (left or right) or column (up or down). You keep doing this until you completely match a row or column. If a row or column matches, it will disappear.

Before you start a game, you have a number of options. These options are very similar to that of Dr. Mario. You can choose a speed (low, medium, or high), the music you want to hear in your game (A, B, C, or OFF) and you can even choose which round you want to start with. While selecting a higher round may help you complete the game faster, it’s harder to obtain higher scores because you’ll have fewer rounds to earn points. Do note that higher speeds don’t directly give you higher scores.

As you progress in this single player mode, you’ll notice more and more cookies appearing on screen. These add rows and columns to your playing field. If the cookies reach the top or right hand side of the field, it’s game over.

While the continual addition of rows and columns sound like an inherently bad thing, when you get close to completing the round, you’ll find yourself needing them. This is because it’s often the case that you may get 9 cookies left in a 3×3 grid and two of each kind of cookie (thus making it mathematically impossible to complete a line). In that case, you are waiting for another bunch of cookies. To make the process faster, you can hold down on “B” to make the cookies appear faster.

One last note on this mode is the special Yoshi cookie. This cookie acts as a wild card. You can line it up with any other cookie (provided the remaining cookies match) and it will count as a complete row. If you have a row of one cookies and a column of another type of cookie with this cookie in the intersection, both row and column will clear out. Also, a complete row and column of Yoshi cookies will also disappear.

Vs. mode is the other mode in this game. You can play against the computer or take on another human player. In this mode, things work a little differently.

In this mode, you get to work with a 5×5 grid. If you clear out a row or column, then that row or column is immediately replaced. It is possible to get a combo by clearing, say, a 5 cookie row, then having a 4 cookie column without moving anything, but it tends to be tricky to pull off (besides getting lucky).

Even though you can’t see cookies approach, this doesn’t mean you get unlimited time in this mode. Far from it. Instead of cookies, you get a timer. If you exceed the timer bar, you lose the match. How quickly the timer bar fills depends on the speed setting you set before the match.

In addition to this, there are two bars on the right side of the field. The one on the left represent your progress while the right one represents your opponents progress. If you clear a row or column, you fill your bar. If your opponent clears a row or column, then the opponents meter fills up a little. The first to fill their meter wins the “set”. First to three winning sets wins the game.

Of course, the game isn’t this simple in this mode. You’ll notice the Yoshi cookies appear in your field. For every row or column you clear, you generate an additional Yoshi cookie. Contrary to single player mode, Yoshi cookies do not serve as wild cards. Instead, you need to make a row or column of them to clear them out. What is special about them is the fact that they create an affect on the game.

The affects vary wildly. They can impact your play or they can impact your opponents play. This is where the words that appear above your field comes into play. Throughout the match, the words change. When you clear a row or column of Yoshi cookies, the affect on display will actually be triggered. This can help or hinder your progress, so paying attention to what the word is is critical to your success.

To the left of the word is either your name or your opponents name. This indicates who this will affect. The word that appears next to the name is what the effect is.

BLIND means question marks appear over top of the middle 9 cookies for a moment. You can still clear rows or columns under these question marks, but it makes things more difficult. PANIC briefly scrambles the playing field. SLAVE means your cursor affects your opponents as well. If you make a move on your field, then your opponents field will get moved. Essentially, it scrambles things somewhat for the player who is the slave. +1/+3/+7 means the player gets an additional 1/3/7 column points added to their meter. Obviously, -1/-3/-7 deducts that much from the players meter.

You’ll notice your character on the corner either standing there, holding an “X” or holding a circle. This can help you determine if the effect is positive or negative without looking at the word. This can actually save a split second as you line up your Yoshi cookies. How usable this is depends on the player, but this can prove to be useful.

Before the match, you can adjust both your opponent or your settings. The speed determines how fast the timer goes. The numbers, meanwhile, adds points to the meter before the match starts (thus making it a handicapped game). To adjust your setting, you just need to use the arrow buttons. To adjust the compute opponents settings, you need to hold down “B” before using the arrow buttons.

One thing I found annoying about this game is that, in single player mode, you are basically waiting for the game to decide whether or not you win. When you are sitting on two cookies left, you practically won the round. Unfortunately, with the way the game works, you have to wait for the game to deliver the right cookies that allow you to win the match. This can be a few seconds or it can last a majority of the round. How long it takes is seemingly up to the random cookie generator. These parts of the round can get boring. If there is a threshold where you have to work the cookies down to a 2×2 grid to win, this might have been alleviated for the most part.

Another thing about this game is that the game is actually not that hard. The only difficulty comes when the blurring comes into effect. Once the cookies start moving fast enough, you are reduced to squinting at the screen trying to determine what cookies are coming down. You can get a hint when they first appear on the field, but this isn’t always the case. The difficulty in this game becomes a hardware limitation.

The final complaint I have with this game is that the cutscenes can be hit and miss. Some of them are amusing (such as the giant cookie). Others are boring (the hill chase). I think this game tries too hard to be like Pac Man in that respect. The scenes could have been an all-encompassing storyline, but that’s not the case. In that case, the game is a little underwhelming.

Having said that, this game is very easy to figure out. Probably the hardest part to figure out is how Yoshi cookie effects in vs. mode. This is partly thanks to the fact that the opponent can lob a few effects at you. Still, a little trial and error is all it takes to figure out what is happening. So, this gets a thumbs up from me.

Another positive for this game is the amount of gameplay that is found here. A lot of Game Boy games I’ve played can be played over the course of an afternoon. This one took me more than a day to play through. This is certainly impressive. There are plenty of different settings you can try. These different settings means you do get a lot more gameplay out of this. Surprisingly, this doesn’t necessarily make the game repetitive. So, another element that gets a thumbs up from me.

Generally speaking, this isn’t the strongest puzzle game to be found on the Game Boy system. The end game gets annoying as you practically won, but rule limitations means you are at the mercy of a random generator. Another pitfall of this game is that as the speed goes up, the difficulty is not in the skill of lining up cookies, but fighting the screens refresh rate. The cutscenes are also pretty hit and miss. Having said that, there is a lot of gameplay to be found here that surprisingly doesn’t get repetitive. You can thank the different settings for this. It is also easy to figure out how to play. So, pretty decent overall.

The graphics are decent enough. I’ve seen better graphics from older games on this system, but it still isn’t bad. The cookie crumbling in the field really helps give the tiles that cookie look to them. Some of them even look tasty looking. The character animations on the side of the screen during single player mode are nicely done, but it’s hard to notice when you are concentrating on the field. Still, if fills space, so there is that. The blurring is probably the biggest problem with the graphics here.

The audio isn’t bad. The fact that it doesn’t get repetitive and annoying after 10 rounds is an achievement. Still, this game would have been better served if the music changed every two rounds rather than forcing players to decide on one song for the entire game. The sound effects are pretty solid.

Overall, this game delivers a flawed, but decent performance. While the end game of each round is annoying, the cutscenes wound up to be underwhelming, and the blurring hindered the games performance, there are positives to be had here as well. With the different settings to try out, this game delivers an unusual amount of quality gameplay that doesn’t get as repetitive as you’d think. Add to this the ease of learning on the fly, and the game is pretty solid. The graphics are decent, but nothing huge. While the audio is limited in settings, the best that can be said is that it doesn’t get annoying after long periods of time. An overall solid game.