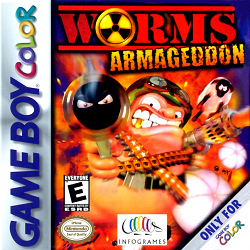 In this review, we break out the banana bombs in the Game Boy Color game Worms Armageddon. We find out if this strategy game is worth plying.

This game was released in 2000. It is a port from the PC game with the same name. We previously played the N64 version. That game managed to score the extremely rare perfect score here. We also tried the Playstation version of Worms World Party. That game also got a great score. So, we were curious to see how well this game performed in the handheld environment.

One thing many people have remarked about this game is the fact that it is a stripped down version of the original Worms Armageddon. This is definitely true, though we technically have not played the PC version at this point. So, this review will discuss the differences between the N64 version and this version.

The first noticeable difference is the fact that there are fewer gameplay options. Still, three versions are still intact: Quickstart (which is a randomly generated match), single player mode, and two player mode.

The next noticeable difference is the fact that the game only allows two team matches instead of a maximum of four. This is likely to compensate for a smaller screen and fewer technological capabilities.

As a result, instead of having four meters to indicate overall team health, you get a single meter. The single meter is just below the firepower meter. The lighter pink represents player 1 teams health while the darker red represents players two health. The meter is also a comparative meter as it basically represents the percentage of health distributed between the two teams. After every hit or kill, the meter will adjust accordingly until one team or other other wins.

In addition to this, there is no general one player campaign necessarily. Instead, the player must compete against a computer opponent in a single player match. If the player wins the overall game, then the player unlocks a new environment.

The options are also modified by a fair bit. You can decide on a number of rules. One notable option you don’t have is retreat time. Just know that it’s very short. What is also present that isn’t in the N64 version is deciding specifically what the arsenal is going to be. For standard weapon, you can decide how much you can have (or unlimited). Do note that enemies will have the same arsenal. For special weapons, you can either turn them on or off. If you turn on a special weapon, then it’s possible they will appear in a weapon crate.

The matches themselves also have a number of changes. “A” and “A” only is for jumping. A single tap will allow your worm to jump forward. A double tap will allow the worm to perform a back flip. “B” is your fire button. Meanwhile, select will allow you to do two things: move the camera around and enable weapon select. Arrows will move the camera around while “A” and “B” will act as your scroll buttons for weapons. Make sure your weapon is flashing to make sure you are in select mode. Pause will pause the game as expected.

A number of people have remarked that there are very few weapons in this game. While this is true, there are still a number of the basic weapons players can get their hands on. These weapons include the grenade, bazooka, dynamite (very powerful), fire punch, flame thrower, jet pack, and battle axe. On the one hand, that is nowhere near the arsenal found in other platforms. On the other hand, do you really want to endlessly scroll through the weapons trying to find the one you are looking for? To me, arsenal isn’t an issue here.

What I do have an issue is the physics. The physics is far more simplistic than in the N64 version. Because of this, the only sure way to get side to side motion from a hit is through the baseball bat. Otherwise, most hits keep the worm in place or forces the worm to fly straight up and down.

In addition, the friction is substantially higher than in any other Worms game I have ever played. If you manage to send a worm flying, the worm will always stick the landing. There is absolutely zero sliding around. This can work against you at times and is something you need to work around to make any big plays during your turn.

While these are the downsides, I do have to comment on the play over time. After a few rounds, I was getting close to just switching off the game and casting this off as a simply boring game. However, as I played the game more and more, a lot of the original fun factor that made both the N64 version and Worms world Party such a joy to play gradually seeped through. Because of this, I’m glad I stuck to playing this one because I did find myself having fun with this one after a while. It may take a couple rounds to find the joy in this game, but it is in there.

Generally speaking, this is one of those games that is easy to get turned off with at first. The more you play, though, the more fun it becomes. The physics are pretty wonky and the worm movement is not that great. Still, after you compensate for these limitations, there is entertainment to be had in this game. It’s stripped down, sure, but what did you expect on a handheld with this kind of hardware limitation in the first place? A pretty decent game if you give it a chance.

The graphics have their strengths and weaknesses. While I’m not entirely sold on the graphics in the gameplay itself, the comical art at the beginning of the match gives this game that much-needed personality this franchise is known for. The pictures really saved this game as far as graphics are concerned. So, a pretty decent job here.

The audio isn’t bad. There are references to other games found in there like the similar sounds of Final Fantasy’s famous intro screens. I’m not entirely sold on the music, but it is pretty good. The sound effects are alright, but nothing huge. A decent job here.

Overall, while it is great to have this kind of game on a handheld device, you do get a stripped down version of it. The physics and worm movement leave a lot to be desired. Still, they can be worked around. The thing about this game is that, the more you play it, the better it gets. It’s unfortunate that the fun starts at such a low level, though. The graphics are decent enough and so is the audio. A pretty good game if you ask me if you are willing to play it enough.

Overall
Furthest point in game: unlocked all the environments.