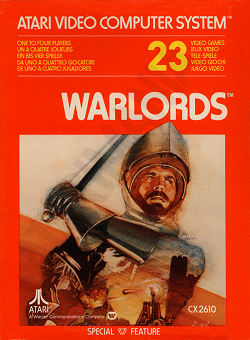 In this review, we check out the action game Warlords as released on the Atari 2600. We find out if this game is worth playing or not.

Warlords was released in 1981 and featured the rather rare for it’s time 4 player simultaneous play.

The object of the game is simple: defend your wall by bouncing the ball away with your blocker. If the ball busts through your defensive wall and breaks your castle, you lose the round. Win five rounds and win the game.

Each player is in a corner and the game begins when the ball appears and starts bouncing around. If you miss the ball with the blocker, then you run the risk of the ball touching your protective wall. If the ball does touch the protective wall, then the screen will flash and a small section will be destroyed. As more parts of the wall is destroyed, your castle becoming increasingly vulnerable.

At seemingly random, the ball will speed up and slow down, making play much more difficult to predict.

Unfortunately, this game does suffer from drawbacks. There is the occasional moment where the ball is simply trapped in a single path for a while. Another downside is the fact that the blockers are so small. It makes defending yourself so difficult, that the game is almost a four way chance more than a challenging game. Sometimes, you are your own worst enemy when the ball becomes stuck between your blocker and your own wall. You risk losing a large swatch of your own wall in no time as a result. Also, the rounded corner messes with the position of your blocker in the corner. It makes play a little harder as a result.

Graphically, this game is nicely colorful and makes good use of the screen play. Again, when the blockers are at an angle, sometimes the graphics struggle to really render your blocker, leaving it somewhat warped as a result if left in a certain position.

The audio is decent enough when it comes to the sound effects. Unfortunately, there is no music, so that’s a bit of a setback.

Overall, this is one of those difficult to control games. While obviously inspired by Breakout, this game could have been better produced. With other players, I can see it being an interesting game to play, but it is still only a half decent game in the end.

Furthest point in game: Gave my player 5 points to see how many rounds are required to win. Still, there really is no furthest point in this game to speak of, ultimately.