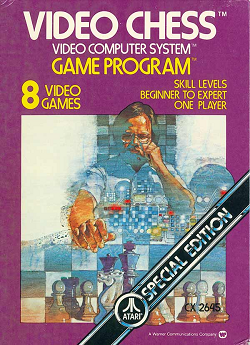 In this review, we give a port to a classic strategy board game for the Atari 2600. This time, we give Video Chess a play.

The game is pretty much exactly what it says on the tin: it’s chess. There’s a few difficulties that can be selected, though in our case, we just played with the default difficulty.

One thing that is notable right away is the fact that moving the “cursor” is a bit of a pain. It almost, if not, does, take a full second to move it from one square to the next. The same delay is made when selecting pieces as well. This artificially raises the gameplay time and, thus, lowers the quality of the game itself.

Another thing of note that pretty much all the moves that I’m aware of including castling are all there, so this game does seem to, at least at first, follow all the basic rules.

When there are fewer pieces on the board, the computer player seems to take a bit longer to think. This is shown through the colors changing more slowly as the computer player thinks. Not exactly sure why because it usually occurs when the number of possibilities seemingly go down.

Graphically, this game is pretty basic. I thought it was strange that it only occupies a certain portion and place on the screen, but it is all there. I actually wished there was some text indicating something like a check or a checkmate, but instead, the kind piece flickers upside down. A strange design choice in my opinion.

The audio is extremely basic with only a limited number of sounds. So, nothing too special here.

Overall, I found this game to be fairly basic. There is plenty of challenge to be had in this game, but the game sometimes breaks. There’s also the occasional slowdown along with the game breaking after you win. The graphical feedback was more limited then I would have liked to see and the audio is exceedingly basic here. Play is slow through selection of pieces as well. Ultimately, this was a very average game at best.