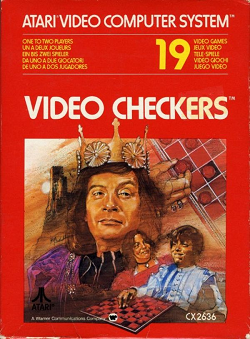 In this review, we check out the Atari 2600 game, Video Checkers. We find out if this version of the classic board game, checkers, is worth playing again.

All of the standard rules of Checkers apply. Just note that the rules of this game include the rule that if you can jump over an opponents piece, you absolutely have to take that move – even if it’s ultimately to your disadvantage. This is what caused me to lose the first time because I forgot that this rule can apply.

I found the default difficulty to be reasonable for the average casual gamer. Once you can familiarize yourself with the controls (which can be finicky at times) and the rules, you’re pretty much off to the races.

Graphically, checkers is kind of a hard game to mess up as it’s merely circles that are two different colors over top of a grid of squares with two colors that alternate (hence the term “checker board”). I found the graphics to be a reasonable interpretation of Checkers. Given hardware limitations, I’d say it was a good interpretation of Checkers.

The audio left a bit to be desired. The saw tooth synthesized sound when you make an invalid move gave this game a gritty feel to it. I get this is an Atari 2600 game, but I felt that the audio could have been better to reflect the casual nature of Checkers. There is no music in this game.

Overall, this game wasn’t bad. It did a reasonable job of doing exactly what it says on the tin. It’s a little bit irritating dealing with the controls here, but it’s an otherwise half decent game.

Furthest point in game: Beat the default difficulty with only losing two men.