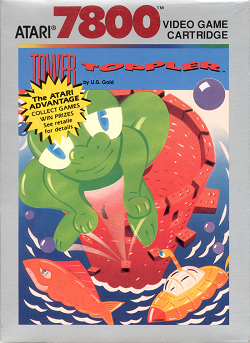 In this review, we navigate our way through the Atari 7800 game Tower Toppler. We find out how well this adventure game plays.

You play a weird big-eyed creature. This creature travels by submarine between towers. The goal is to reach the top of the tower within the time limit.

Along the way, you encounter collapsing floors, slippery floors, elevators, and a number of enemies. If you get hit, you drop a level down. If you fall down from the lowest level, you drown in the water and lose a life.

If you manage to make it to the top of the tower, the tower will collapse in on itself until you make it back down to the bottom where your submarine awaits. You then take on a bonus challenge of shooting and collecting fish. These fish appear to be strange curly objects that look more like shrimp.

You have two abilities. You can either hit a button and utilize a purple ball attack. Alternatively, you can hit a button while moving to execute a jump. This is useful for evading enemies or small gaps in the floor.

Still, you have three lives to work with. Wit the difficulty of this game, it is easy to lose them all early on.

This game was a rather strange one for me. It’s one of those games that makes next to no sense. The only thing that makes sense is the goal of reaching the top. The timer is there for added challenge. As a result, I was left with an “I don’t get it” feeling.

The games difficulty curve is pretty steep. You can encounter a collapsing floor early on and almost immediately get killed. While it is more than possible to master a tower and even beat a tower, this requires memorization more than skill. Because of this, the fun is easily taken out of the game.

The one thing that this game has going for it is the fact that the levels wrap around. There is no real ledge in either left or right direction. This means this game offers a pretty novel experience where most games have such limits.

Generally speaking, I can’t say I can really get into this game. It is more of an exercise in memory work than actual skill. The game is also pretty strange as far as I’m concerned. It is also very primitive. One way to think about this game is the fact that it was released in the same year as Zelda II – The Adventures of Link, Contra, and Super Mario Bros 2. There’s really next to no comparison because this game is just that much more inferior.

Graphically speaking, this is where this game suffers greatly. Weak floors are not different from normal floors. Gaps in the floor are hidden until the last minute because of the perspective issues in this game. While the underwater art isn’t so bad, the fish really don’t look like fish at all. There could have been more colors on the level. Overall, the graphics range from somewhat primitive to getting in the way of gameplay.

Audio is also extremely primitive for its time. There is no music in the game itself. The sound effects are extremely basic. For a game of its time, this game falls far behind other games.

Overall, this game isn’t the greatest game in the world. While the wrap-around feature of the levels is nicely done, that’s about the extent the praise goes. The game is short. The difficulty curve is high and the game is more about level memorization than actual skill. The second you start comparing this game to others that were released at the time (like NES games), that’s when this game keeps falling further and further back. The graphics, at best, are weak, and at worst, get in the way of gameplay. The audio is also extremely primitive. So, I would say this game is not recommended.