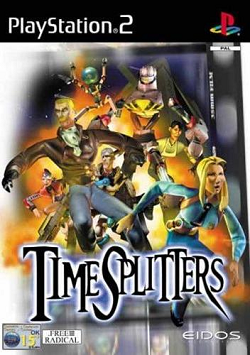 In this review, we travel through time as we play the first person shooter TimeSplitters.

This game was released in 2000 and served as a launch title for the Playstation 2.

There’s not much of a plot to follow other than the Timesplitters have to travel through time and complete certain objectives.

The game features 9 levels spread throughout time. Sometimes, it’s well within the past, but other times, it’s set in the future. These missions are timed, though it’s not essential to complete the levels in a particularly quick amount of time (at least, as far as the earlier difficulties are concerned).

All of the missions seem to follow a sort of multi-player capture the flag style gameplay. You have to find a key item somewhere in the level and take it to a large red circle. Sometimes, the red circle is located near your start point, but other times, it’s located somewhere else in the level.

Aiding you are the numerous guns you can collect along the way. The weapons generally go for period accuracy, but they follow along a particular set of weapons. There are pistols, shotguns, grenades/grenade launchers, rocket launchers, and semi-automatic rifles/machine guns. You always start with one weapon, but you do collect weapons and ammo from enemies you’ve taken down.

Also aiding you are two kinds of items you can collect. One item is the health box which can restore a portion of your health. Another kind of item are the armor pickups. Some armor pickups give you half a bar of armor while other armor pickups will completely fill the armor meter. Armor absorbs damage you take.

Generally speaking, there are two types of enemies. The first type are your standard enemy that shoots at you. The other type of enemy are zombies that require a headshot to kill. If you take a zombie down without a headshot, the zombie will eventually get up and attack you again. Also impeding your progress are the occasional turret that fires at you. You can simply blow these up along the way.

There are three difficulties: easy, medium, and hard. You can select your character, though there’s seemingly little difference in overall gameplay between them.

Also contained within this game is a substantial multiplayer section with numerous options (though things like selecting a map is mysteriously placed in a sub-menu before you access the other options). This element of the game is nicely realized.

What is impressive is that this game also features a level editor. So, you can craft your own levels and, reportedly, even set objects and lighting while you’re at it. This focuses on a tile system and you can select the tileset you want. The game generally takes care of the rest. This definitely boosts the replay value of this game.

There is also a challenge mode which features a challenging element to the multiplayer style. These challenges aren’t easy to complete, but there was something amusing about going up against a squad of enemies composed entirely of ducks that sounds like a Disney character when you attack.

While the secondary features were definitely nicely realized, the primary feature, the story mode, almost seemed like an afterthought. With 9 levels, it’s possible to complete all of them in about 5 minutes each on the easy mode. If you are successful in all of them, that’s 45 minutes of gameplay. With a few retries because you’ve never played before (but may have played an FPS game before), you’re looking at 2 hours of gameplay before you suddenly see a the credits roll. I thought the shortness of this main mode was a major pitfall of this game.

Another pitfall of this game was the difficulty spikes found throughout the game. The first level seems easy enough until you get close to the end and realize that the exit out of the tomb is actually very well hidden on the way back. The game then gets easier for several levels before spiking in difficulty with Planet-X. After that, the last level has a bit of a difficulty spike again. Then, when you think you’ve gotten used to the way the game works, you try the medium difficulty and it’s next to impossible to complete in comparison. For me, I just gave up playing knowing that there was so little gameplay ahead for me.

There is suggestion that this game is simply a continuation of some of the features found in Perfect Dark and Goldeneye 007. Personally, I think this game follows more in line with what is found in the Turok series – more specifically, this game more closely resembles Turok – Rage Wars (though with a few less features) in my books.

Graphically, this game is impressive for a game of its time. While it’s not quite as flashy as Perfect Dark, it is more detailed than 007: The World is Not Enough. I would say a small nitpick is the fact that there may not have been enough repetition in the textures because I did find myself getting lost from time to time in spite of the somewhat simplistic level design. The shattering glass was nicely simulated though.

Overall, this game features an unfortunate situation where the main story mode is completely overshadowed by the secondary multiplayer features. With difficulty spikes and an incredibly short set of levels, the gameplay is virtually non-existent. The multiplayer mode was nicely realized and, impressively, features a level editor which really boosts the replay value. The graphics were great, though a little more repetition would have been great to see as it got to the point of being disorienting. The voice-work and other sound effects were great and the music was pretty good too. So, if you’re looking for a good multiplayer game, this game works, but as a single player game, this game just doesn’t cut it.

Overall
Furthest point in game: Beat the game on easy. Didn’t end up making more than two attempts on the medium difficulty.