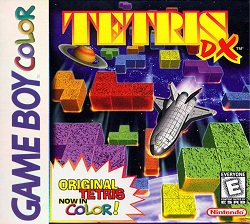 In this review, we beg the game for that elusive line piece in the game Tetris DX. We find out if this game is a great follow-up to the original Game Boy version.

This game was released in 1998 and would be essentially a re-release of the original Game Boy game, Tetris. This is also a launch title for the Game Boy Color.

There are a couple of modes supported in this version. The first and primary mode is the classic Marathon mode. In this mode, you keep playing until you die. There’s no way of actually technically winning in this mode, but it is a test to see how long you can last and how many lines you can crank out before the difficulty becomes too much for your skill level.

The next mode in this game is Ultra. In this mode, the quest is to get as many lines and points as possible before the timer (set to three minutes) runs out. If you don’t die in the process, you win. If this rings a bell, this mode is also featured in the later N64 release, The New Tetris which also features this mode of play.

The third mode of play is 40 lines. The goal is to get 40 lines as quickly as possible. If you win, then you get a particularly long fireworks display.

The final and most interesting mode is vs. This mode pits you against computer players of varying difficulties (easy, medium, or hard). It also shows profiles of players already found in the game pack. You can even compete against yourself (?) which I presume is simply a computer player that is supposed to match your skill level as a player.

If you’ve played Tetris a lot and have become quite skilled, there’s no worry that this game won’t offer you a challenge – even in this mode. As someone who has gotten quite good at this game, I can say that even medium can be challenging. From what I can tell, the easy computer player rarely sends junk over. Even if junk is sent, it’s most commonly one added line an rarely two. Medium periodically sends junk over. Often, it seems that the computer player sends junk over at near impossible speeds at the beginning, but it does happen. When junk is sent over, it’s often two and sometimes three lines worth. Hard, on the other hand, sends junk over at roughly the same pace, but the junk is more commonly three lines.

Junk moves up from the bottom. All it is is all spaces filled save for 1 line. While this opens the door for a Tetris whenever you get a line, the threat of being sent up to the top is all too real. To make matters worse, the line of space does occasionally move, making clearing the junk that much more difficulty. If you are able to clear out the garbage in a timely matter, then the game ends up being a see-saw battle before one player dies.

One feature found in this game that wasn’t present in the original Game Boy version is the ability to save your game. If you turn off the power of your game, you can turn it back on and you’ll be given the opportunity to continue. I never tested this myself, but most sites report this as a feature.

Another feature is the ability to create and save profiles. This profile saves the total number of lines as well as indicate the level of “power” that profile has. To the best of my knowledge, you don’t get anything extra for getting more lines and what power means does elude me unfortunately. So, these statistics, while nice, don’t really add that much to the game. The ability is also nothing new to the Game Boy experience as many regular Game Boy games, by now, have saving abilities (i.e. Super Mario Land – 6 Golden Coins).

One feature I noticed that was surprisingly absent was Type B play. In the original Game Boy version, you could play a variation called Type B. In this mode, you had a goal for number of lines. With it, you could set how high the initial amount of junk is available. While 40 lines is arguably similar, it isn’t really the same thing because you didn’t have the option to set a certain amount of garbage in the field. There are modes of play that allow you to set the initial level, however, the level simply raises the floor by one line and shrinks the overall field instead.

In term of overall gameplay, the only thing this game offers is a couple of extra modes of play and the ability to face off against a computer opponent. This is seemingly basic enhancements. After this, there’s not a whole lot extra to speak of (note that the original Game Boy version also supports 2 player mode). Of course, that doesn’t take away from the fact that Tetris is generally a really good game to begin with. I just expected more in the realm of gameplay.

Graphics is probably where the biggest improvements come from. As a launch title, this does a pretty good job at setting the tone for what could be offered in the future of this handheld device. The full color graphics was an excellent thing to see. The animated backgrounds during play were also a treat. The colored cut scenes did work quite well with the nice new supported color pallet. It ultimately added a lot over the original black and white monochrome screen.

The music was surprisingly disappointing. The sound effects were quite decent, but the music was a bit lackluster. Music Type A might be familiar and may have some long lasting appeal, but it was a bit too laid back for my tastes. Type B and Type C music also left a fair bit to be desired. The implementation of the music, on the other hand, was actually nicely done. As you get further up in the playing field (highest placed block is what counts here), the music speeds up to be more frantic. When you reach critical heights, the music changes to a high toned track. I like how that was implemented, but I wished for better. I do like the ending theme of vs when you win and the reference to the original Tetris music was a nice touch. So, I will say the audio was decent all around.

Overall, it was interesting to see how games moved to full color on the handheld devices. This game does set the stage nicely for what could be accomplished on this system. I wouldn’t call it superior to what the original Game Boy version accomplished, but there is enjoyment to be had even if this game doesn’t innovate from its predecessor that much. A solid play.