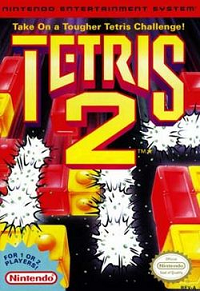 Tetris 2 is the sequel to the wildly successful NES (Nintendo Entertainment System) release of Tetris. We take a look at what the sequel had to offer.

When some old school gamers think of Tetris, there’s a good possibility that their first time playing it was either on the NES or the Gameboy. It featured pictures of the Russian onion dome archetecture. The game was simple, rotate and drop pieces to make lines. You go up a level by clearing 10 lines. A new level would increase the fall speed of the blocks and also increase the amount of points you could earn. You die when the receptacle you were playing in fills up.

Tetris 2 tries to reinvent itself. The game was released in 1993. Unlike its predecessor, this game utilizes colour matching instead of creating lines all the way across the playing field.

The playing field features a set of bombs. How many bombs depends on what difficulty setting you set at the beginning or how many levels you beat.

When I played this game, I couldn’t help but think of Dr. Mario which was released just three years earlier. Both games had a very similar objective. Clear the bad blocks out to advance to the next stage. Instead of viruses, it was bombs you had to clear out.

Tetris 2 also tries to retain some of the original blocks while adding new and unique blocks. Another feature is that even though one part of the block is placed down, it’s possible to move other unattached parts of the block around still as they fall further down. I thought that was an interesting feature.

As I started playing, I personally gradually lost the motivation to keep playing. I knew I could amp up the difficulty of this game, but there was just something about this game that seemed so lack-luster. I tried to get into this game, but, after a while, any magic that was in the game just rubbed off and I just wanted to turn it off.

The graphics was decent enough. There’s that interesting design of the birds reminiscent of the Desert floor drawings in Peru and the occasional flash from the bombs was an interesting touch. Unfortunately, that’s about the most I can say about the graphics. There was just little else in the way of graphics.

The music sounds like it’s trying to be interesting, but it just gets repetitive after a while and, ultimately, becomes forgettable. The sound effects, I thought, were actually a highlight. They brought the game a step closer to being bearable. Unfortunately, sound effects alone doesn’t carry a game into the category of being decent.

Furthest point in game: Beat a number of the easier levels, but got bored and stopped playing after that.