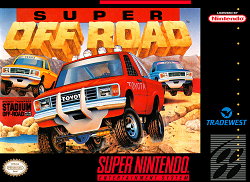 In this review, we hit the nitro in the SNES game Super Off Road. We find out how well this racing game plays.

This game was released in 1991. Previously, we reviewed the Sega Genesis version. That game got a great score. So, we thought we’d try this version to see if it’s any better.

Because the two games are so similar, this game will focus on the differences.

The first difference is the fact that there are bails of hay that can slow you down. They only appear after you play a few races and will randomly appear. They do appear in set configurations or non at all. What you get is totally random from the looks of things. This certainly adds a lot of variety to the tracks. While it makes the tracks more difficult to play, that difficulty affects every racer and not just you. This affects your routs through the tracks. Do know that after about 3 or so hits, they break apart.

Another difference is the addition of a hall of fame. While the scores are seemingly obscure at first, the game seems to keep track the most amount of cash you were able to obtain before finally losing completely.

Once again, I am unable to determine if this game really has an ending or if it keeps going.

The graphics are nicely done. While each track only spans the size of a single screen, the level of detail put in is quite impressive. An interesting feature is the use of a 3D flag person. At the start and end of each race, he appears in a little circle near the shrunken version of where he is located. The animated effects of the hay is also nicely done. A great effort all around.

Meanwhile, the audio is a big strength of this game. The music is all around excellent. My favourite track has to be the speed shop, but the music in other parts of the game is quite good. The sound effects are also quite spot on. The realistic crunching of metal is nicely done. The nitro sounds are also quite well done. It would have been nice to hear some additional sounds in the shop, but that’s just a nitpick of mine. A great effort here as well.

Overall, it’s rather strange to me that a port released 3 years earlier is so superior to the Genesis version. The bails of hay add so much to the gameplay and the hall of fame part is a nice touch. The graphics are great and the audio is also quite a treat. Definitely a recommended game as far as I’m concerned.

Overall
Furthest point in game: Maxed out all stats and netted a total of over $33,000,000 before quitting.