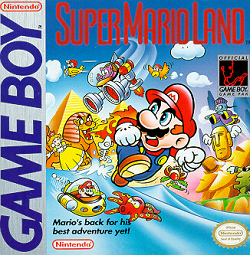 In this review, stomp on some goombas in the Game Boy game Super Mario Land. We find out how well this adventure game plays.

This game was released in 1989. We previously reviewed the sequel, Super Mario Land 2 – 6 Golden Coins. That game earned a pretty impressive score. So, we thought we give this game a try to see if it is just as good.

It seems that Mario is on another rescue mission in this game. This time, Mario is attempting to rescue Princess Daisy. This is actually the first time I remember encountering this character in the Mario universe. All the other games I played that involved princesses involved Princess Peach Toadstool.

In total, Mario is tackling four worlds. Each world contains three levels. This means there is a total of 12 levels to tackle.

Along the way, Mario encounters a number of question mark boxes. Most contain coins, but some contain power ups. These power-ups include a mushroom (makes Mario grow), a power flower (allows Mario to fire projectiles), a star (for temporary invulnerability), and a heart (for a free life). Besides the alternate mushroom being replaced by the heart (still the same effect), this compliment of power-ups matches up with the original NES game, Super Mario Bros.

Like many other Mario games before it, if you collect 100 coins, you earn a free life.

What has changed is the compliment of enemies. Probably the only two enemies that are the same are the goombas and the enemy plants. While there are Koopa Troopa’s in the game, it seems they swapped out their shells for bombs. There are no Koopa shells to kick in this game.

There are bugs that fly through the air that drop arrows, robots that pop off their head and throw it at you, and ninjas that can only be defeated by the projectiles you throw to name a few. There are so many changes to the enemy compliment, it’s almost a whole new game.

The flower power up also gives you something that is unlike previous games. In other games, you throw fireballs that bounce along the ground. In this game, you seemingly throw a black ball that bounces diagonally everywhere. The good news is that you can use this power to collect coins. The bad news is that this is now a much less effective weapon. Unless you are close to an enemy, you have to line up your angle and bank shots and hope for the best. To make matters even worse, you can only fire one ball at a time.

To make matters even more different, some levels feature side scrolling elements. This is probably one of the few Mario games that contain absolutely no swimming. Instead, Mario is on a submarine that fires shots straight out front. In addition, there are even a few flying missions where Mario flies a plane that operates similarly to the submarine.

At the end of each level is a goal area. In what is probably one of the most positive changes to the formula, you no longer have to jump as high as you can to take down a flag on a flagpole. Instead, you have two doors. One door is on the top of the screen while the other is on the bottom. If you make it into the bottom door, you merely move on to the next round. If you make it into the top door, you get treated to a bonus round.

In the bonus round, Mario will flash over four levels. At the same time, a ladder will flash randomly among the four levels as well. Hit the jump button to stop the randomizing path. Mario will travel along the floor. If there is a ladder that goes either up or down, Mario will take it. The possible bonuses are a power flower, one free life, two free lives, and three free lives. Unless you already possess the power flower power up, you really can’t lose out in this game, though some prizes are better than others.

At the end of each world is a boss fight. If you defeat the boss, you’ll get access to a locked door. Beyond the locked door is supposedly Princess Daisy. In the first three worlds, this is a decoy, but in the fourth, she’s the real deal.

When I went into this game, I was fairly excited about this game. With few exceptions, Mario games have typically been very entertaining. In this case, I thought the game was not the strongest Mario game out there. There are a number of reasons for this.

One reason is the flower power up. The effectiveness of this power up is reduced dramatically by the way your new power behaves. Like other games, most of your enemies are on the ground. Unless there are varying platforms that permit the bouncing, this weapon is pretty weak. While it is better than nothing, I do scratch my head on why the change occurred in the first place.

Another problem I have with this game are the devices. While it does sound like a good idea at first, the implementation just seemed awkward. Given how challenging the side scrolling areas are, this might be less than appealing to Mario fans who don’t necessarily play games like Gradius III. I was left with the impression that this was tacked on in the hopes of generating newfound excitement. For me, that excitement never materialized.

Another puzzling element is the fact that either Mario is over-sized or the blocks are tiny. I’m not sure why the question-mark blocks and the breakable blocks are so small. It makes the gameplay a little more awkward.

In addition, the movement characteristics of the first NES Mario game is used in this game. You can’t go backwards and some of the controls just have that sense of stiffness going for them.

It’s nice to see attempts to add innovation to the franchise, but it’s unfortunate that so many of the innovations didn’t really work. Probably the only thing that really worked was the bonus stage and modifying the ending of each level to accommodate this. Beyond that, it’s pretty hard to find anything new that is particularly exciting.

Having said that, the basics this game retains work pretty well. The ability to jump on enemies and the power ups work pretty well (sans modified flower power). The level designs can be pretty interesting at times as well.

Generally speaking, by Mario standards, this is a surprising flop for me. There are a lot of experiments that went into this game. Unfortunately, few of them worked. What did work is the ending goal. Changing it from the flagpole mechanic to the duel door system works pretty well. Meanwhile, the flying and diving of the different vehicles just seemed tacked on. The changing of the flower power didn’t really work either. What is retained from previous Mario games is a bit hit and miss. The stomping system is great, but the lack of going backwards and the stiff controls didn’t work so much. Some of the level design is interesting though. Not what I was expecting in a Mario game.

The graphics are decent enough. The detailing and backgrounds are pretty decent. The effect of the invincibility star works quite well. Unfortunately, some of the faster movements is subject to the unfortunate blurring limitations in the hardware. So, pretty good, but nothing amazing.

The audio is surprisingly weak. Probably the only track in the game worth listening to is the regular fourth world music. Beyond that, the music loops are extremely short and repetitive. Some of them even start to get irritating after a while. The sound effects, meanwhile, are only mildly better.

Overall, I haven’t been this disappointed in a Mario title since Super Mario Sunshine. While this game tries to be innovative, a lot of the ideas just flopped with the exception of the level ending. Some of the mechanics carried over from previous titles does work. There is some entertainment to be had in this game, but you have to dig a lot more for it. The graphics are decent enough, but blurring can be a problem for some of the faster movements. The music loops are short and very repetitive. Some of the music is even annoying. In short, there are many far superior Mario games out there. If you skip this game, you won’t be missing much.