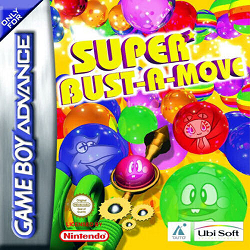 In this review, things get a little bubbly when we play Super Bust a Move. We find out how well this Game Boy Advance puzzle game plays.

This game was released in 2001 and is a port from the Playstation 2 version. It is one of many in the series.

There are two modes in this game that a single player can enjoy: 1P Puzzle and vs. CPU.

In the 1P puzzle, players begin in “world” A. Each world has 5 levels. If the player beats world “A”, then the player has a choice between world “B” and “C”. The player will travel through this triangle shape until reaching the end. In the normal course of play, players can’t play world “B” if they already chose “C”. They have to move on to the next row (D, E, F). If the player chose B, then F isn’t even an option. If the player chose C, then D is no longer an option. In total, players need to complete 7 worlds in order to complete the game. That means players will have 35 levels to play, though which ones players end up with is completely up in the air after world “A”.

A lot of what has shaped Bust a Move has wound up here. There are rainbow bubbles that change to whatever color was cleared by touching colors. The solid bubbles that can only be cleared by clearing the clustering bubbles around make a return. You need at least three matching bubbles to clear them.

What is new in this game are the extra large bubbles. If you hit that bubble with a matching color, then every bubble in the level turns into that color, making completion substantially easier. THe goal is typically to fully expose the flashing bubbles.

Another new feature are the different shapes the playing field takes. Sometimes there are dividers down the middle. Sometimes they are extra wide. Either way, the variety will definitely keep things interesting throughout play.

In addition to this are the occasional levels where you can play with shrunken bubbles. This allows for better maneuverability as you can squeeze bubbles into the tiniest of spaces. They will grow back to their original size once they have stopped moving.

The second mode of play is a classic you vs. the CPU mode. You can pick a character out of 8. Different characters have different “attack patterns”. Either way, you have to defeat your opponent by forcing the computers bubbles over the line before yours. To do so, you can constantly clear out your own space to give yourself more room. You can also send garbage bubbles over to your opponent either by clearing out more than three bubbles at a time, or causing gravity to remove extra bubbles on your screen. Defeat all 10 opponents to win.

Some people say that this game is a bit too easy. I figured this game depends a bit on luck both on what bubbles you randomly get and luck of your aim. It’s more than possible to miss some of your shots. Sometimes, what looks like an unlucky shot can prove to be a fatal move. Other times, an unlucky shot means you wind up clearing half of the level in the process. Sometimes, you have two bubbles right at the line and all you need one bubble that is the correct color. After a half a dozen bubbles, the color never arrives and the level drops those bubbles below the line, forcing you to lose. In short, some games are just easier while others are just plain difficult, and it all depends on what you get in the shuffle.

There’s plenty of content to be had in here, though you are more than able to get through the game without having to worry too much about battery life here. This game manages to get the right mix of lots of content while still allowing players to complete the game. I only ever used 3 continues in puzzle and 2 in vs. CPU battle, though I have no idea how many continues the game gives you.

Generally speaking, this game is decent, though it does depend a lot on luck and possibly lucky shots. There’s a lot of content to be had, but completion of the game in a single day is more than possible.

Graphically, this game was decent enough. There were a lot of interesting backgrounds that are thrown at you. The characters are a bit hit and miss. Some of them are pretty average, while others can be downright distracting. Overall, can’t complain too loudly about the graphics, though nothing really stood out for me.

The audio was OK. The music was passable and the sound effects are OK. Again, nothing really stood out for me in this game that makes this particularly memorable. It goes for a very upbeat atmosphere in general.

Overall, this was an OK game. It has a few new tricks to keep things interesting for players who are both familiar and new to this game. Unfortunately, there wasn’t a whole lot in the way of wow factor. The graphics were decently varied, but nothing huge. The audio was also decidedly average. In short, it does a good job at passing the time, but not otherwise particularly memorable.