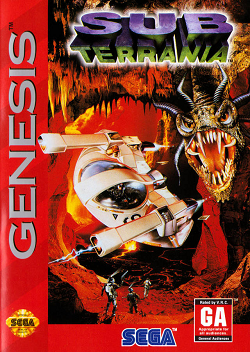 In this review, we blast our way through the Sega Genesis game Sub-Terrania. We find out how well this shooter game plays.

The story is pretty straight forward. Aliens have attacked a mining location. The player takes control of an experimental space craft to go in and rescue the various trapped miners. While the technology is limited, the players outside help tries to work quickly to upgrade surveillance technology to gather more detailed intel.

When you start the game, you’ll quickly realize that this really isn’t your run of the mill shooter. While it contains numerous elements from the game Jet Pak, there are a few added features and new twists on old ideas that separate this game from others. One added feature, seemingly borrowed from the game Choplifter, is the ability to rescue people. Unlike that game, however, you don’t necessarily have to destroy something just to rescue them. You just need to land your space craft near them before they get in.

Other ideas is the fact that this game is omni-directional. You can basically shoot in any direction. In addition to this, you can obtain various upgrades for your ship on each level.

One upgrade is the Red Level. This is found via the red capsule. Collect these and you’ll increase your firepower.

An item you can pick up is the missiles. This is found in the capsule with the missile icon. You get 10 missiles that will do extra damage per shot. Also, you can get free lives in this game as well.

In addition to this, there are stat regenerating capsules. Players will encounter yellow ones early on to regenerate fuel, but later on, blue ones will appear to regenerate shields. Unlike other pickups, you have to park your space craft next to it and wait a second for the recharge to take place.

There are a few stats to keep an eye on, some of which were alluded to earlier. One stat is your fuel. This shows up as the red bar on the upper left hand corner. If you run out of fuel at any time during your mission, then you fall down and die. Very quickly on, this will become a big factor in how well you do, so this is a big one to keep an eye on.

The yellow bar is your mega-fire meter. It doesn’t go very far, but it does charge up quickly. To charge it, simply don’t fire. When you fire fully charged, you’ll unleash a burst of firepower. The higher your red firepower is, the more you can charge this.

A third, and the second most important thing to keep an eye on, is your shields. This shows up on the bottom right hand corner. As your ship takes damage, it takes away from the shields. The more damage your shields take, the more red the current ship icon looks. Lose your shields and you’ll blow up.

On the bottom left hand corner, you’ll be able to see what item you selected. Initially, you won’t have anything. However, as you obtain more items, you’ll be able to cycle through the different weapons and items you collect along the way. What you have selected is surrounded by the square.

A big element in this game are the objectives. The idea is that you complete the objective on each level, then land on the finishing pad after to complete the mission. Rescuing people is often optional, but recommended because they grant you bonus points.

Your objectives are explained on the intro screen. Often, you’ll need to pick up a ship module to help upgrade sensors. Not all levels are so simple, however, as you’ll find that there are other things you must do to complete your mission. Often, you’ll get hints in the intro screen, but that’s about it. It’s up to you to connect the dots and make your mission a success.

For me, this is one of those games I wanted to like more than I did. One of the big reasons why I wanted to like this game more is because it ticks a lot of boxes in what helps make a great game.

One of those boxes is the great intro sequence. The story is well laid out, however simple it may be, in the beginning. There are great visuals and effects. It is to the point that I almost felt like I was playing a DOS game more than a Genesis game. As a result, I really got excited about this game going into the main menu and the start screen. It may have been a little on the long side for me, but that is a very minor nit-pick.

Another thing people mention about this game is that it has a very unique style of play. I wouldn’t go so far as to say it’s a totally unique game, but the style presented here is certainly a fresh take on older ideas. This generally revolves around the controls, but I would also argue that the inclusion of missions and objectives also play a roll in this as well.

In addition to this, objectives are fairly user friendly. They aren’t insultingly difficult, nor are they easy to the point of being boring. They will make you think, so it does hit that sweet spot of where you want to be. This game strikes a great balance in that respect.

At this point in time, you might be asking me, “why the comment about not liking the game as much as I wanted to?” The answer boils down to one thing: fuel. This is one of those games that does so much right, yet one element just kills the gameplay. You burn through the fuel so quickly. Even when you put forth effort to conserve it, the fuel still winds up running out faster than you’d like.

Because of the fuel problem, even though puzzles are well thought out, you end up having to rely on memory work for success anyway. This is because you run out of fuel while looking around and figuring out what you need to do. For long time readers, I often get irked by games that rely on the concept of “you either know the solution to this problem or you fail miserably”. Often, there’s just no joy in figuring out the solution. In this case, you basically die ever level or so figuring out the puzzles. Once you figured it out, you beat the level and move on to the next nearly impossible task of figuring out the puzzle the first time around. I just don’t find that very fun.

Generally speaking, this game is an acquired taste as far as I’m concerned. If you are already a huge fan of the Genesis, this game can be appealing to you. For me, looking at the grand scheme of things, this game feels more like a missed opportunity. It has a refreshingly different style of play, great intro, good upgrade concepts, and a nice mission objective feature. The short fuel supply, unfortunately, crashes the party and holds this game back. For me, I ended up ending my run quite early on because of the fuel issue.

Graphically speaking, this game is pretty solid. It competes quite well with the higher calibre games that were released in the same year. The visuals in the intro really are impressive. The special effects and enemies work quite well. The levels are nicely drawn out. So, a pretty good effort all around here.

The audio is alright. The music is pretty decent and the sound effects are nicely done. A decent all around job here too.

Overall, if you are looking for something a little different, then this game may be worth checking out. If you like Sega Genesis, but haven’t played this game yet, there is a good chance you’ll like it. There are great features to be had here in the game including a nice blend of older concept, the inclusion of objectives, and the multi-directional gravity controls. Still, fuel gets burned up way too quickly, ruining a lot of the experience. The graphics are nicely done and the audio is pretty good too. An acquired taste as far as I’m concerned.