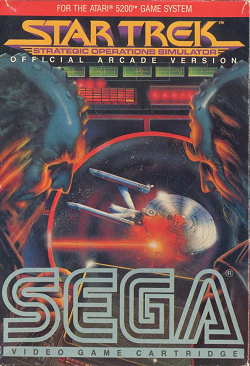 In this review, we take the warp drive online in the Atari 5200 game Star Trek: Strategic Operations Simulator. We find out how well this shooter game plays.

You take control of the star ship Enterprise. Your mission is to clear the sector of hostile Nomad Klingon ships.

The game has three levels. There is a simple level with a few ships. The next level is a somewhat more complex level with more ships. The final level pits you against one very fast moving ship that lays out mines everywhere in addition to the torpedo’s it fires. If you complete all three levels, then the game will say that you defeated the Nomads. You are then transported back to level 1 with the difficulty increased.

In the more difficult levels, there is an odd yellow ship that generally reacts to your movements. This makes this ship either easy or difficult to hit, depending on the situation you find yourself in.

You’ll encounter these space stations. The objective is to defend these stations. IF you fly into one, you’ll get an additional dot of health.

One other thing of note is that there is a fourth sort of bonus level. The objective is to fly towards as many space stations as possible in a hail of meteorites or other objects flying through space. These levels force you to move automatically and is the only kind of level that doesn’t permit the use of weapons fire.

The “simulation” ends when either you or all the stations in the sector are destroyed.

In the Heads Up Display (HUD), you’ll notice three points of interest. The first is the radar. This contains very basic objects that are around in the sector. While this is great for navigation, it isn’t the most accurate source of information when you find yourself in combat.

In the lower section of the screen, you have your main view screen. If you get close to an enemy, you can use this screen for much more detailed view. You can fine-tune your aim with this screen as you open fire on the enemy. Be quick about your aim because the enemy will not hesitate for long to fire at you.

The final point of interest is the bars on the upper right part of the screen. The green line, I believe, is the shields. The brown circles represent the hull of the ship. While you can run out of shields, you can’t allow the hull to fall to nothing. Finally, the purple line represents warp drive. If you move backwards, you’ll be able to move more quickly. You use up energy, but you can retreat with this.

The big problem I have with this game is the limited levels. There is all of four levels if you include the bonus level. In addition, the size of the level is limited to about the size of the radar (even though it wraps). This makes for some limited gameplay.

Another problem is the fact that there’s no high score system. You just get a high score and just, well, remember it instead. On a related note, the bonus points system is unclear. It turns out, you get bonus points for completing levels. How much was never really clear. All I knew was that I start the next level with an even higher score.

On a more positive note, the duel first person and top down shooter screens work surprisingly well. It made for some nice tight controls which help improve gameplay.

Generally speaking, this is an OK game. It wasn’t great, but it wasn’t bad either. The game has its strengths and weaknesses. The weaknesses include a somewhat unclear scoring system and limited level space (and limited number of levels for that matter). The strengths include a helpful HUD and good controls. So, not a bad game in the end.

Graphically speaking, the radar is a little bit excessive in the simplicity. All you get are small triangles and squares in a small number of colors. The ships in the first person view, however, are nicely done. Unfortunately, the screen is very limited in what you can see in the distance. It is also blue for some reason.

There are a few jingles which aren’t bad. The sound effects are decent enough as well. So, not bad on that front.

Overall, this was an alright game. It has its strengths and weaknesses. The number and size of the levels are pretty small. The view screen system is pretty good and the controls work pretty well. Some of the graphics in the first person view are pretty good, but the radar graphics leave a fair bit to be desired. The jingles in the game are decent and the sound effects aren’t bad. So, worth checking out, but don’t expect miracles.