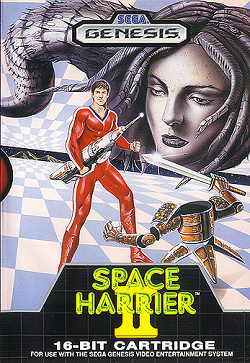 In this review, we fly through the game Space Harrier II for the Sega Genesis. We find out how well this third person shooter game plays.

This game was released in 1989. We’ve never played this game series before, so this is our first experience with it.

The protagonist, Harrier, receives a distress call. He then jumps into action and comes to the rescue.

You can select which stage you want to start with. From there, Harrier will fly out.

In this game, you have the ability to fly. Although you can change direction somewhat, the enemy flight patterns are scripted.

You have the one weapon you carry with you. Besides moving around, all you can do is fire your weapon otherwise. This puts more emphasis on defensive moving and strategic shooting. Enemy fire will be directed at your general direction, but you have a small window to work with to fly out of the way.

In addition to this, you have 5 lives to work with. Run out of free lives and it is game over.

At the end of each stage, you encounter a stage boss. Beat the stage boss and move on to the next stage.

One thing that sticks out at me right away is the difficulty. The difficulty is a little more on the tougher side of things. It’s not overwhelmingly difficult, but it also is no walk in the park – especially if you are encountering a stage for the first time.

Another noticeable fact in this game is the fact that it’s a little lean on the features. There are no real power-ups or items to collect. Instead, you are mostly focused on posting the highest score possible before either the enemies or terrain finishes you off.

Because of the difficulty, players won’t last very long. Still, because it’s possible to learn the different patterns in a reasonable manner, this game is one that won’t keep pushing players back. Instead, players can find themselves gradually getting further and further ahead. So, I did feel that the game is a little bit more on the inviting end of things in spite of the difficulty.

Generally speaking, this game is OK. It is pretty lean on features, and it is a little more on the difficult side of things. On the more positive end of things, you get a full 3D environment to play with. It is also possible to memorize the enemy patterns, so this game is pretty easy to come back to after a defeat. So, a decent job overall.

The graphics are pretty good. The fact that it’s a 3D game definitely gives it a leg up on the competition. The fact that the various sprites are actually fairy well drawn is also a plus. The animations are well done. The ground is a little basic for my tastes, but this game is definitely well done as far as graphics are concerned.

The audio tells an interesting tail. At first, when I heard the music, I thought this was going to be a strong game. Unfortunately, I found out that the stage track is the same for every stage. So, it does get repetitive. The other tracks are only heard if you are going through menu’s or reaching bosses. This is a shame if you ask me because you have basically put a vast majority of the music into a tiny part of the game. The voice samples work well and the sound effects are pretty good. If there was more variety in music on the stages, I would have said it is a well done game, but it ends up being only decent.

Overall, this is an alright game. The difficulty is a bit on the tough side of things, but the game is inviting for players to try again because it’s more than possible to memorize enemy attacks on the next attempt. The lack of very many features is a bit of a drag as it makes the game a little simplistic. The graphics are bolstered by the 3D environment. As a result, besides the sometimes sparse ground patterns, the graphics are a strong part of this game. The audio is pretty average thanks to the incredibly repetitive stage track that plays on every track. An overall decent game.