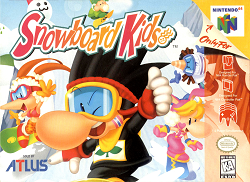 In this review, we hit the slopes for the battle racing game Snowboard Kids.

Snowboard Kids was released in 1997 and would spark a small series.

Essentially, the game is about playing as a character in a series of snowboard cross style racing with weapons, items and coins.

You can race as one of a small handful of characters including Slash, Nancy, Tommy, and Jam. Each character has their own strengths and weaknesses divided into speed, cornering, and trick.

The main courses are where the main game is at. You have a limited number of courses you can access at first, but as you win in each one, you get to be closer to earning your passes which unlock the hardest (be it course difficulty or opponent difficulty) courses in the game. Each race consists of you and three computer players. Beat your opponents and you’ll win a trophy. The number of laps on the course depends on the length of the mountain. Sometimes, you’ll have as little as two laps on the course while the shortest requires you to race a whopping 9 laps.

Along the way, you’ll encounter coins and jumps. Each coin will earn you 100g. Jumps, on the other hand, give you the opportunity to earn even more gold if you execute tricks. If you hold down A and release while pushing the control stick a certain direction, you’ll be able to perform that trick depending on which way the control stick was pushed. Up allows you to perform a front flip. Back means you’ll perform a backflip. Left or right allows you to perform a twist. If you land that trick, you’ll earn an additional 100g. If you point the control stick at an angle, you’ll be able to perform a combination trick. Successfully landing this combination trick will earn you a nice 150g. Each character has their own secret move. If you figure it out, you’ll be able to see a different color of sparkle as opposed to gold. If you successfully land the special trick, you’ll earn a massive 250g. In addition to this, you can also, in the process, grab your board with the C buttons. The side you grab depends on which C button you press. If you hold down on the C button, you’ll hold on to it longer, earning you even more gold. Unfortunately, you can’t perform a board grab while performing a special trick. While the payoff isn’t as great for grab tricks as regular stunts, it does add a nice little bonus. Landing these tricks isn’t as easy as it sounds because you have to fully execute that trick (meaning the sparkle has to finish) before landing. Failing to do so will result in your character wiping out. So, you have to strategize on what move you want to perform on which jump before executing it or else you’ll risk falling behind your competition.

Gold, as you can imagine, plays an important roll in this game. In fact, gold plays two rolls. The gold you earn on the course can be tallied up at the end of the race (provided you didn’t finish dead last) and contributes to what you have total in the bank. With that gold, you can buy better boards in the board shop. In-race, though, they also allow you to purchase items and weapons in the mini-shops found throughout the course. Each time you run through these shops, you spend 100g for a randomly selected item/weapon.

Items and weapons are divided into two. Blue shops and the blue box are where your items are located. Items can help speed you up or slow your opponents down. These include rocks which you drop on the course to trip your opponent, ghost which temporarily scares and slows down an opponent (whoever is in the lead if you aren’t winning and whoever is in second if you are in the lead), invisibility which temporarily turns your boarder invisible and protects you against weapons fire and fry pans, and fry pans which appears above all of your opponents and squashes them – stopping them dead in their tracks until they are able to get up and continue racing.

Weapons, on the other hand, are found in red shops and the corresponding red square. You get three of a weapon for you to fire. The weapons you get include snowmen that stops your opponent from turning, hands that pushes your opponent over, and parachutes which launches your character up in the air and forces them to spend a long time up there before being able to land and continue racing. If you aim correctly, the weapon fire can lock onto an opponent and move in their direction. This helps you ensure that you make your mark. Some weapons have peculiar behaviors like the snowmen that bounce off of walls and bombs that wipe out everyone in the blast radius when they go off. So, be aware of these quirks before you fire them.

A large amount of strategy can go into weapons (Z button) and items (B button). For instance, if you’ve fallen behind, you are more likely to obtain items like fry pans and speed boosting fans. If you are in the lead, chances are, all you’ll get are rocks and invisibility. If you’re lucky, you’ll also get the occasional ghost as well to use on whoever is trailing you. While rocks seem borderline useless at times, you can use them by strategically placing them in front of item and weapon shops. Shops tend to get more traffic as a general rule, so when an opponent tries getting a weapon, they’ll also hit your rock. Another interesting place to place rocks are near ski lifts. While there’s never a guarantee your opponents will hit those particular places, you have a better chance than randomly distribute them on the course.

If someone fires a weapon at you, you’ll likely see an exclamation mark appear above your character. This is an indication that you need to take evasive action. Sometimes, a large amount of turning will allow you to evade the fire. Jumping might also help if you can time it correctly. However, the easiest method of evasion is using the invisibility item so you can see the weapon pass right through you unharmed.

Another thing to be aware of are the ski lifts. At the bottom of each race is a small entry for your character to go through. Only one player can go through this bottleneck at a time and if it’s a tight race, you can quickly pull ahead if you are able to just beat out another opponent. There is a delay between each player as they go through, so the difference between first and last place will always be several seconds – a lot in this game. On the final lap, all you have to to is cross the finish line. So, you can take certain corners a little more sharply than you would if you were aiming for the ski lift entrance.

So, between stunts, laps, ski lifts, weapons fire, items, coins, and opponents, a lot happens in each race. That doesn’t even go into the various obstacles you encounter in the course itself which include trees, pits, thin lines, sharp corners, alternative routs, quicksand (?), and spinning cups (???). Most of the time, there is something happening in each race.

If you finish first in all of the courses, you’ll earn a pass. The first pass is bronze, the second one is silver, and the gold pass unlocks the final course. Know that while the first few courses are not too bad, the last several unlockable courses feature some seriously challenging courses and more difficult opponents. You will definitely be challenged even if you’ve gotten used to how things work in this game.

I really like the high amounts of action you can encounter in this game. With a lot to take in, you’ll never get bored. A bit of your success does depend on luck – especially towards the end. Still, it’s a whole lot of run.

One thing I didn’t like was how finicky landing tricks can be. Sometimes, it looks like I’m completely upright as I land, but then I find myself wiping out anyway. This proves to be a minor irritant for me in this game.

Generally speaking, this game is still quite fun even if there is a light sense of limited control.

Graphically, the game was impressive for a console game of its time. There is a huge variety of things to see on the courses including giant snowmen, sparkling fireworks, crowds, desert sands, rivers, highway streets, grassy areas, tunnels, and a whole lot more. There is even a sort of unique artistic style to these characters as well which gives a nice comic book feel to it. The effects thrown in only add to this. The game is also nice and smooth. Very few games tops the graphics quality of this game. So, a very good job on this front.

The music was very nicely done. My only criticism was the music can, at times, be a bit on the repetitive side, but beyond that, the music was very enjoyable. The sound effects were really well done and really punctuates the “kids” side of this game. Great stuff here.

Overall, this is definitely a great game to play. While tricks can be a bit finicky at times and the controls can take some getting used to, this game only gets better from there. With a huge variety of weapons, items, obstacles, and, well, overall action, this game is stays interesting almost every second you play. The challenge courses add a little extra to the gameplay which is quite interesting. The graphics are very nicely done – especially given the variety of courses you play on. The audio is great even though there is a small sense of repetition in the music between tracks. Overall, this is definitely a highly recommended game.

Overall
Furthest point in game: Beat the game and got every board except Special 2.