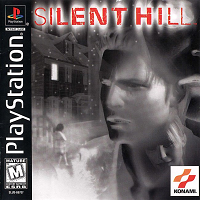 This is our first review of a game released on the Playstation (sometimes referred to as PSX). We take a look at the survival horror game “Silent Hill” – the game that launched an entire series.

Released in 1999, Silent Hill ultimately became the first in a long series of games. Like the rest of the series that followed, the game is mostly based around a town called “Silent Hill”. The town was in development to become a tourist destination only to gradually fall into a dark cloud of mysterious evil that is only loosely explained as the game develops.

The game starts off with the main character “Harry” who crashes his car while driving to the town. When he wakes up, he realizes that his daughter, Cheryl, is missing and he spends the rest of the game trying to chase after her. Harry ultimately meats up with Cybil, a police officer who is investigating what’s going on with the town only to find out that the roads going in and out of town have been blocked.

The player quickly realizes that Silent Hill is effectively a ghost town filled with various zombie-like monsters. Armed with a few weapons and a radio that alerts the player when a monster is near, Harry sets out to solve many of the puzzle’s that is stopping him from finding Cheryl. Throughout the game, Harry slips from a reality where everything seems eerily quiet to a “nightmare” world filled with blood soaked rusted metal and darkness.

The game emphasizes horror in every way imaginable. Between the menacing music played when confronted by some monsters in an environment that is otherwise mostly ambient and the intimidating atmospheres, the game is a continuing atmosphere of creepiness that includes riding an elevator to a floor that doesn’t exist and walls and floors that keep changing on you as you progress.

Another element is that your actions can affect the outcome once you beat the game. You can get a “bad” ending. You can get a “good” ending. It all depends on how many objectives you complete – mostly in the latter portions of the game.

This game is one of those games that has it’s pros and cons. The pro is that this game achieves a lot of levels of horror and creepiness that you’d expect just by seeing the intro. The cons include difficulty in navigation and awkward controls at times.

One of the elements of this game is the fact that it re-imagines what a third person perspective game can do. Instead of sticking the camera behind the main characters head the whole time, it actually moves the camera around to achieve maximum creepiness. The most successful implementation of this, to me, was the first back alley. The camera moves from fixed location to fixed location twisting and tilting as the character moves through the alleyway. A few bad implementations is when Harry is running through the streets and the camera is to his side facing the buildings. Sometimes, the camera even faces the main character as you are trying to evade some of the monsters, making escape even more difficult. While I can appreciate trying to make this game creepy with this, this is more frustrating than creepy as proper game mechanics is sacrificed for cinematics.

The controls are sometimes clunky at times. It takes three buttons just to fire a gun. Sometimes, movement is affected by the camera orientation. An example of this is the diner scene when Harry confronts the first flying monster. Depending on where Harry is, sometimes, up is actually moving Harry to one direction other than forwards. This increased the difficulty of the scene because the player has to re-orientate themselves in various ways just to figure out which direction Harry will actually run.

Another pitfall is some of the puzzles. While many of the puzzles offer some challenge that keeps it interesting (such as piecing together a solution in the hospital), other puzzles were just frustratingly difficult such as the piano puzzle in the school. The only hint I could ever actually figure out with that puzzle was the bit about “tongues without voices” being related to keys that don’t play notes. That was only after I looked up a guide on it and I found the solution. Only then did the hint make some sense to me.

The graphics were decent. While it’s easy to forgive the pixelatedness due to the era it was released, many Nintendo games were leaps and bounds ahead of the graphics displayed here such as Beetle Adventure Racing and Legend of Zelda: Ocarina of Time. If you wanted to play this game for any jaw dropping graphics of the time, you’ll be disappointed. That’s not to say the graphics were terrible, but there are better out there by this time.

The audio of this game was decent. Most of the music played into the atmospherics of the game between the drone sounds in the more uneventful parts of the game and the banging of metal and breathing in the more action-filled portions of the game. I can appreciate the core part of the theme song, but the Italian influence in it kind of made me want to try and shut off the song as quickly as possible. A some of the music was good, but not something I’d listen to on a regular basis. It’s best in small doses more than anything else.

Overall, I’d say this was a good game. It is fairly groundbreaking for its emerging genre. It was an interesting game to play, but not a game I would jump up and down and play over and over again. A good way to kill a few hours and give yourself a series of puzzles to figure out. If it relied less on cinematics and more on game play, that would’ve gone a long way to making this game great.

Overall
Furthest point in game: Beat twice with some assistance of a guide. First win, I got the bad ending. Second win, I got the good plus ending. Thought about playing again to see if I could get the UFO ending, but lost interest.