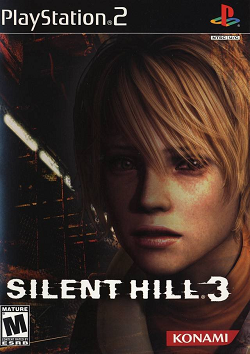 In this review, we try the survival horror game Silent Hill 3. We find out how much this game contributes to the series.

The plot centers around the main protagonist, Heather. She meets a detective who claims he has information about her birth, but she ultimately evades him while trying to go home. In the process of her evasion, she meets the main antagonist, Claudia. The plot gradually unfurls from there – many plot points referencing the first Silent Hill game.

A lot of what is seen in the previous Silent Hill games appear in this game. There is the dark settings that flip to a nightmare version of the same setting. There are the different health items including the health drink (recovers some health), health kits (recovers a fair amount of health), and ampoule items (which recovers all health). There are the usual two types of weapons: melee and guns. While the lead pipe makes a return, the katana sword is definitely new. The handgun is new, but the submachine gun is also a new weapon. So, there’s a mixture of old and new which is interesting.

A feature that is carried over from the previous Silent Hill game is the ability to adjust the difficulty of certain elements of the game. You can adjust the difficulty of fighting and the riddle difficulties. This is in relation to two of the major elements in the game: puzzle solving and fighting. You’ll encounter monsters (a whole different set from the previous two games I might add) which you can take down along the way (or run around them, the choice is yours). Difficulty dictates how hard these encounters can be. There are also puzzles you’ll need to solve in order to advance through the game. The difficulty settings allows you to set how challenging you want those puzzles to be. The easiest setting goes so far as to outright remove some of the puzzles altogether, so if puzzle solving is not something you’re good at (and you haven’t even tried the Silent Hill series before, you can select this setting). Since I’ve already been playing with normal difficulty settings previously, I decided to try easy to see how much easier a Silent Hill game was.

One criticism I have heard off and on is that there are so many doors that cannot be opened. While I can see why this is a criticism, I think it’s better to have the illusion of a larger game than actually having all those rooms be playable spaces. The reason for this is that if there were that many rooms that are accessible, yet there are the same number of items and places to go, you increase the amount of useless space there is in this game. This is what I encountered, more or less, while playing Banjo Tooie where there was a whole lot of useless dead space which made that game much more tedious. So, I’m actually glad there was less space to explore because of it. Otherwise, I might have simply given up part way through trying to figure out what I needed to do next much like what I did before completing Banjo Tooie.

Another criticism I read was that this game was short and could be beaten in a handful of hours. I think this criticism was somewhat taken out of context as I didn’t read that as you can beat this game in a short period of time. Instead, I think it was a reference to the possibility to speed run through this game. That, in and of itself, was a sort of useless comment because if you are able to speed run through the game, you’ve probably already played through this game a couple of times. To dispel any question if this was a short game or not, I would say this game is not short. My initial run through of this game took me just over 6 hours to complete – and believe me, there was plenty to experience in this game in those six hours. Even if you think 6 hours is short, it certainly doesn’t feel like it when you play this game.

A criticism I do agree with in this game is the lousy camera. I was kind of hoping this would have been fixed by the time we’ve reached this third game, but there are only minor improvements. Sometimes, you find yourself running down a hallway hoping you don’t run into an attacking enemy. All you see is your characters face as you run down a hallway. While interesting from a cinematic perspective, it’s absolutely terrible from a gameplay perspective because you need to see where you are going. Sometimes, you are able to “fix” the camera by working your character up and down the hallway in question, but it isn’t always possible to pop the camera back behind your character so you can see where you are going. To me, that is the biggest problem for this game.

Another problem I found with this game is the half useless health indicator. Yes, I get that blue is good, yellow is not as good and red is really bad, but that’s all you get: a small handful of colors. While I can understand the need to be different in a game, I think that the color system was more of a weak spot in this game than a unique feature.

I think the inventory screen was decently put together. The items are split between weapons, supplies, and items. This definitely saved a fair amount of scrolling unlike previous games. So that element gets a thumbs up from me.

The mapping system is largely unchanged from the previous game, though the final map was definitely creative.

Another element in this game that makes a return is the ability to play through the game in an effort to experience the different endings of this game. I thought this game was interesting enough to allow me to feel compelled to try playing through this game. Even without the other endings, I would be interested in trying a different difficulty setting to see how things change around as a result of, say, a different riddle difficulty. So, there is some replay value here – not to mention an interesting incentive to do so.

One final criticism I’ve read about this game that I wouldn’t mind commenting on is the fact that there wasn’t a whole lot in terms of innovation. While there are certainly similarities to the previous game, I thought there was a small amount of innovation in this game. The protagonist alone being female made things interesting. The writing of the different messages you’ll encounter was also different from previous games. Personally, I don’t think there are enough games in the series at this point to warrant a need for anything drastically different. If you want a series that needs this kind of innovation, try the original NES Mega Man series. In Mega Man 2, the formula in that game is exciting and original. By Mega Man 5, the formula is dull and boring. If this game didn’t change drastically by the 5th game, then there might be a case, but not by the third game. So, I disagree with the assertion that this game needs some innovation to keep things interesting.

Overall, this game was fairly good. I got what I was hoping this series is able to deliver. If you can stomach the horror elements in this game, this has a fair amount of entertainment value.

Graphically, this game does feature some improvements over the previous game. There are rooms with dynamic textures that adds a lot to the overall horror atmosphere. The room with the wall-sized mirror in the nightmare hospital where the walls gradually get darker is one such example. I thought that the models were definitely improved overall as well. The settings were also improved with more objects. One criticism is that the game does rely heavily on pre-rendered cinematic scenes because the models in them are far more dynamic than the playable models. While not the greatest game out there in this department by this time, it wasn’t bad either.

The audio was interesting in that some of the sound effects (i.e. picking up items) has remained largely unchanged. I don’t think it really needs a change either. The sound effects were nicely done as they added a lot to the overall atmosphere. The music in game was nicely done, though I don’t see much potential outside of the game. Overall, the sound was good.

Generally speaking, this game was good all around. There’s enough replay value here to warrant trying the game again under different circumstances. The game was a good length. The camera is a lingering problem from the previous games and it continues to really hamper the overall enjoyability of this game. The inventory had a borderline useless health indicator, but the items were nicely organized. The game had interesting puzzles even on the easy setting and there was an interesting amount of combat as well. The game had a good blend of both. The graphics were pretty good and the audio was also pretty good. Overall, I would say there’s plenty to enjoy in this game.

Furthest point in game: Beat the game with easy settings. Got normal ending.