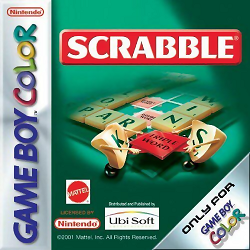 In this review, we put our vocabulary to the test in the Game Boy Color game Scrabble. We find out how well this board game plays.

This game was released in 2001. We have played this game before on the Game boy Advance. It was part of a three game package. That game ended up being barely passable. So, we thought we’d try this version to see if it is any better.

The game follows the rules of Scrabble. You can play a solitary game or take on up to three additional computer opponents. A few other options available is a selection of which track you want to play throughout the game. Once you’ve selected it, you are stuck with it for the match. Additionally, you can play a single game or a multi-round game.

If you are playing a game with an opponent, tiles are drawn. The higher the value of the tile, the earlier in the order you can play.

In the game itself, you get a set number of tiles to start with. The objective is to earn points with the tiles. There is a certain trade-off with the tiles. While it is much easier to come up with words with more common letters, less common letters earn you more points. After the first word is set, every word must connect with tiles already on the board. The result is that the field will look like an answered crossword puzzle.

There are a number of ways you can score more points. The most obvious way is to make words as long as possible. The net side effect is that there are more options to work with on the board with these long words.

A particularly tricky method is to make up multiple words in the same turn. This can get very tricky because you have to make every sure every new word that gets spelled out a valid word found in the Scrabble dictionary. This includes two letter words. Every tile that spells out a new word grants you points. If an invalid word is found on the board, you have your tiles returned and you miss your turn.

If you ever get particularly stuck with the letters you have, you are permitted to completely replace your letters. The problem is that you can only do so once per match. So, you really need to plan out exactly when is the opportune time to do so if you ever do so in the first place.

At the end of the match, all points are tallied. It’s possible to gain additional points, but also possible to get penalized. While we aren’t familiar with what causes either a bonus or a penalty, the game does seemingly take care of that. The person with the most points wins.

When playing a solitary game, your strategies might shift a little. Instead of trying to mess your opponents up, the goal is to give you the most possible chances to score big as possible. The thing to remember is that you get to play with the entire tile set. This includes plenty of common letters, but also every awkward letter in the set. This includes a “Q”, “Z”, and “X”. While worth a lot of points each, trying to spell out words with those letters can be irritating – especially if you are close to the end of the round. One strategy is to use those letters up quickly so you only have decent letters to work with after.

One thing I thought when going into this is that I have a fairly strong vocabulary. While I’m certain that this is a helpful thing to have in a game like this, I still found myself struggling at times. IN multi-player matches, I could only routinely beat the novice difficulty. I can generally keep up with the easy difficulty, though I could never defeat those opponents. Curiously, the medium difficulty wasn’t that much harder and I could at least keep up with those opponents as well. The difficulty of this game is much harder then I thought it would be.

One thing I wish this game had was more options. Some games that are based on actual board games had ways of re0inventing themselves. A great example of this is Boggle Plus. If there were re-imagined options, this game might be more exciting than it already is.

This fact is especially true given that when this game was released, Game Boy Advance games are already hitting the market. These games include Super Mario Advance, Tetris Worlds and Super Bust A Move. So, this game has to squeeze every last bit of console power to stand out in the face of competition from a superior handheld system. Unfortunately, this game doesn’t really do this. As a result, justifying this game is a much taller order.

Still, this game is good at pushing your vocabulary skills. It does bring forth a rather authentic Scrabble experience. So, the core game itself is pretty well realized.

Generally speaking, this game is facing competition from superior systems. Because it doesn’t really push any boundaries with such limited gameplay options, it’s hard to really say this game is worth trying when the competition is ramping up so much. The game does deliver a core experience that is authentic, but doesn’t otherwise push any boundaries. To make matters worse, the difficulty can be very offputting to players newer to such a game. As a result, this game ends up being a bit of a dud for me.

The graphics is arguably where this game shines the most. Each computer player difficulty has their own portrait. Not only this, they also have their own facial expressions that animate while the computer thinks. This adds a nice amount of personality to the game. The effects of the scoring and moving tiles also works well in this game. The menu’s could have been better and the drawing tiles part isn’t the most glamorous part of the game. Still, I can say there are areas where this game does deserve compliments as far as graphics are concerned.

The audio is passable. It’s hard to expect much in terms of sound effects, so I’ll say it’s decent enough. The music is not bad, but nothing huge. At least you get a selection to choose from in the first place.

Overall, the difficulty is the first noticeable thing in this game. As a result, the game does stumble out of the gate. The core foundation of this game is very solid, but it would have been nice to see some innovation built into this game. Things are more problematic for this game since Game Boy advance games are already hitting the market by now. So, gameplay can be a little plain compared to other games already available on the market. The graphics are pretty good, but the audio is only passable. While a decent game, there’s plenty out there that are better by now.