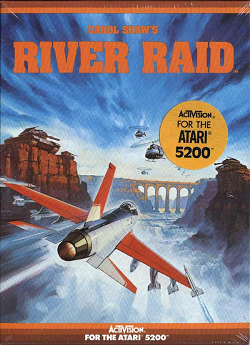 In this review, we decide to wing it in the Atari 5200 game River Raid. We find out if it’s worth playing this top down shooter.

This game was released in 1983. Previously, we reviewed the Atari 2600 version and found it to be a great game. Naturally, we are curious to see if this game can perform just as well.

Since this game is very similar to the Atari 2600 version, this review will focus on the differences between the two versions.

One interesting change is the increase in enemies found on screen. There are now hot air balloons and tanks to contend with. The hot air balloons operate like a slightly slower enemy, but it is smaller, so therefore, harder to hit.

The tanks, meanwhile appear on the land portion of the screen. Your first encounter is at the bottleneck at a bridge. If you get shot here, it’ll still count as a pass and you’ll respawn after. With a certain degree of maneuvering, however, you’ll be able to evade the shot. After this, these tanks will appear randomly on the shore. While you do see tanks towards the beginning, non of them will really be firing at you and merely operate as foreshadowing to what you’ll encounter.

The land generating is also improved. Some turns are much user to move around in. This is unlike the 2600 version where slowing down is mandatory on sharper turns. In addition, the later levels feature more diverse land formations such as extremely narrow passageways to make survival even more challenging.

Generally speaking, this version features a number of improvements to make the game even more interesting. In some respects, it is easier thanks to the more sensible land formations it generates. In other aspects, it is more difficult with the inclusion of more enemies.

With the increased power in the system, the graphics are also improved. Everything is less blocky. Probably the only complaints I have here are how the ships and jets are drawn as they seem very basic now.

The sound effects are OK, but by this time in history, I’ve heard better on this system. No real music to speak of.

Overall, there are a number of improvements to this game. Better land generation and more enemies make this game that much more compelling. A lot of the graphics have been improved, though it would have been nice to see a better rendering of boats and the jets. The sound effects are OK, but nothing huge and there’s no real music to speak of in this game. Still, this game is still worth checking out as it features plenty of entertainment.