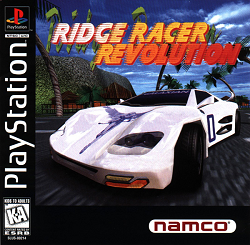 In this review, we rev our engines for the racing game Ridge Racer Revolution. We find out if this Playstation game is worth playing again.

This game was released in 1996, and is the console sequel to the game, Ridge Racer.

When you start the game, you get treated to a pre-loading game called Galaga ’88. If you destroy every enemy, you unlock several additional cars to race with.

When you get into the actual game itself, you’ll get a choice of three tracks: beginner, intermediate, and expert. Each of these tracks are ultimately one track with different routs of increasing difficulty.

If you are like most players, you’ll also have a choice of four different cars. One car has decent stats all around. The second car has excellent grip and handling. The third car has great acceleration. The final car has excellent top speed.

After you have selected the track and car, you are are set to try and beat the races. You only have two outcomes – either you finish 1st and get the victory wreath, or you need to race again. Only 1st place will do in this game.

If you manage to beat all three tracks, you’ll unlock the more difficult reverse versions of the initial three tracks.

One racing style that apparently works very well is to gun it for as much of the track as possible. For the sharper turns, accelerating while breaking will prevent spinouts while also enabling you to make the corner without banging into the wall. Each time you hit the wall, you lose speed. It is possible to even be forced to shift down in the process of hitting the wall. Regardless, the fewer the hits during the race, the better.

In the standard 12 race car mode, you’ll also get to race against about a dozen opponents. It’s possible to rear end their cars which will cause you to lose speed. It’s also possible for opponents you’ve passed to rear end you (which seems to be referred to as a “block” in this game). This marginally increases your speed, but little else.

To make matters interesting, there is also the time limit. You get a maximum of 99 seconds. In order to feed the timer, you need to either complete a lap or pass through a checkpoint. If you run out of time, you lose the race regardless of position. The timer really only comes into play in the intermediate reverse and expert reverse tracks, though, so you won’t need to sweat too much over that factor.

One feature that is an improvement is the inclusion of a rear-view mirror. This allows you to see if you have much of a lead on an opponent or even block opponents attempting to pass you. It does make things more interesting.

Another feature that is an improvement over the prequel is the increase in actual race track. The alternate routs in the tracks have much bigger variety than the prequel. Unfortunately for this game, there is increased comptetition from other consoles. In the same year, games like Cruis’N USA and Wave Race 64 were out and they boasted a far greater amount of content (way more than one race track). So, while the content is an improvement from the prequel, this game gets completely left in the dust from other console games at the time.

This game, as a direct result of having only a single track, suffers from the exact same problem as the prequel – lasting appeal. There’s very little content and you can get enough out of the game in a single afternoon easily. Once you’ve beaten those tracks, there is very little reason for players to go back and race them again because by the time they have beaten those tracks and the reverse versions, they’ll probably be sick of racing those tracks because of the frustration of beating them in the first place.

Generally speaking, this game series may have had advantages when it was first out of the gate, those advantages have evaporated by the time this sequel came out. It’s like the developers didn’t see increased competition coming and figured that the copied formula would work great – to which it didn’t. One race track games may have been a stretch to be satisfactory a year or so earlier, but now, it is borderline pointless to play such games by this time.

Graphically speaking, this game doesn’t really improve on the graphics of its predecessor all that much. As a result, the graphics seem dated compared to N64 counterparts released at the time. The only thing this game can boast is the fact that the cars are actually 3D, but other games have accomplished this by now. The last remaining feature is the constant change between day and night, but that is pretty much a last hurrah that this game accomplished already from its prequel. The graphics were OK, but nothing huge.

The audio was nothing huge either. Some of the music was carried over from the previous Playstation Ridge Racer game. It still has the acid sound which may be satisfactory for a game of its time, not exactly memorable despite its somewhat unique sound. The announcer was OK, but flip flops between being supportive and making fun of your racing performance. The sound effects after OK, but nothing huge over the previous game.

Overall, this game changed little from its previous formula. Because of increased competition from other console games, this game suffers by quite a bit. The game is incredibly short with its 1 track, three rout system. It can be played enough over the span of an afternoon while giving players little reason to replay any of it. The graphics displayed here may have been a novelty a year earlier, but it’s nothing special by now outside of the shifting of day to night and night to day. The audio was passable with the announcer and music, but nothing really stood out to make it particularly special. As a result, I would recommend passing over this one.