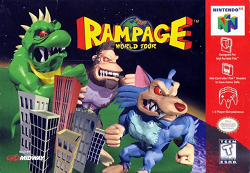 In this review, we get ready to take out whole cities in the N64 game Rampage World Tour. We find out how well this action game plays.

This game was released in 1998 and is a port from an arcade game.

We are starting to get a small amount of familiarity with this franchise. We previously reviewed the first game Rampage on the Atari 2600 and found the game to be horrible. This was followed up by the Atari 7800 version which was, while better, barely passable. Since we seem to be on a positive trajectory, we thought we’d give this sequel a try.

Like the previous game, you play one of three main characters. These are Lizzy the giant lizard, George the gorilla, and Ralph the rat. These monsters were formerly humans who have been turned into monsters by Scum Labs. Because of an accident, they have been released and are on a mission to wipe Scum Labs of the fac of the earth. Dr. Elizabeth Veronica, one of the Scum Labs employees, follows them around trying to come up with a plan to stop them.

Some items do hurt. Some appliances and poisons will cause your monster to puke and lose health. So, you need to take care what you east when searching the buildings for food in the process of destroying them.

Whats new in this game is the fact that items have been greatly expanded. There are super foods that replenish a greater amount of health. One such super food is, weirdly enough, the lady bug.

You can also obtain power-ups. These power-ups can be activated by C-right. Two of these power-ups are death breath and hot loogie. Death breath causes your monster to scream, destroying anything visible in the direction it is facing. Ho loogie, on the other hand, flings a burning loogie on the ground and causes a pool of napalm to erupt. This destroys any vehicle that happens to be there at the time.

In addition to this, there are World Tour items. There are two ways you can earn a World Tour: through spinning a flag or smashing a World Tour sign. What the World tour item enables you to do is visit another part of the world where a Scum Labs building happens to be located. The goal in the game is to destroy all Scum Lab facilities.

If you beat the level after nabbing the world tour, you’ll fly through a bonus level. This bonus level features various things such as people holding onto large balloons, storm clouds, and more. These items net you bonus points by collecting them. The bombs temporarily disable your controls. There is only so much flying you can do before leaving this level, so earning as many of these bonuses as possible quickly is crucial.

Once you destroy all Scum Lab facilities, you’ll be able to fly into space to take on the last few levels. Beat these levels and win the game.

Returning enemies include helicopters and people with pistols firing at you. This, of course, has been greatly expanded. There are now people with machine guns, people hiding in sewers with rocket launchers, and people who throw dynamite. In the buildings, there are private eyes, a civilian with a shotgun, police that drop time bombs, and several others.

The vehicles have also been expanded to include army trucks, tanks, large robots, punching robots, UFO’s, and even large bouncing aliens if you get far enough.

Free lives were hard to come by in the previous game. This has been solved in a weird way in this game. You do have a limited number of lives, but the total resets after every level (so far as I can tell). This means it is more than possible to make it all the way to the end.

There is also a greater chance at finding food because there are more options. One way is to punch a cargo plane as it flies by. This drops a large box onto the ground. Sometimes the box is empty, but other times, the box contains nesting chickens, cows or sheep. A pretty decent health boost (by this games standards) can be found in inconspicuous tourist traps. This represents 3 groups of people at once.

There are also other groups of people floating around in the game. Some are people hanging around while others are running for whatever reason. In addition to this, there are groups of soldiers who fire shells at you as well as groups of officers firing various weapons at you. All of which will grant you small boosts in health.

The final item of note is the purple radioactive material. On most levels with a Scum Labs building, there are these barrels with radioactive material. If you eat this, you’ll turn into the ultimate monster named “V.E.R.N.”. This purple monster can kill almost any enemy with a single swipe of its claws hands. It can destroy buildings at the fastest rate. It can also fly which means it can take on various enemies and get to places other monsters are unable to get to on the building. Definitely makes the level in question much easier, that’s for sure.

An interesting change from the previous game to this game is the dropping of the newspaper element. Instead of newspaper headlines dropping you hints, you simply get a message between levels that helps with hints. Some of these hints are valuable while others are more amusing. One amusing hint is that when you are in a new city, eat some interesting people (as opposed to meat).

On a final note, there are also smaller bonus levels. You have a limited amount of time to eat as many people as possible. The more people you eat before the time it up, the bigger the bonus points you get.

One thing I really liked about this game doesn’t really appear right away. After a while, you start getting exposed to some of the more subtle bits of humor found throughout the game. A lot of this is found with Veronica talking on the phone with other employees. Nuggets include, “You’re going to have a hard time keeping this quiet.” and, “Tell security to expect a lot more over time!” (to which the person on the other end of the line gives off a confused sound). The rubber ducky item, though useless, is funny when punching it. What this does is break up gameplay that might otherwise be construed as repetitive. While it doesn’t completely take the sting out of it, it does do a good job at tiding the player over.

Another great aspect is the various small amounts of animation in the game itself. The way some people wave in the window alone gives off a certain personality. Other animations like the old guy angrily shaking his cane at you was also pretty funny. There was even the inclusion of little green men for you to eat as well. All this activity really helps give off the impression that you are really in a lively city.

The only problem with this game that I found, and this is something I alluded to earlier, is the repetition in the game. Smashing up buildings can be quite entertaining to a point. After that, it becomes somewhat routine after a while. The game does break things up a little by allowing you to destroy buildings in different ways. This includes jumping and smashing down, punching out the windows, using pepper, using a power-up, and even hijacking the space shuttle to fire laser beams into the buildings. There is still that repetition that eventually seeps through after a while thanks in part to the volume of levels this game provides.

Otherwise this is a surprisingly entertaining game. While past exposure left a bad impression on me, this game does redeem the series by quite a bit. Once you start seeing the subtle humor sprinkled about, this game manages to stay entertaining for numerous hours. The conversations with Veronica, the hints between levels, the bonus levels, and even the changing designs of buildings as you travel the world all do a good job at keeping the game fresh. So, come for the pure carnage, stay for the more subtle bits of humor.

Graphically, this game is definitely a 2D game plunked right in the midst of the 3D revolution of gaming. The animations are pretty well done both in game and in the cut-scenes between. A lot is going on throughout. There is also a decidedly cartoonish style going for it that helps a lot. It’s, unfortunately, not the highest quality in the world. You’d almost thing you could pull off what you see in the SNES. It’s good, but not amazing.

Audio was a pretty big strength in this game. The music is certainly a big hit for me. It works so perfectly in almost every part of the game My only problem is the small library of music. I wish there was more music selection to keep the music from being repetitive. The sound effects, however, were great. The voice-work works well to continue the cartoonish theme. The shrunken voices of the monsters are an unexpected element that works surprisingly well. that certainly earned a thumbs up from me. So, although repetitive, an otherwise great aspect of the game.

Overall, the enjoyment factor depends on how much you notice the smaller things in this game. While the destruction and big monsters is the initial draw, the small things really win out in the end. The small bits of humor, the small animation style, the features; all of this works to make an otherwise repetitive game interesting. It’s unfortunate that the repetitive nature does eventually seep through thanks to the large number of levels. Still, this game took great strides to improve the formula with loads of new features. The graphics may not be amazing, but the audio was very well done. An overall entertaining game.