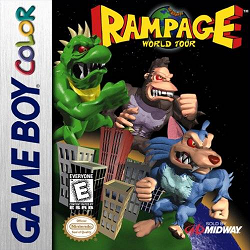 In this review, we level entire cities in the Game Boy Color game Rampage World Tour. We find out how well this Action game plays.

This game was released in 1998. We have some familiarity with this franchise already. Previously, we reviewed Rampage for the Atari 7800. That game didn’t score all that well. We then tried the Atari 2600 game Rampage! Because of the release timing, that game scored especially bad here. finally, we tried Rampage World Tour for the N64. That game scored much better and even got a pretty good score. So, we thought we’d try the Game Boy Color port to see if it can keep improving on itself.

Since this game is so much like the N64 version, we decided to simply note the differences in this version.

One thing that is noticeable is how much more stripped down this game is. While you can play any of the three main characters in the game, the fourth secret character is nowhere to be found. The fourth character in the N64 game can be temporarily played if you eat the nuclear drums – an item that doesn’t even exist in this version.

Another feature that is not present are the crowds of people. Previously, you can eat a bunch of people crowded together all at once for a nice small health boost. Unfortunately, in this game, you can only eat people one at a time.

In addition, the tourist traps where you could replenish a nice sizeable chunk of your health is also removed.

While some of the good things have been removed, a few of the annoying features in the N64 version is also not present. The biggest one is the time limit. If you didn’t level the entire city within an unknown period of time, an air strike would hit the city, damaging you in the process. In this game, that is removed.

One of the bonus levels that involves eating as many people as possible is removed as well. On the bright side, the flying bonus level where you ride the space shuttle while collecting points remains intact. In addition, collecting bombs don’t hurt in this version and, instead, grant you bonus points just like every other item for some weird reason.

The difficulty curve is also steeper in this game. In the previous game, some of the enemies you encounter only appear after a large amount of gameplay. In this game, almost every enemy comes at you within the first 6 days of destruction. This includes walkers, tanks, flame thrower jetpack people, and a few others that can serve to annoy. After this, the difficulty level seems to level out somewhat as if to say that there is nothing else you can expect in the game.

Some of the weapons such as hot loogie have also been stripped out. The only weapon left in the game is death breath. Collect the smiley face and you can use “A” and “B” to activate it three times. In the original N64 game, death breath took out pretty much everything in sight. In this game, death breath only levels buildings. Good for beating levels more quickly, but little else.

Because of the much more stripped down nature of this version, this game ends up being much more repetitive. There’s hardly anything you see on day 30 that you didn’t see on level 20. While the game itself is a surprisingly good rendition of the N64 version in some respects, this version doesn’t quite hit the same mark the N64 version did. chances are, you’ll simply play until you are bored instead of playing to completion. After all, you have unlimited continues.

The graphics are hit and miss. The hits include the semi-3D graphics of your characters. The animations and look are quite well done for a game on this system. The buildings also have a surprisingly level of variety too. The downside is that the background is extremely plain and bland. The people are a little on the flat side, but the vehicles aren’t bad. A decent job, but nothing to get excited over.

The audio is surprisingly weak in this game. When I first started playing, I thought the music I heard was a good rendition of the Tourists track as heard on the N64. The screams, while stripped down, were also nicely done. After a few levels, though, I realized that the only track in this game you get to listen to while playing is the Tourists track. You don’t even get the Wolf or Lizzie tracks to keep up some variety. This only adds to the repetitive nature of this game and is the reason why I’m giving this game a subpar score.

Overall, while some elements translate well from the N64 version to this version, this game is simply a stripped down version of the previous port of this game. Feature after feature that kept some variety up in the N64 version simply doesn’t exist in this game. What you get left with is a repetitive game with unlimited continues. You basically stop playing when you finally get bored of it. There are positives to the graphics, but also a few negatives too. While the graphics are decent, the audio gets boring and repetitive after a while. Not the greatest game I have ever played.