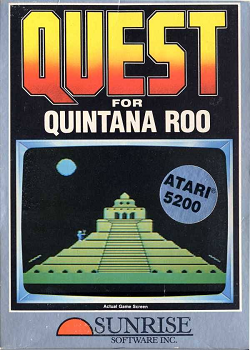 In this review, we excavate our way through the Atari 5200 game Quest for Quintana Roo. We find out how well this adventure game plays.

You play as some kind of archeologist as you take on an Aztec temple filled with Egyptian dangers like venomous snakes and mummies. This, of course makes perfect sense if you ignore the fact that the Egyptians and the Aztecs are located on separate continents, but I digress.

You start outside the grassy temple. Contrary to total logic, you can’t climb the stairs at the middle. Instead, you have to climb the sides of the temple either from the far left or the far right.

Along the way, you’ll encounter two separate dangers on your climb: snakes and the electrified shots that fire down the sides from time to time. If you get bit by a snake anywhere here, you’ll get poisoned and you’ll only have about a minute left to live. If you get bit while climbing the temple, you’ll also fall all the way down to the ground.

The other danger is the laser beams that fire from the top of the temple. They fire at a fixed interval. If you get hit, you’ll get knocked to the ground, but you’ll otherwise be unharmed.

This is where the game goes even more counter-intuitive: what to do if you reach the top or another other part of the temple for that matter. On all the flat surfaces on the way up, you can enter the temple by pressing the duck button. There’s no hint that there is a hole, but there is – even at the top of the temple.

Each hole leads to a separate part of the temple. Inside the temple, you’ll encounter more deadly snakes and even venomous spiders. The good news is that some rooms have herbs that cure poison. The bad news is that the air is stale. You have a limited amount of time while in the temple before you suffocate. If you don’t make it back out of the temple, you sink into the floor because that’s the obvious symptoms of asphyxia. You also lose one of your three lives in the process.

What ever room has in common besides enemies is an escape chute. This is found along the wall. You have to press duck to slide down this chute. One side note is the fact that all timers pause while sliding down.

This is where the game gets confusing yet again, what exactly do you do in these rooms anyway? As it turns out, you have 4 tools that are only accessible while in the temple. They are accessible by the number pad. 1 is your gun. 2 is the vials of acid. 3 is the chisel, though I could never make any use of it. 4 is the Geiger counter which detects objects in the room. The counter is so useful, it only detects objects once you’ve exposed them. 5 drops whatever you have in your hand, allowing you to slide down to the next room.

You can use your gun to shoot snakes and spiders, but you apparently brought one clip, so use this in case of emergencies.

This is where most players think that this is all well and good, but what exactly do you do now? This took a long time for me to figure out as well, but it turns out, you need to use the vials of acid (via 2) to open up secret doors.

All doors are located inside the top wall next to the escape chute. To open up a door, move all the way up to the wall and throw your acid. This will knock down an entire wall and reveal the treasures in that room. Some treasures (such as the Egyptian icon, the vase/bucket, or the bar of gold) are worth points. The most valuable item are the acid vials. You can refill your very limited supple, but rationing them is essential.

Among the rooms is a vault. This vault is hidden behind a secret door like every other item. You’ll know you found it if you uncover the gold large door. Three holes will also appear. These holes are where you stick the colored rocks. Every single time, I found the vault by entering the second to top floor on the right side of the temple. Which floor varies, but it is always in that particular entry point (you’re welcome).

Since you can only carry one stone at a time, you have to try your luck and hope that the color you got is correct. What color and what order is not known. You have to go by trial and error. If you are wrong on a stone, the stone will disappear and you have to go back through the temple to manually locate it again before it back be used a second time. I, for one, never got the correct stone the first time. I always ran out of acid before I could get there.

You’ll also notice that some hidden rooms contain mummies. These mummies are invulnerable to bullets. The only way to defeat them is using vials of acid. Since the acid is so rare, it ends up being against your interest to waste one on them. So, moving about to lure the mummy away is your better option here.

The big problem I have with this game is that the learning curve is excessively steep. Apparently, others have attempted this game and some didn’t even get as far as I got. A lot of the steps are counter-intuitive and confusing.

The second problem I have with this game is the fact that it’s too hard to open the doors. You have all of 6 vials of acid and 42 rooms to explore. This means you have to find a cache of vials at least every six rooms. This means you need to find 7 total at least. Otherwise, you run out. I don’t even think there are 7 caches to begin with. So, getting the doors you need open is largely bent around luck. The best I ever got was three color stones. While you replenish your acid vials after dying, that means you must find 4 other caches after using up every free life in order to get the remaining doors open. Suffice to say, the math is not on the players side.

Even if the player manages to find the colored rocks, the player has a mere 1 in 5 chance of getting the correct rock. After this, it’s a 1 in 4. There are no hints, it is strictly trial and error. So, you are depending on luck after all the counter-intuitive complex and confusing steps. In the end, the difficulty makes this game less than fun.

Generally speaking, there are no shortages of negatives to be had here. The learning curve is steep, the game is difficult, and even if you manage to overcome the learning mountain, success boils down to luck anyway. While I can appreciate the size of the game, that is about one of the only positives there is to be had in this game. Sitting in a room, holding on to a controller and feeling dumbfounded is not my idea of having fun personally.

The graphics are a little on the basic side of things. While everything is decently textured, there is still plenty of single color space throughout the game. The main character is somewhat decently rendered, but glitches when moving around on the grass. Enemies are very basically rendered. So, fairly average graphics.

There are a few jingles in this game, but it’s largely confined to what you hear when you die. The jingle isn’t that well realized. The sound effects are fairly minimal as well. So, not a whole lot to hear in this game.

Overall, this isn’t a game I would recommend. The learning curve is steep, and you end up relying on luck by the end anyway. The game is confusing. While there is quantity to be had here in this game, that’s about all this game has going for it. The graphics are pretty basic and average and the audio leaves a lot to be desired. Not a great game.

Overall
furthest point in game: Found 3 colored rocks and relocated one of them after it disappeared from a failed attempt to guess the code.
High score: 12,800