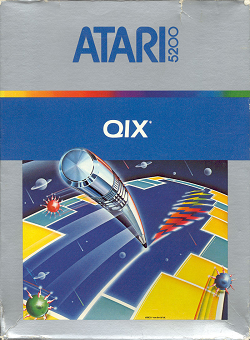 In this review, we square things up in the Atari 5200 game Qix. We find out how this puzzle game plays.

This game was released in 1982. It is a port from an arcade game.

You take control of a pointer or marker in this game. The objective is to draw straight-line objects. If you crate a full shape, the territory that shape covers becomes yours. The lines you draw are apparently called Stix. The goal is to claim at least 65% of all the territory in the field. Any additional territory you claim is considered bonus. The round ends when an object you draw takes you past that threshold.

Of course, the game isn’t that simple. There are a enemies to be had in this game. The main enemy is the Qix. This is the buzzing object that is floating around. It resembles the Windows Marquee screensaver, only with shorter, straighter lines. Any object you draw that doesn’t occupy the space of the Qix is what is claimed.

The Qix can kill you by touching any line you are drawing. If the line already touches taken over territory, then the Qix will bounce harmlessly away into the remaining unclaimed territory. It’s when you are laying down the Stix is when there is a problem. If you have failed to complete an object before the Qix touches that line, you die.

After you draw your first object, there is an additional enemy. This comes in the form of two blinking markers. These markers travel around the perimeter of the territory you have yet to claim. If the marker touches you, you’re dead.

To make a waiting game even more difficult, if you start laying down your Stix and stop for too long, you also die.

If you manage to beat a few levels, the game ramps things up by introducing and additional Qix. While this adds to the complexity, the game throws out an additional challenge for the players. If you happen to create a Stix that separates the two Qix, the round ends and you get a multiplier bonus added to all points you earn from that point on. At first, this is 2x score. If you do it a second time, you earn 3x score. Every additional time you are successful, the multiplier gets added by one. While this is one way to advance through the levels, the real point scorer is winning rounds by claiming enough territory. Still, the bonus helps a lot if you can manage it.

Another thing to remember is that you can use one of the buttons to accelerate. If you are accelerating, you’ll create blue fields. This will net you points and make it easier to avoid getting killed. If you plan on risking more, then don’t use the button. This way, you’ll create brown Stix. If you are successful in creating a shape with the brown Stix, the territory you claim will turn brown. This enables you to score even bigger points.

Still, the general idea of this game is risk and reward. Creating massive objects will net you huge points. The problem is that you are at a general higher risk of getting killed in the process. Meanwhile, creating small objects will help you in your quest to stay alive. The downside is that the objects don’t net you much in the way of points. How much you are willing to risk is purely up to you.

You have five lives to work with. This is shown on the upper right hand corner. There isn’t a number telling you how many lives you have, but rather, 5 boxes with the life you are on highlighted. An interestingly different way to display this to say the least.

Despite the games simplicity, it’s more than possible to formulate some interesting strategies. One strategy I ended up formulating was to create cavities in the playing field. To do so, I try and make a make-shift cross-hairs symbol in the playing field. Accuracy isn’t a huge deal. All I am after is creating four unclaimed chunks of territory with a bottleneck somewhere. Another method is to gradually make the unclaimed territory long and thin. This has the same net effect, but is a little more difficult to pull off.

This bottleneck serves two purposes. For one, it makes it easier to travel through the middle of the playing field with minimal time. For another, it opens up the possibility of dividing the Qix. Best case scenario is that you get your multiplier. Worst case scenario, you easily take over a huge chunk of territory with shorter Stix. It ends up being a win win situation. Still, this was just what I ended up coming up with. There are plenty of strategies people and employ.

One thing I will say about this game is that this looks far less fun than it really is. I honestly saw screenshots of the gameplay itself and didn’t think this game was going to be all that great. I mean, drawing boxes? How could that even be fun. Yet, people say this was a great game, so I worried this was going to be another highly overrated game.

Yet, when I actually sat down to play it, I was genuinely surprised at how good it really was. I started playing this one and thought I would be done in about a half an hour. Two hours later, I found myself doing a double take on the clock. It was probably the longest session I spent on an Atari game in a long time – if ever. It is surprisingly addicting.

This game isn’t without it’s flaws. The biggest one is how the game distinguishes between player controlled space and uncontrolled space. Sometimes, it’s possible to accidentally wander out into unclaimed territory by a pixel or two. Without knowing it, you can stop and suddenly just die while you are waiting for your next attempt to claim territory. This means you have to carefully watch which pixel you are on when rounding corners in peninsulas.

Despite that, the game is very simple to understand. The bonus system is also spelled out to you when you get there. So, understanding the game itself is a very easy thing to do.

Graphics are where the remaining problem lies. The good news is that the pixels are fairly large and can be seen without much squinting. The bad news is that the enemy markers are next to impossible to see. With a flicker rate so low, it’s almost impossible to see via peripheral vision as you are staring into black areas. Instead, you have to resort to occasionally scanning the perimeter to see if they are approaching. The good news is that the movement is predictable, but that’s about it. It’s hard to fault this game on anything else because it’s hard to see what else this game could possible need in this area.

The sound is decent enough. The buzzing of the Qix really helps give the impression of danger. It’s almost as if the Qix are electric and you are trying to avoid being electrocuted. The death sound is nicely done and the beeping sounds between levels are pretty good. No music to be had here, unfortunately.

Overall, this game really doesn’t look all that interesting on first blush. However, once you actually play it for yourself, this game is not only surprisingly good, but also surprisingly addicting. The learning curve of this game is close to non-existent and you are able to develop your own style of play as you learn the basics. All of this is in spite of the seemingly simplistic play. It’s not perfect because you can accidentally kill yourself by wandering out into the open play field easily. The enemy markers are very difficult to see. Still, the audio was decent enough in spite of no music. An overall great game to play.

Overall
Furthest point in game: High Score: 108,070 (approximately because it doesn’t take long for this to disappear)