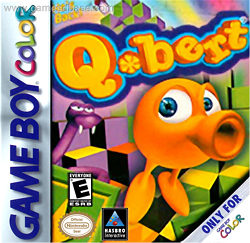 In this review, colors get changed in the Game Boy Color Game Q-Bert. We find out how well this puzzle game plays.

Since a lot of this game plays like the Atari 5200 version, we thought this review should focus on the differences between the two games.

The first noticeable difference is the ability to insert your name into the game (three letters maximum). This makes things more convenient in that if you get the top score in the game, then later find yourself getting into the hall of fame again, you don’t have to constantly re-enter your name. An improvement to say the least.

Another difference is the choice between adventure and arcade mode. Arcade mode is the version of the game that more closely resembles the classic game (complete with the pyramid design in the first level and all the characters found in the older version).

Even then, later level designs gradually evolve. The game will drift further away from the pyramid design and throw in other shapes for the level at you. While purists might not like it, this does give the game some much needed variety that is rather lacking in the classic version. Still, the difficulty ramps up in the same way.

In Adventure mode, levels are split into groups called “dimensions”. Beat a dimension and you’ll get a quick picture before advancing to the next one. What is also new is the teleporter blocks. These blocks look like a normal block, only with a hole in the middle. If you jump on that one, you’ll teleport to another part of the level. While this may make things a little more confusing, there is an indicator on the bottom left corner. One number represents the number of blocks left in total for the level while other on indicates how many blocks are left to change on the area you are on. This can help you keep track of your progress. Do note that this is not to be confused with the disc teleports which are still found off to the side of the level and act like they always do.

A third difference is the fact that the screen is much more limited. Even in the classic pyramid layout, the screen needs to move around. This is an unfortunate limitation in the game because the view is somewhat limited. Throw in the banner that appears and disappears depending on where you are at and it’s difficult to see past two rows down. This makes level memorization an asset.

One final difference is the fact that there are continues in this game. If you lose all of your lives, you can continue where you left off. The downside is that your score will reset and you have to start the level all over again from the beginning.

One thing I will say is that adventure mode could have been much more “adventure” like. What I mean is an actual storyline of some sort. It doesn’t have to be dramatic or thought provoking. All it needs is something to tie the levels together. As it stands now, all I saw was the naming of characters.

While a lot has been retained from the classic game, there’s still precious little put into the game that makes it stand out from other games. The only thing that has been seemingly added are a couple of characters and the use of the warp function and tweaking of the banner. After that, the levels are merely re-shaped. Nothing much is really added to the game. While people who have played this game in the past might be happy with this one, it makes the game less approachable for new players.

Since the game is so much like the original, the simplistic style of play is also present. While this may be fine back in the Atari days, it doesn’t pass that much muster now. Why play a throwback game that you can finish in about an hour or so when you can play games that you can spend an entire day on? While there is some replay value to be had here, even that wears out after a while.

Generally speaking, the gameplay is somewhat outdated because so little was added to the game. What was added amounts to simple tweaks to the overall game and nothing totally overarching or particularly inventive. The game is short and, while there is some replay value, that eventually wears out as well. So, nothing really exciting in the game itself.

The graphics are largely retained from the previous versions. While the cubes have had some added detailing done to them, the background remains that stark black background with nothing to see. The only real positive is that the characters have been given a 3D treatment for slide shows and menus (down-converted for the system of course). While that adds some flare to the game, there really is nothing else that is exciting to see in the game.

The menu music in the beginning showed promise, but once you get into the game itself, all you have keeping you company are the standard sound effects. The sound effects themselves aren’t bad, but with no music to keep things going, this game simply fails to impress on this front.

Overall, this game was a letdown. While players familiar with this game from the Atari days may be happy with this one, newer players may not get all that excited for it. This is because the gameplay is dated by the standards of the time. It is also very short. While the replay value is present, even that can only go so far before the game runs out of entertainment value. The graphics are below standard and the audio is unimpressive. Not a particularly thrilling game.