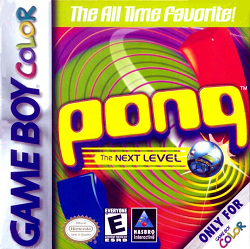 In this review, we test our paddle skills in the Game Boy Color game Pong: The Next Level. We find out how well this action game plays.

This game was released in 1999. Many people consider Pong to be one of the most iconic games early on in video game history. So, it is with interest that we try at least one version of this game.

When you first fire up the game, you’ll eventually get a menu of different options. The bottom option allows you to change the difficulty between easy, medium, and hard. By default, you get to start off with the easy setting.

Another option allows you to turn the music on and off.

The rest of the options involve which game you wish to play. The first game is the Classic game. This game features the classic set-up to Pong including black and white graphics and very basic graphics. In short, it is the single most stripped down version of this game. It is the only one without power-ups or features that affects the ball trajectory (outside of the two paddles of course).

The next game available is Jungle. The level features rollers in the middle that randomly turn on and can move in either direction. This affects ball speed as the ball passes over them.

The third game is the Ice level. On this level, two penguins will randomly wander back and forth in the middle of the field If you hit a penguin (or both for that matter), the ball will change vertical direction. Hitting the penguins will not affect horizontal movement. Another feature in this level is that, after a while, the penguins may release an additional ball onto the field. The maximum number seems to be two, but it’s rare that both balls stay in play for very long. Regardless, if you have any ball scored on you, it counts as a point. This can lead to some very frantic play at times.

The fourth game is the soccer game. This is probably the most varied game of the four. Instead of one paddle, you get to control two at the same time. One paddle is basically your goalie while the other paddle is the striker. The ball can pass through the striker paddle if it is going in the direction of the goal. Another feature is the fact that goal-posts are included, so you need to concentrate on getting the ball between the posts.

The goal for each game is to reach 11 points. If your opponent is at 10 points, then the winner will get a lead of two (a bit like the rules in volleyball, actually).

One feature in most of these levels (classic arena is the exception here) is the ability to obtain power-ups. The power-up will move around the middle of the arena. If the ball hits the power-up, the power-up is awarded to the player that last touched the ball. There are just two possible power-ups you can obtain.

The other power-up is the glove-like power-up. In this case, your paddle will curve somewhat. If you touch the ball, you can “catch” it and then press a button to release it. This can give you more control of the ball and give you an advantage over your opponent.

A feature that every game has in common is the ability to “spin” the ball. While you can hit the ball normally by just blocking the balls path, this will lead to a very predictable trajectory towards your opponent. If you “spin” the ball, the ball will behave differently and move in a slightly different path. To spin the ball, make sure your paddle is moving when the ball comes into contact with your paddle. The direction determines the balls path. The advantage this gives you is that it makes it more difficult for your opponent to return the ball, possibly granting you an additional point.

One thing other players have noted is the easy difficulty. I can agree with this assessment because I can very easily beat both the easy and medium opponents. That doesn’t mean this game is unable to challenge you. The hard difficulty can make things challenging on the ice and soccer levels. The problem here is that the only challenge this game offers is found on a very select few levels. Even then, it is more than possible to defeat your opponent. It took me a few tries to beat the last two levels and tournament, but I did manage it.

One thing I will say is that this is one of those throwback games that tries to bring this game to new players. Some games fall flat on their face because they change nothing. Other games become barely recognizable because too much has changed. In this case, this game manages to strike a very nice balance between the two extremes. You can play the classic version and get that Pong experience you know about from way back in the day. In addition, this game offers features that helps bring this game forward onto the handheld. I thought this game balances things out very nicely.

The length, for me, is a little on the short side, but nothing that I can really penalize it for. It might have been nice to see more than four levels, but the four levels to offer a fair bit of variety anyway.

I think that one aspect of this game that does hurt things a little is the simplicity of the game. While it’s great that it’s a very easy to learn game, I find that it’s a little tricky to really feel fulfilled playing this game. There are some basic features that bring this forward, but I’m not sure they are enough to really make this a well-rounded game. Maybe other unique levels will help things here.

Another aspect of this game that I find particularly odd is the hall of fame. It calculates the total points you earned in a game and allows you to enter your name on there. Because of the way it works, it only rewards very close matches and not necessarily skill. It’s probably a feature that could have been left out if you ask me.

Still, I can really get that sense of addictive play that made Pong such a big success from way back in the day. I can definitely see myself picking this game up from time to time to give this game another spin.

Generally speaking, this is a good more modern take on an old classic. It allows players to play a the classic version while also offering new features that bring it into a more modern time. It may be a little to easy for some players and the simplicity might be a little bit excessive in spite of the features, but there are plenty of things to give a thumbs up to. The addictive nature is there and it is quite straight forward to learn. So, a pretty good game overall.

The graphics are great in this game. The animation sequences add some interesting personality to the game. the different environments are nicely drawn out. There are no graphical slowdowns, flickering, or anything else that would strike me as strange. The color contrast between the ball and the jungle could have been better, but that is probably the only real complaint I have of this game.

The audio isn’t bad. The music is nicely varied, though nothing I can say is particularly memorable. The sound effects aren’t bad either. So, a decent job here.

Overall, this is one of those games that takes a classic and puts a modern twist on this. These throwback games can be done well or not. In this case, I would say this is done well. This game has a nicely addictive nature to it. The simplicity might lean towards excessive, the hall of fame feature might be a little senseless, and the difficulty might be a little on the easy side, but it’s still a pretty solid game. The graphics are well done and the sound is certainly passable. An overall good game.

Overall
Furthest point in game: Beat the computer opponent in every level on all difficulties.