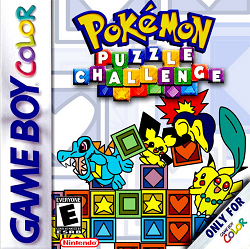 In this review, we match the tiles in the Game boy Color game Pokemon Puzzle Challenge. We find out how well this puzzle game plays.

Since this game is almost identical to the original Tetris Attack, we thought we’d focus on the differences this game has.

Since the screen space is so much more limited, opponents are represented by the life bar on the side during head to head competitions.

That’s about it. The similarities are so profound, you’d think this game just stripped out all the Yoshi characters, replaced them with Pokemon characters, slapped on a half-baked storyline, then ran with it.

It’s hard to really vouch for the difficulty because I happen to be a pretty decent player at this. For players newer to this franchise than me, the difficulty is probably about right. Arguably, this game is easier than the original Tetris Attack by a little.

Generally speaking, this is basically Tetris Attack in portable Pokemon form. The differences are minimal. Even the storyline is presented in a virtually identical style right down to the exclamation marks in the final stages. The limited screen space makes the game more limited in that opponents are reduced down to a mere power meter during play. If this game did more to separate itself from Tetris Attack, this might have been an entertaining play, but since it’s little more than a new paint job, it’s hard to find this game entertaining.

Graphically speaking, this game is alright for the format. It doesn’t necessarily wow me, but it doesn’t under-perform either. Decent enough.

The audio is probably the weakest part of the game. There really isn’t much to praise in terms of music because it is all so forgettable. This game likely would have been better served to just stick with one decent uniform set of sounds for combo’s and chains. The different Pokemon in this game largely make annoying sounds with few exceptions. Because of this, you are reduced to finding the Pokemon that will annoy you the least during play.

Overall, this game is just Tetris Attack in Pokemon and portable mode. The differences are so few and far between, it’s hard to get excited over this game. The limited screen space reduces opponents down to a simple life meter. The graphics are decent enough, but nothing to get excited over. The audio is a pretty weak part of this game as there is annoying sounds and nothing memorable in the music. If you are able to choose, stick with Tetris Attack as this game is just a stripped down inferior version of it.