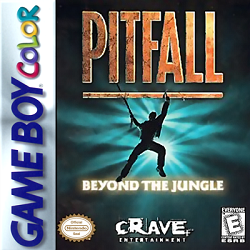 In this review, we get ready to jump into the Game Boy Color game Pitfall: Beyond the Jungle. We find out how well this adventure game plays.

Once again, you play an explorer as the main protagonist. Like previous games, you need to jump over dangerous pits and use vines to help you traverse some particularly treacherous terrain. You’ll also encounter various enemies who are more than willing to stop you dead in your tracks.

What’s new here is the fact that you are now armed with a small pickax. This weapon is mostly used to defeat enemies along the way. This item is also used to help you latch onto small objects as an alternate way to traverse particularly large gaps in the ground.

What is also new are humanoid enemies. These enemies will shoot things at you such as boulders and bursts of flame. The good news in all of this is that every regular enemy operates on a one-hit kill basis. So, it’s all about finding some good timing to jump in and strike before you get struck.

One thing that is also new to us is the life meter. In the first two games, you operate on a one hit kill basis as well. In this game, you get some forgiveness by having a small amount of health. If you make it to the end of the section, you’ll get your health replenished as well.

A final note on what is new are moving platforms. This is definitely new to us. While we don’t know what is found in the previous game, this is the first time we got to encounter these new obstacles.

In total, there are apparently 5 worlds. You get the initial jungle level, a cavern level, a volcano level, a jail level, and finally, a final confrontation. Each level has smaller sections in there to complete. Some levels require you to strike something or pull something down before advancing to the next area.

One thing I noticed with this game is the difficulty. This game starts off challenging and only gets tougher from there. Things like vines requires you to connect with the very end of it in order to grab a hold to. If you miss this small hot zone, you’ll find yourself flying into the pit and losing a life. Some jumps require near pixel perfect timing. Otherwise, you tumble down and lose a life as well.

What’s more is that controls can be a little sluggish. As you approach enemies, you may find that a single jump will cause you to not be able to attack for a brief period of time. I don’t know why attacking is so sluggish, but it really cramps your ability to perform well in this game.

Jumping can also be rather archaic. There is either a high jump or a long jump. Because of these limited options, you have to jump off of one platform at very specific spots do you don’t either under or overshoot the landing. This really only adds to the overall difficulty.

Another thing with this game is the fact that when this series first popped into existence, it was an impressive bit of innovation for the time. The extensive thought process that went into this was almost unheard of at the time for home consoles. Now, adventure games are much better laid out with significantly more content. while this game took strides to improve itself, it really doesn’t take enough steps forward to keep it in line with what was expected at the time for a handheld adventure game. There are free lives you can collect and a few other items, but most games feature power-ups, mini-games, and a whole lot more. This game scrapes by with just the basics which is pretty disappointing.

For a game with so few features, it’s surprising how much of a learning curve you are in for. Not only is it somewhat challenging to figure out what you are doing wrong with things like vines, but the levels themselves are designed to be tough already. It only gets more difficult from there. This leads to a sort of requirement for level memorization almost from the very beginning. While some games can get away with that in the earlier Atari days, this game simply can’t with what’s out there on the market.

Generally speaking, unless you are a huge fan of very tough games, this game can be a rather unforgiving experience. The difficulty of the levels alone makes for a frustrating play. The sluggish attack and often pixel perfect jumping only adds to the level of frustration many players are likely to experience playing this one. While this game does expand on the series, it only gets by with the basics, so there isn’t much in here that excites either. With a steep learning curve and level memorization adding to this games problems, this game ends up being difficult to really enjoy.

The graphics are nicely ramped up to at least some visual eye-candy. The animated backgrounds and moving vines are nicely animated. I wished I could say the same for enemies. Still, the main character is nicely drawn out. So, a pretty good job there.

The music is OK. There isn’t much that I can say is memorable, but it is decent to listen to when you are not screaming at the small scream because you died for the 25th time. The sound effects are well realized, though.

Overall, this game proved to be on frustrating and difficult game. The sluggish controls and required near-pixel perfect jumping only adds to that frustration. The level memorization requirement only adds to that frustration and difficulty curve. Unless you are into difficult games, this might not be a recommended game. While this game does build on what was previously seen in the series, it’s hard to see this as a game that really stands out in the crowd as well. So, the mechanics can be a bit dated. The graphics are pretty reasonable and the sound is alright. Still, not a game I would recommend playing for most players.

Overall
Furthest point in game: Died on the second part of the volcano level.