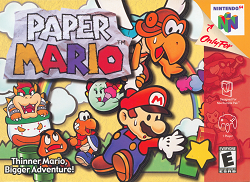 In this review, we take a look at the RPG game, Paper Mario. We find out if this game was a good second outing in the RPG genre for Mario or not.

This game was released in 2001 and is considered by many to be the spiritual successor of Super Mario RPG: Legend of the Seven Stars.

The plot begins with what sounds very similar to Super Mario 64: Mario receives a letter from Princess Peach to come to the castle for a party. You make your way to the castle where you eventually find Peach in the upper levels of the castle. Eventually, a massive earthquake (perhaps a subtle homage to the games predecessor?) strikes. This time, Bowser has managed to fit his castle underneath Peaches castle. The castle then flies Peaches castle in the air. Bowser eventually appears and reveals his evil plot of having taken the star rod from Star Haven. He eventually defeats Mario with his new found powers and ejects Mario from the castle (again, a similar plot element was found in the previous RPG title). Your mission after you regain consciousness is to free the seven star spirits who can combine and grant you powers capable of defeating Bowser.

Along the way, you get to meet with characters that can join you in your quest. Each character has certain abilities both in and out of battle. Gommbario, for instance, is a Goomba capable of offering small bits of advice as well as reveal damage meters on enemies in battle through his Tattle ability. Bombette, in the mean time, can blow up parts of cracked walls which permits Mario to access new areas. In battle, Bombette can blast away enemies. Parakarra is able to deliver letters (which can be useful in boosting your star piece collection as that is a common prize).

Unlike Super Mario RPG, you don’t actually form parties. Instead, it’s simply a Mario/companion system that loosely reminds me of the ability system from Kirby’s Dream Land 2. One interesting effect of this system is the fact that companions are technically invulnerable. They can be paralyzed for a set number of turns depending on how much damage is dealt. After the turns expire (or if you win the battle), your companion is able to fight again. The downside to this is the fact that if Mario runs out of hit points during battle, it’s typically game over for you and you have to go back to where you last saved. So the margin of error is, in a sense, narrower than before.

Beyond the companion/Mario system, the battle system was greatly revamped. Like Super Mario RPG, one of your attacks is through a hammer that you collect early in the game. The other main attack has been changed from punching to stomping. This does make sense given that Mario is more famous for stomping on enemies than punching to begin with. Unfortunately, the special abilities system seen in Super Mario RPG was completely stripped out of the game. It was replaced with a badge system that can, among other things, simply enhance your attacking and defensive capabilities. Flower points are retained here, but they are largely for Mario’s special abilities as well as special abilities for your companions.

As you rescue star spirits, you gain more star energy. You also gain a new star capability that costs a varying amount of power (the first star power you gain costs one full unit). After using your star power, you have to wait for that power to regenerate through turns in battle before you can use it again. Alternatively, you can sacrifice a turn by using focus which replenishes your star energy faster.

One notable thing is the removal of experience points. I think this actually is one of the changes that actually upset me a little. If you defeat an enemy, you gain star points. Get 100 star points and you go up a level. As you gain levels, it becomes harder to collect star points, though the 100 point goal remains throughout the entire game. If an enemy gives you 4 star points on one level, that same enemy may only give you 2 star points after a level up. Eventually, enemies will offer only coins and no star points. As a result, the game is artificially capped at level 24 for Mario. I don’t know why there was a need to fix this so that experience points needed to be dumbed down like this. The only rationale that comes to my mind for this is this obsessive need to be it’s own RPG system. I hardly think having to revamp the experience points system was necessary.

Another element that was dumbed down were the puzzles. Unlike before where some of the puzzles require a certain element of strategy or thinking, these puzzles are as simple as requiring you to use your companions special ability, pushing a block, or even simply clearing away bushes. The only real time you needed to think was navigating Dry Dry Desert – and that was simply trial and error that can easily be solved by a simple gridding technique on a per-screen basis.

There were side quests and small optional elements in this game, but besides the massive mail delivery chain, it was nowhere near on the scale of what was seen in Super Mario RPG. While still a positive thing to see (such as the quiz game show), it seemed less impressive then what was previously seen.

So, a lot of my criticism for this game stems from a general dumbing down of the game and the stripping of elements that didn’t really need to be stripped out. It’s not to say the game isn’t without positives though.

One positive element was the nice variety of companions. Between Watt that lights up certain areas of the game and Bow turning Mario invisible to avoid certain traps, there is plenty of visual stimulation to be had with this. Another area that I thought was nice was the upgrading system of the hammer and shoes. While a tried and true method, it was nice to see an old element back.

Another positive element was the use of dialogue. While there was no voice acting (surprising given other games that have been made before this one), the animated dialogue to represent emotion was a nice touch. The writing and overall plot was nicely done. While the humor was a bit more subtle than before, there is a certain element of personality that gives this game some charm. The plot was decent and the game was easy to follow. I didn’t really find myself lost at any point. This is unlike other RPGs where it’s possible to have a plot point give really vague clues which makes the game frustrating. I never really encountered this necessarily. At most, I had to do a little trial and error to narrow down the things I needed to do to advance the plot, but nothing serious.

Graphically, this game has strengths and weaknesses. The artistic style is definitely nicely done. The paper theme was an interesting twist to the game (though a tad unexpected in my opinion), it wasn’t all that bad. The animated emotions of both friends and foes were nicely drawn out. The mix of 3D elements and the 2D were well done. The effects were also a good thing to see. It was a risk to flatten more objects and make more 2D elements when on a platform more than capable of delivering 3D environments, but I thought the artistic style paid off well. One criticism I have is the map system which borders on useless. In fact, the map system on Super Mario RPG was both more useful and visually appealing than what was shown here in this game. Some of the textures sometimes became blocky, but that may be a hardware limitation more than anything else.

The audio was a bit more hit and miss then I would have liked. The sound effects of the text as well as many other things you can trigger were nicely done. The audio, however, was surprisingly bland. The only track I thought worked very well and stood out was the music when you battle Huff N Puff. Beyond that, the music was generally passable, but nothing too memorable. Disappointing considering how great the last game was in this department.

Overall, I don’t know if I’m the biggest fan of the direction this game series took between Super Mario RPG and Paper Mario. The artistic difference was one of those things that I wasn’t a huge fan of at first, but it did grow on me. The redoing of the experience points system was definitely a case of fixing something that isn’t broken. This was one of my biggest criticisms of the game. Things were dumbed down and stripped down. The overall experience was less rich as well. That’s not to say this game isn’t without its positives. The writing was good. The game was easy to follow. The emotion was very well realized in the characters in this game. So, while not an incredible game as I would have hoped, it was a good all around game. Certainly playable, just disappointing that it wasn’t as strong of a title as its predecessor.

Overall
Furthest point in game: Beat the game and capped out at level 24.