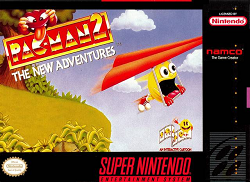 In this review, we check out another Pac Man game. This time, it’s Pac Man 2 – The New Adventures as released on the SNES. We find out if this adventure game means new entertainment or not.

This game was released in 1994 along side a version for the Sega Genesis.

This game differs greatly from the usual maze navigation that was a dominant feature in earlier games (such as Ms. Pac Man on the NES and Pac Man on the Atari 5200. Instead, it’s more of an interactive cartoon or adventure style game. It also differs in the fact that you do not control Pac Man. Instead, you control a slingshot that guides Pac Man along the path in this side scrolling game.

Along the way, you can help nudge Pac Man along in various ways. One example is shooting the milk and arrow sign so he goes in the appropriate direction after noticing. You can do other things such as feed Pac Man apples by shooting them out of the apple tree or shooting the crows which, while temporarily attacking Pac Man, knocks down objects from out of reach platforms.

You can also shoot Pac Man power pellets which will allow him to gain super powers like flying or the ability to eat ghosts.

For you, as a player, your main focus is essentially problem solving. Some of the solutions seem somewhat silly and hinges on the AI of other things on screen. For instance, if you shoot a poster near the door, you can distract Pac Man so that when he goes to fix the poster, the door opens part way by the person inside, allowing Pac Man to avoid getting hit. However, sometimes, the person opens the door all of the way. That means that whether or not you shoot the poster, Pac Man essentially dies from being flattened against the fence.

I found this element of the game – which is a dominant feature I might add – very frustrating. Sometimes, it takes several attempts to figure out what you need to do to allow Pac Man to avoid certain dangers. Unfortunately, sometimes the game changes somewhat and your solution doesn’t even matter on a particular attempt. So, overall gameplay was extremely frustrating.

What I found rather odd was the storyline. If you collect the milk from the cow and get Pac Man to return home, you’ll be treated to a cut scene where some mysterious entity is punishing the ghosts for allowing Pac Man to succeed in his first task. first of all, you never encountered them in the first place. Second of all, what does giving milk to a baby have anything to do with the enemies at that point? I found what little plotline I experienced to be puzzling and rather disconnected from the gameplay in general.

Graphically, this game was decent. There’s plenty going on and I found that there were very few repeating textures. There was a lot going on on screen, but I didn’t find it to be overly busy. It was starting to get close to being overly busy, but it doesn’t necessarily cross that threshold. Pac Man also has a wide range of emotions as well. There are numerous ways he can walk down the street. His range of physical emotions were really well done. So, the graphics were definitely above average here.

The sound, I felt, was this games strongest point mostly because of the voice acting of Pac Man. I don’t think they could have done a better job taking sounds found in the older games and translating it into something new like this. The music was decent, but does get a little repetitive after a while. Sound effects were otherwise decent.

Overall, the game had many strong points that contributed only marginally to the overall experience. The graphics and the way Pac Man was presented in this game was well done. Unfortunately, the game play left a lot to be desired. Sometimes, you find yourself stuck in a sort of infinite loop (biggest one for me was the rock and the skateboard in the park. I was able to get past it with the use of a power pellet, but that only sometimes works). It’s quite a shame such good talent in the graphics and audio department was wasted with such terrible gameplay. I can see it being possible to break away from the maze concept and trying something new, but I think this game was largely unsuccessful on that front. Wouldn’t recommend unless you are looking for an example where characters can convey emotion and reaction.

Furthest point in game: Made it to level 2 and ate two ghosts before being stuck on an infinite loop of tripping over a rock and getting hit by a skateboard.