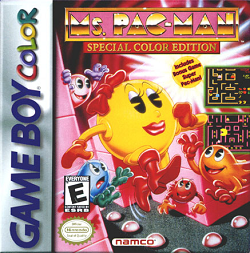 In this review, we work up an appetite for pellets in the Game Boy Color game Ms. Pac Man – Special Color Edition. We find out how well this survival game plays.

Since Ms. Pac Man is so similar to the Atari and NES versions, we thought we’d focus on the differences on this part of the review.

One difference is the fact that this game features an “arcade” mode and a “hard” mode. Arcade mode is supposed to be just like the original Ms. Pac Man game. The Hard mode seems to feature the more challenging mazes in the game instead.

Other then that, gameplay is largely the same.

The graphics are a slight improvement over the Atari versions. This is likely thanks to better hardware. Animations are much more smooth. The only real problem I have with the graphics is that it’s a little dated for a game released when it was. There is a lot of stark black backgrounds which makes things a little plain. So, an above average effort, but not exactly up to par with what people can expect in portable gaming by this time.

The audio is kept largely the same. On the one hand, you really do get an authentic Ms. Pac Man experience as far as sound is concerned. On the other hand, it’s not exactly up to the standards of a handheld game released when it was. So, a little outdated.

Overall, this game is a very true to original game. While there are a few small tweaks such as an additional difficulty and slightly improved graphics, a lot of what you got previously is found here. Unfortunately, it also makes this game fairly dated for the time. While the addictive play is there, the length will allow this addictive nature to wear off. Graphics are decent enough, but sound isn’t quite up to par. An overall fairly average game.

Some of the basics are still retained. You have to evade the four ghosts while going around as per normal and you must eat everything in the maze to advance.

What is different is what you eat. Gone are the pellets and, instead, you need to eat all the pieces of food in the maze. The food is locked away behind pixel-wide doors. To unlock them, you need to find the keys.

The keys are scattered throughout the maze on the floor. Each key will unlock either a single door or a small handful of doors. Eat up the keys to unlock the doors.

Once you have opened up certain doors, you can go in and eat everything inside. be warned, ghosts can follow you after, so you need to assess some risk before going in areas that have only one or two doors unlocked.

One thing that is new is the green pellets. If you eat one, Pac Man will grow twice as large. When you are this large, you can pass through ghosts without a problem. It is also possible to break through doors and eat the food you find at the same time. No key necessary. If you also eat a power pellet, you can defeat ghosts in the process. Just think if the green power pellets as temporary invulnerability.

One thing I found is that this game is certainly harder than the original Pac Man. Because of the complexity of the keys, you have to take the unlocking system into consideration while evading the ghosts at the same time. Because of this, you may find yourself losing lives a lot faster than normal Pac Man.

Another problem I have with this game is that the score isn’t really displayed until you pause the game. This makes it more difficult to assess your progress. If you fail to achieve the high score, and you forget to check before you lose your last life, you may never know what your score is. I found this to be a little annoying considering the importance of score in this game.

Generally speaking, Super Pac Man delivers a flawed Pac Man experience that can get old after a few rounds. The fact that this game was released when it was, this makes it especially difficult to really enjoy. The short time it takes to play makes this game a little more obsolete for a portable game of its time. While is it appreciated that I am able to play this version of Pac Man, I’m not sure this game really helped things along.

Graphically speaking, this game is very basic. While there are a few additional elements, there isn’t much here that makes me think this is a great game on this front. The smooth animations are about the only thing that can be said positive about this. The otherwise dated graphics just didn’t do much for me.

The sound effects are somewhat updated from the original Pac Man. There’s a few extra jingles that gives this game more personality. There is a panic jingle you hear when it’s likely you are about to lose a life. Still, it’s hard to look at this game and say it is impressive from an audio perspective. The dynamic music helps things along a little, but not by much. The sound effects are authentic, but otherwise very basic. Because of this, the audio is just sub-par for a game of its time.

Overall, this game tried to re-invent Pac Man, but simply delivers a more flawed and complicated style of play. Pac Man’s original strength is the simplicity and adding locks and doors somehow manages to make this game less appealing. The dated nature of this game just doesn’t help things much either. The graphics are pretty plain and the audio isn’t up to par for a handheld at the time. An overall average play.