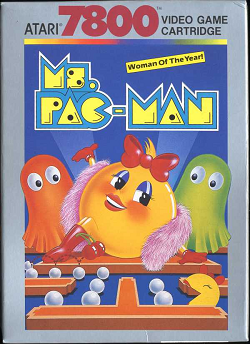 In this review, we chomp down on pellets to see whether or not this action game, Ms. Pac Man, is a worthy addition to the Pac Man series.

This port from an arcade game was released in 1986. According to some, this port replicates the arcade experience quite faithfully (perhaps, with the exception of a coin system of course).

The storyline is simply showing the growing relationship between Pac Man and Ms. Pac Man as highlighted in the cut scenes between certain levels. That’s, well, pretty much it.

You start with 5 lives and your task is to eat every pellet in the maze. The difficulty is the four ghosts who aim to stop you by intercepting you. If you come into contact with one of the ghosts, you’ll lose one of your free lives and you have to try and eat the remaining pellets with one of your remaining lives. Fortunately, you and the ghosts positions on the field resets every time you either beat a level or lose a life.

One important tool in aiding you little quest in this game are the power pellets in each of the four corners. If you eat one, the ghosts become blue, reversing the roles temporarily of all characters on screen. Now, if you come into contact with a ghost, it’ll be eaten for an additional boost in points, sending the ghost back to the center.

What also appears is one of the pieces of food that appear in the level. Consuming the food will only increase the score, so it’s not mandatory to actually eat it. Each level has a different piece of food.

As you progress through the levels, the maze changes both in configuration and color. What also changes is the speed in which everything moves. This cuts down on possible reflex times in the event a ghost takes an unexpected turn, forcing you to possibly backtrack to avoid getting killed. Another thing that changes and ups the difficulty is the fact that the effects of the power pellets last shorter and shorter periods of time.

I found this game to be an interesting play. The difficulty wasn’t too hard nor was it too easy either. The challenge factor isn’t pushover, but it won’t also cause you to throw controllers around the room either. So, I thought the difficulty was nicely set in the middle. It is also a nice short game too. You won’t spend weeks trying to play through this to get a good feel of the game. You can get a good idea after playing this game for about an hour or so.

Graphically, for a game of it’s time, it was decent. It’s not something to brag about, but it certainly wasn’t awful either. You can see what is what pretty well. So, it’s certainly workable.

The only music in this game is within the cut scenes between levels. Those were decent. The sound effects were decent enough. So, I’ll say it’s passable.

Overall, this is a fun little diversion. It’s not something I would find myself spending weeks playing, but it was kind of fun while it lasted.

Furthest point in game: Got to the 7th level (banana).