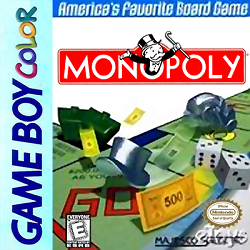 In this review, we pass Go in the Game Boy Color game Monopoly. We find out how well this board game plays.

this game was released in 1999. We previously played the NES version. That version was a very solid game. So, we thought we’d try the Game Boy Color version to see how it plays.

Under normal circumstances, if a previously reviewed version was similar, we would note the differences of this game. In this case, this version is pretty much identical, so we thought we’d offer a few comments on this game.

On the NES version, you could theoretically play for hours in a single game. this isn’t necessarily a problem because if you ran out of time for the day, you have the option to simply switch off the monitor and continue another day.

In this instance, however, you are playing a portable version. Often, you worry about battery life. What would have been nice to see is the ability to save the game. That way, if a round happens to drag on for a long period of time because of more or less deadlocked play, you can save the game and play this on another day.

On a brighter side, it is interesting to see this game come to a portable environment. This can definitely make long commutes more interesting.

A good strategy to employ is to buy as many properties as possible. This applies to a game with any number of opponents. Even if you have to mortgage a bunch of things to obtain that property, you do it. In one game, I had managed to buy a almost a third of the board. The only places that weren’t mortgaged was, as luck would have it, Park Place and Boardwalk. While plenty of players hit my property, they were able to land on those spaces for free for a while.

Eventually, after a few laps around the board, I was able to save up enough cash to keep pulling the mortgaged signs down one by one. Nickel and diming the opponents became my winning strategy until the last mortgage was payed off. I was able to work up the cash to buy houses and hotels. All it took was one or two rounds of landing on those properties by opponents before the hotels came up. From there, I just waited until a weaker opponent landed on one of those properties before I could scoop up the property and throw up more houses. From there, even for one of the opponents who had all four railroad stations, it was only a matter of time before I won.

Bottom line is that the more properties you have, the more likely opponents will find themselves paying you. It is more than possible to see an opponent pass Go, collect $200, land on your house filled property and had that cash straight to you after. Yes, the game has a lot to do with luck at the beginning, but it’s all about tilting the board odds in your favor.

Generally speaking, this can be quite the entertaining game. Since so much is automated, you do save time. While the NES did allow for 8 player games, having the upper limit set to 4 instead isn’t all that noticeable. It would have been nice to see a save function, but that is about it.

Graphically, this game is very similar to the NES. While there are differences, there isn’t much that is particularly noteworthy. The most that this game is different is that the computer opponent portraits are a little more simplified and the money that gets paid out are now all just green bills.

The audio is pretty much the same. What would have been nice to hear is some subtle music in the background during play. The jingles, sounds, and intro music do make up a lot of ground in this, though.

Overall, this is an enjoyable game to play. While some of it revolves around luck, there is still strategy one can employ. Whether you are playing a simple two player game or trying a four player challenge, this game manages to be an interesting play. It would have been nice to have a save system for the sake of battery power, but that’s really the only complaint I have about this version over the previous version. Graphics and audio are pretty much the same as the NES version. A good game all around.

Overall
Furthest point in game: Beat the computer players in both a two player match and four player match.